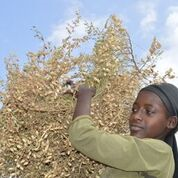 This was the outcome of a research collaboration between International Center for Agricultural Research in the Dry Areas (ICARDA), Ethiopian Institute of Agricultural Research (EIAR) and ICRISAT. The breeding lines for these varieties were provided by ICRISAT and ICARDA. Chickpea crop improvement research collaboration among the three institutes has led to the release and promotion of more than 20 varieties in Ethiopia so far.

HORA (DZ-2012 CK-001/FLIP 04-9C)
The HORA variety is mainly proposed for its reasonably good grain yield in potential chickpea growing areas. Its seed yield advantage as compared to the standard check (Ejere) is 22.9% and local check (DZ 10-4) is 70.39% higher.

No fertilizers, irrigation or pesticides were used on any of these varieties to achieve the increased grain yield during the trails. When compared to standard and local checks, all three varieties showed promising results on disease resistance.

The National Chickpea and Lentil Research Program,DZARC, will maintain 50 kg breeder seed of these varieties every year and plans are underway to get these varieties into sustainable seed systems and promotion under Tropical Legumes-III and USAID scaling projects.

“Tropical Legumes Phase III (TL-III) project funded by the Bill & Melinda Gates Foundation presents an opportunity for different CGIAR centers to synergize their comparative advantage and expertise for the benefit of the smallholder farmer. Apart from ICARDA and ICRISAT, others like International Center for Tropical Agriculture (CIAT) and International Institute of Tropical Agriculture (IITA) were also involved in working together with their respective mandate legumes while exchanging experiences and lessons for the benefit of smallholder farmers in the dryland tropics,” said Dr Emmanuel Monyo, Theme Leader- Seed Systems & Project Coordinator, TL-III, ICRISAT.

Ethiopia supplies more than 60% of Africa’s global chickpea exports. In Ethiopia, 80% of the chickpea is marketed locally while 20% is exported mainly to Asia and Middle East. With this, the net
household income from chickpea trade is estimated at US$1,500-2,000 per ha.