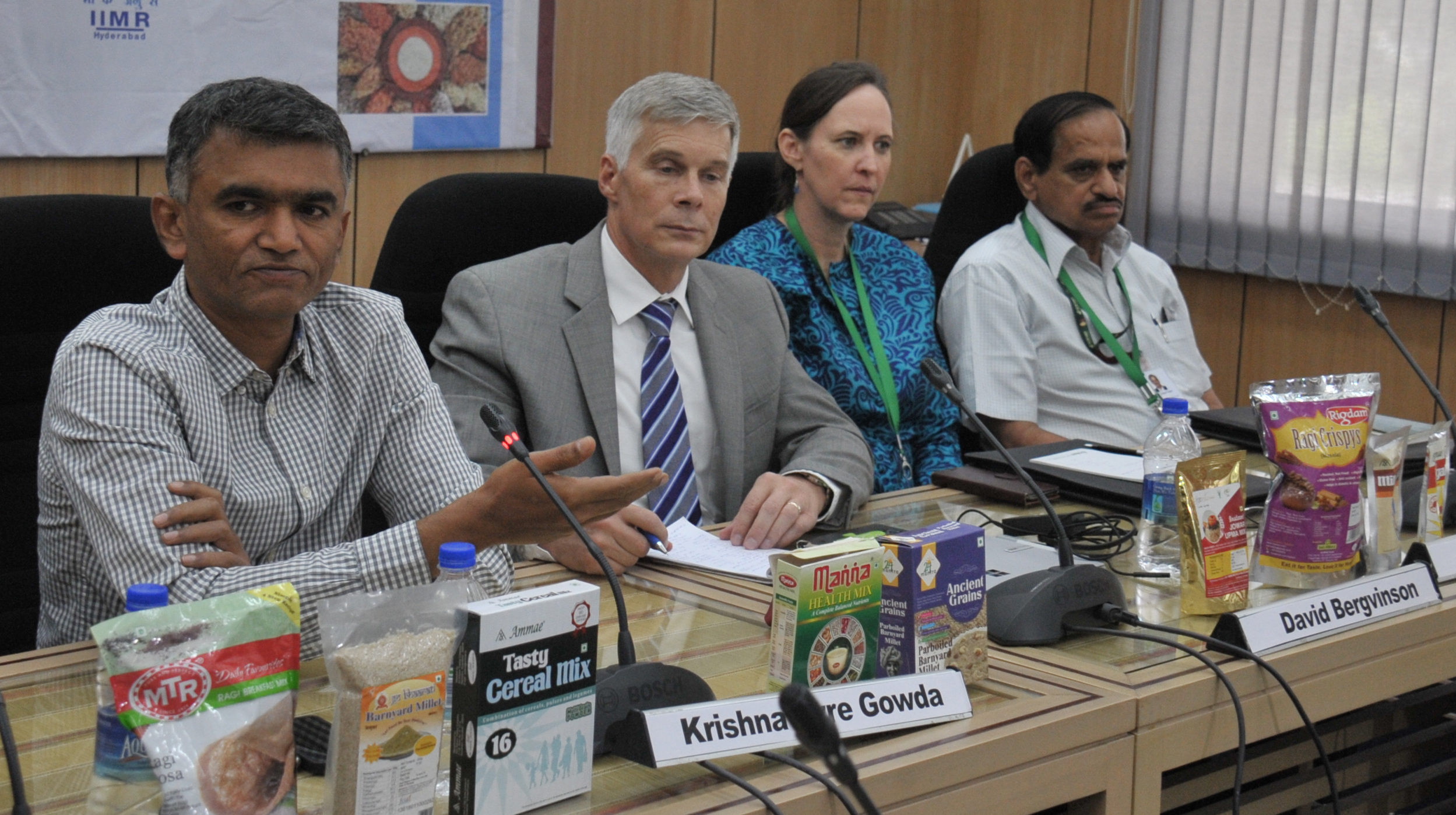 Hyderabad, India (19 August 2016) – A new initiative was launched today to popularize millets through product development as well as branding of Karnataka ragi (finger millet). This is driven by the Indian state of Karnataka, following an intense day of insights from food processors on the major hurdles they face and the market opportunities identified. The Government of Karnataka will partner with the International Crops Research Institute for the Semi-Arid Tropics (ICRISAT) and Indian Institute of Millets Research (IIMR) to bring this to fruition with strong support from the industry.

Commonly seen as a traditional food for the poor, with low investment along the value chain, millets face many challenges to reach its full potential. This perception is set to change, as the health and environmental advantages of millets are being recognized by the governments and other actors in the food industry.

As Karnataka is the highest producer of ragi in India, producing around 70%, an additional complementary initiative is to brand Karnataka ragi to build a unique image to further develop consumer interest in ragi.

“Millets are good from multiple points of view. So far our efforts have focused on the supply side and there’s been considerable success in increasing yields and more resilient varieties. But I feel the demand side has hardly been touched at all. We need a pull from the market to sustain the supply side. Ragi compares well on most accounts with quinoa and compares better on many other accounts. So what is holding the ragi back? That’s what we want to find out and overcome through this initiative,” said Krishna Byre Gowda, Hon’ble Minister for Agriculture, Government of Karnataka.

The Government of Karnataka has been a leader in India in scaling up technologies with farmers, through mega programs over the past six years. These include Bhoochetana, Bhoo Samruddhi and the recently launched, Golden Agriculture Village Scheme. The Karnataka government is now keen to ensure that these efforts are fully capitalized on, by investing in demand driven initiatives.

The action plan includes building a public private consortium of partners to focus on the demand pull for millets through real actions. A more detailed road map will be planned over the next few months and once there is clarity on the best strategy to raise awareness and create a buzz around millets and especially the key messages for millets, the Karnataka government will have a larger workshop in Bengaluru with a wider range of stakeholders.

“There is a need to change the image of millets. Make them more modern and create a buzz around them. Developing appropriate consumer products is a key component to achieve this. That’s why we have started a Smart Food campaign with a motto; good for you, good for the planet and good for the smallholder farmer. They are highly nutritious and have health benefits, use less water and have high drought tolerance and increasing their market value benefits farmers,” said David Bergvinson, Director General, ICRISAT.

Dr B Dayakar Rao, Principal scientist at IIMR believes “There are many reasons why millets are not a regular product in the consumer basket. One of the reasons is the fact that not many processing technologies have been developed yet. It’s not enough to just brand a commodity and take it to the market, an entire value chain is needed. We are doing that and I am confident this partnership will make millets popular to consumers.”

Some challenges identified at the workshop included:

Participants of the press invitation.