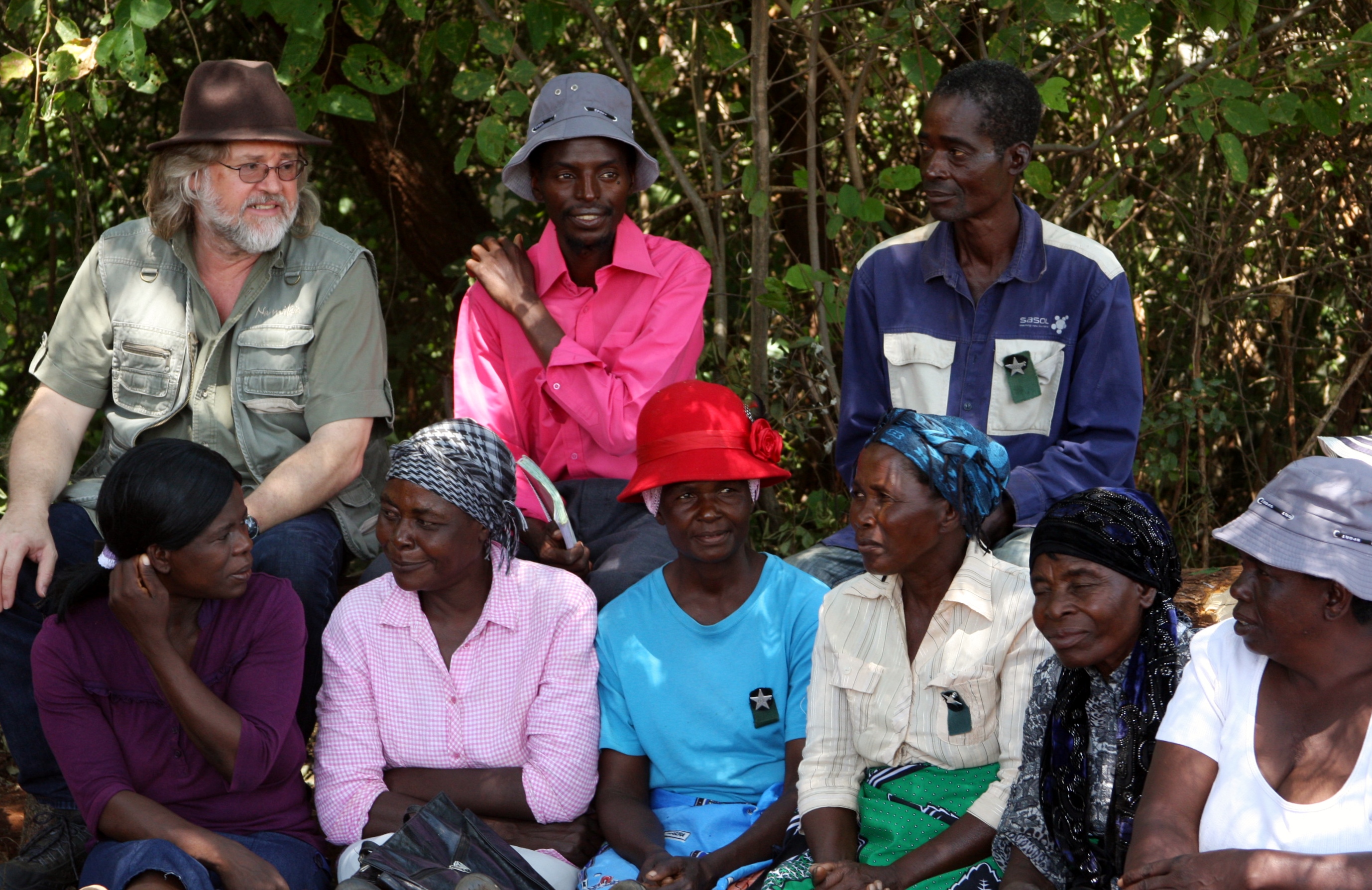 Mid-way through a meeting between local farmers and close to 30 national and provincial level participants attending a three-day country strategy development workshop with ICRISAT in Zimbabwe, someone asks the golden question:

“Is this irrigation scheme making money for farmers?”

There is no hesitation in her voice as Sihle Sibanda (40), a single mother and chair of the Silalatshani Irrigation Scheme for the last six years, sits up on her knees, her hands clasped to her chest, and answers for the group: “Because of this irrigation scheme, I have a 21-year-old daughter in her second year of university.” The 13 other farmers gathered under the trees nod solemnly.

For many, including project leader, Dr A.F. van Rooyen, this single statement encapsulates it all.

And indeed the Silalatshani Irrigation Scheme, which aims to increase water productivity through on-farm monitoring, adaptive management and Agricultural Innovation Platforms, is a poster child for successful projects in this semi-arid province in south-western Zimbabwe, addressing issues from gender empowerment and capacity building to self-determination and learning.

“It’s a scheme which starts at the micro level, with nutrients, and ends at the macro: with national policy on how we manage water,” says Dr van Rooyen, a sentiment underpinned by the irrigation scheme’s marketing committee secretary, Mr Sergent Nkomo, who tells the gathering: “We are always learning.”

At the beginning of the information day, and once introductions have been made, Sergent demonstrates this learning by taking time to explain the functions of the water and solute monitoring tools which have been introduced to the scheme by the project partner, CSIRO, from Australia.  ACIAR, the project funder, recently extended funding for the project for a further four years. A farmer with the Chameleon, a tool that measures moisture availability. Photo: Violette Kee-Tui .

The Chameleon, named by the farmers for its ability to change colour according to moisture availability, and the Full Stop, a water front detector designed to measure nutrients at different depths, as nutrients are flushed through the profile if “over-irrigated”, are used in conjunction with one another to provide information on when to irrigate, and ultimately increase water and soil productivity.

Sergent, a third generation farmer, says his foreparents worked on this scheme, one of the oldest in the country. “And we are now working on it, but we can see that there’s a big difference between how our parents did it and now. Growing up, I knew it was Friday so we must irrigate. We didn’t think of fertilizer being washed away when using excessive water. Education has given us the power to change things,” he says.

In Sergent’s capacity as marketing committee secretary, and under the auspices and guidance of the Agritex Extension officer, Mr Stanley Dube, the farmers have now moved away from the previous crop rotation and are now investing in cash crops such as garlic, sweet potato, groundnuts and sugar beans, and are learning how to source their own markets.

“Since the Innovation Platforms in the irrigation schemes, we’ve seen many changes take place; for example, farmers are no longer sticking to the cropping calendar, but rather looking for crops and markets which earn them more money,” says Mr Dube

“We give farmers that freedom to choose, to determine their own future, and what we’re finding is that they are on one hand cutting down on their water usage by almost half using the Chameleons and Full Stops, and on the other they are finding the confidence and capacity to find new markets for themselves,” he says. This new found confidence is reflected in the farmers’ enthusiasm for the continued use of these tools that they clearly indicated their preparedness to pay for to access. This, he said, allayed fears of national policy makers that the farmers were developing a culture of dependency.

According to Dr van Rooyen, “When people say that organizations must give farmers the capacity to make their own market linkages, that is exactly what the IP is doing. We are not advocating people to drop this crop, or take up that one. Through the IP, which includes all stakeholders from the farmers to the water authority, the agricultural extension officers and the market players, the farmers find a way, based on information and learning to make their own decisions on what to grow and where to invest,” he adds.

“In terms of finding their own markets, it’s been a real game changer. Now farmers have the capacity to look for those markets, to invite market players themselves and build their own knowledge base, developing social skills to make their own contacts…and contracts. If you want to draw up a contract with them, they want to be part of the draft of that contract; they are no longer willing to put their signature on anything without fully understanding or being a part of it.”

By no means, however, does this mean the irrigation scheme is devoid of challenges for the farmers. They include issues with the local water management authority, tenure issues, lack of inputs, unpredictable weather, a shortage of markets and a shortage of the Chameleons, meaning the few they have need to be shared out by many farmers. However what emerged beyond the conversations was that this was a united and strong body of farmers, not only able to work together but to express their views freely, articulately and with the dialogue open with all stakeholders, especially the water management authorities, and to pull together and speak with one voice to avoid a situation where they needed to receive drought relief like many other areas in the country.

In the words of Stanley Dube, the meaning of the name Silalatshani is to rest on the grass, but since the project came along four years ago, there has been no more resting.

“As the women told me themselves not long after the project began, ‘Like our crops, we have grown,” adds Dr van Rooyen.’

What the field day participants had to say

“I was impressed by the fact that the farmers have adopted the tools so well and have cut back by half the opportunities to irrigate. The tools have obviously worked well and although there is still a great deal of work to be done, they are on the right track.”

“Although they are having challenges, particularly with the issue of water from the management board, it is good to see how well they have adopted the IP process and the devices, which have clearly added value. The challenge will be supplying them with enough devices to service all the farmers, but it was gratifying to hear them say, when asked, that in using the tools they have seen the returns on their investments in terms of saving labour, increasing income, improving their farming methods and increasing their learning, and that they would be quite willing to pay for them.”

“I asked the question about gender in the discussion with the Agritex officers before meeting the farmers, and I was gratified when we arrived at the meeting to see the women farmers not only present, but also so strong and so confident. The project has clearly empowered them.”