Millets taken on a road show pan-India in lead up to an international fair – ICRISAT
SCIENTIFIC INFORMATION BY:
Topics
Crops
Location
Systems
Resources 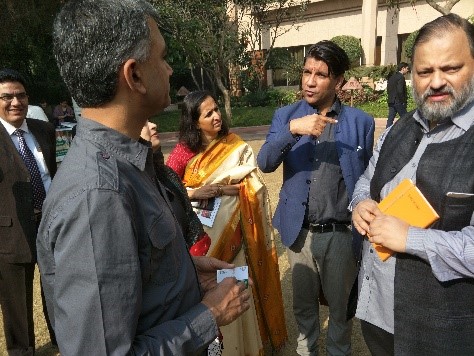 Karnataka state’s Minister for Agriculture Mr K Byre Gowda has taken on the cause of millets, stepping outside the traditional focus on production and even the state. Instead, he advocates the need to support and drive the whole value chain right from consumers through to farmers. Also acknowledged is that we are players in a bigger system and hence the imperative to work and influence outside our comfort zones. This is what has driven him to undertake a travelling road show around India and to spearhead an Organics and Millets International Fair that will take place in January 2018.

Minister Gowda talking at the Hyderabad road show.
Dr Ashok Dalwai, Chair of the Committee on Doubling the Farmers Income, and CEO of the National Rainfed Area Authority (NRAA), highlighting the value of millets in the dry rainfed areas.
Dr Vilas Tonapi, Director, Indian Institute of Millets, talking on the health and other benefits of millets.
Dr Bhaskarachary, National Institute of Nutrition, talking on millets.

At each city a sneak preview of a consumer survey is being released. 15,501 consumers were interviewed face to face across 7 cities in India, about their knowledge and consumption of millets.

Some early insights from the survey reveal a large gap between people who consider themselves reasonably or very health conscious and those who were sure millets are healthy. This uncovers  a vast potential to increase consumption through awareness. In many cities, the leading reason respondents gave for eating millets was, “I have a health problem”. Another major reason was that “No one else at home eats it.” This shows the potential for a multiplier effect for any marketing of millets given the right person who influences home consumption is targeted. The full survey report will be released early 2018.