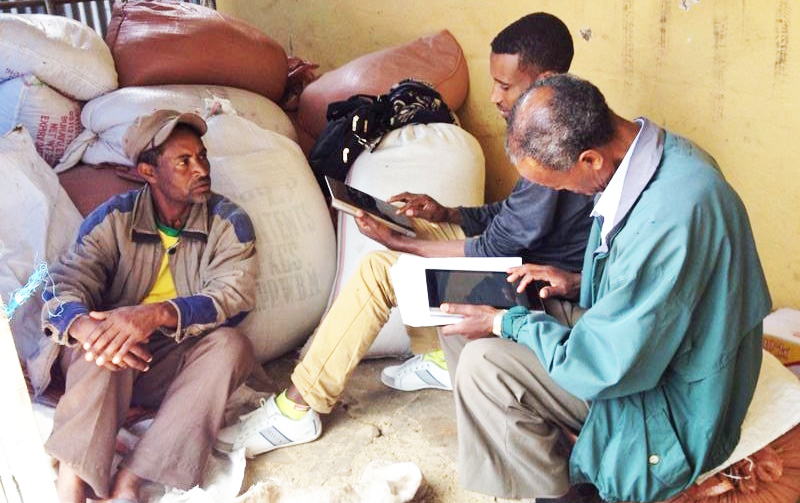 Hyderabad, India (16 December 2016) ― A new study by a team of researchers establishes the welfare impacts of improved chickpea adoption in rural Ethiopia. They found that an increasing number of farmers adopted improved varieties in their focus areas in the Shewa region between the 2006-07 and 2013-14 seasons and the research demonstrates positive linkages between technology adoption and household incomes of smallholder farmers.

In the study, published in the prestigious journal Food Policy (http://dx.doi.org/10.1016/j.foodpol.2016.11.007), the authors from the International Crops Research Institute for the Semi-Arid Tropics (ICRISAT), including Simone Verkaart, Bernard G. Munyua, Kai Mausch, and Jeffrey D. Michler, provide rigorous evidence on the impact of adoption of high-yielding, drought-tolerant chickpea varieties on poverty reduction in Ethiopia.

“In 2006-07 only 30 percent of farmers planted improved chickpea. By 2013-14 this share rose to almost 80 percent. Furthermore, many households started planting chickpea, bringing the share of chickpea growers up to 90% from an initial 65%. The area dedicated to improved chickpea moved up from 0.17 hectare average to more than 0.4 hectare by 2014. We found that improved chickpea adoption significantly increases household income while also reducing poverty.  Overall, increasing access to improved chickpea appears to be a promising pathway for rural development in Ethiopia,” said Kai Mausch, ICRISAT, Kenya.

One of the poorest countries in the world, Ethiopia is highly drought prone, and its agricultural sector accounts for 85% of employment figures. A steady increase in population (expected to grow to 160 million by 2050) has meant further fragmentation of land-holdings, making it critical for the government and development agencies to focus on increasing the productivity of small landholders through the use of new technology (including high-yielding varieties).

The nutritional value of legumes is well documented, with the 68th United Nations General Assembly declaring 2016 the International Year of Pulses. The research under ICRISAT’S Tropical Legumes II project (TLII), with the Ethiopian Institute of Agricultural Research, used rigorous and innovative methods to compute the impact of adoption, while accounting for possible errors from access to technology transfer and improved seed. On the basis of their observations, the authors concluded that improved chickpea adoption significantly increased household income while also reducing poverty. Controlling for all other factors, the study found that a 10 percent increase in the area planted with improved chickpea is associated with a 12.6 percent increase in income per capita.

Average adoption rates for improved chickpea varieties in Ethiopia remained much lower than those in the area under the study. However, Simone Verkaart, ICRISAT, Kenya cautions, “while this success story looks very promising for large parts of Ethiopia, attempts to increase the coverage to other chickpea growers or to non-chickpea growing regions should be preceded by careful economic and agronomic assessments to ensure replicability. While the upsides are evidently clear to farmers, traditional knowledge and market access may differ, which could change the outcomes.”

Policies that specifically target the poorest and remove obstacles for the diffusion of improved chickpea varieties, along with efforts targeted at building partnerships along the value chain, may go a long way in promoting smallholder welfare through adoption.

The study was made possible through the financial support provided by the Bill and Melinda Gates Foundation, ICRISAT and the Netherlands Junior Professional Officer (JPO) program. Further, the authors were supported by the Debre Zeit Agricultural Research Center (DZARC) of the Ethiopian Institute of Agricultural Research (EIAR), and their respective institutions in conducting the study.