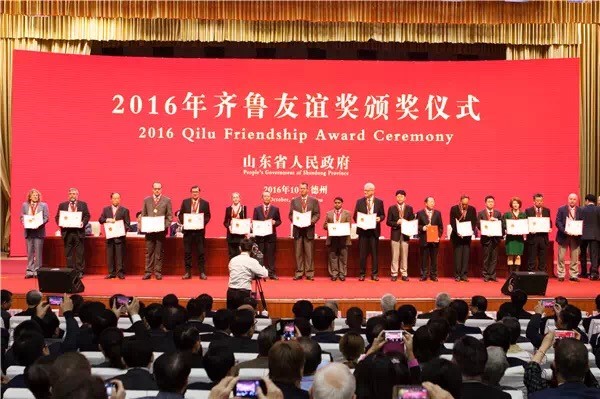 The award was given by Deputy Minister of Ministry of Human Resources and Social Security of People’s Republic of China and Administrator of State Administration of Foreign Experts Affairs, Mr Zhang Jianguo and Vice Governor of Shandong Province, Mr Sun Wei, responsible for the work of science and technology, environmental protection, government’s legislative affairs in presence of several high level government officers in Dezhou, Shandong Province, China.

Qilu Friendship Award is the top award given to foreign experts for their outstanding contributions to Shandong’s economic and social development and conferred on around 20 experts each year. Dr Varshney was among those 20 experts who stand out of the 25,000 foreign experts working in Shandong.

Decoding peanut genome and its application to understand the geocarpy, oil biosynthesis and allergens was the recent landmark discovery, published in PNAS journal,  that was coordinated by Dr Varshney and his collaborators from SPRI, Shofine Seeds Co., CRI and Millennium Genomics.

After receiving the award, Dr Varshney said, “I would like to take this opportunity to thank colleagues and collaborators from China especially from SPRI, SAAS, CRI, Oil Crops Research Institute (OCRI) of Chinese Academy Of Agricultural Sciences, and Millennium Genomics for their great collaboration that we were successful to decode the ancestor genome of groundnut and use this information for understanding basic biology as well as applying in breeding.” Director General, SPRI, Dr Hongjun Zhao congratulated and felicitated Dr Varshney in Qingdao and said, “This award is a recognition of hard work and contribution to China.  SPRI, SAAS as well as the country has more expectations from you now. We look forward to have more collaboration with you and ICRISAT”.

Dr David Bergvinson, Director General, ICRISAT while congratulating said, “The groundnut genome is extremely complex and a ‘tough nut to crack. It was a tremendous achievement on the part of the entire team. Dr Varshney’s tireless commitment to genomics and applying the latest science to ensure ICRISAT’s mandate crops keep pace with the big 3 cereals is truly commendable”.

Dr Varshney has been working at ICRISAT for last 11 years. He has led several international genome sequencing consortia to decode genome sequences of dryland crops.

ICRISAT is the only CGIAR centre and one of few centres to lead genome sequence of several dryland crops like groundnut, pigeonpea, chickpea, groundnut and pearl millet and published several research papers in the topmost research journals of the world such as Nature Biotechnology, Nature Genetics, Proceedings of the National Academy of Sciences (PNAS).