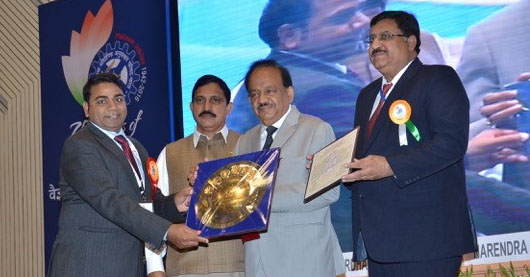 Hyderabad│Delhi, India, (27 September 2016) ― India’s Prime Minister Narendra Modi has recognized the importance of genomics breeding for advancements in agriculture, through an award to Dr Rajeev K Varshney, Research Program Director- Genetic Gains at the International Crops Research Institute for the Semi-Arid Tropics (ICRISAT). The Shanti Swarup Bhatnagar (SSB) was awarded to Dr Varshney for his contribution to decoding the genome sequences of three important crops – pigeonpea, chickpea and groundnut and identifying genes with traits to develop more resilient varieties.

Prime Minister Modi emphasized the need to double the income of farmers by 2022 and also highlighted the importance of science to produce more pulses in rainfed conditions, at the 75th Foundation Day of the Council for Scientific & Industrial Research (CSIR) in New Delhi on 26 September.

He added “per drop, more crop,” our objective should be to move to “an inch of land, and a bunch of crops”. The prime minster also talked about “time bound delivery of scientific results”, of which, “a successful technology is one which provides benefit to the common man.”

After receiving the award from Dr Harsh Vardhan, Union Minister of Science & Technology; Shri YS Chowdary, State Minister of Science & Technology; and Dr Girish Sahni, CSIR Director General, Dr Varshney said:  “I would like to thank colleagues and collaborators from ICRISAT and its partners for their contribution to reach this stage where we have started to see results of genomics-assisted breeding in the fields.”

Molecular markers have been used in developing superior lines of chickpea and groundnut seeds through breeding. Molecular breeding lines for drought tolerance in chickpea and for foliar disease resistance in groundnut have already been transferred to the All India Coordinated Research Project (AICRP) on Chickpea and Indian Council of Agricultural Research (ICAR), respectively.

Pigeonpea, chickpea and groundnut are among six mandate crops of ICRISAT, besides sorghum, pearl millet and finger millet.

“The power of genomics science (upstream research) and collaboration with advanced research institutes and national partners, especially ICAR and State Agricultural Universities, has made it possible for us to make a quantum leap in genomics research and molecular breeding in dryland tropics,” said ICRISAT Director General Dr David Bergvinson.

Dr Trilochan Mohapatra, Director General, ICAR and Secretary, Department of Agricultural Research & Education said, “This award is not just in the recognition of hard work and the contribution of Dr Varshney but also for the agricultural research fraternity of India.”

Dr Varshney has been working at ICRISAT for the last 11 years. He has led several international genome sequencing consortia to decode the DNA of dryland crops. ICRISAT is the only CGIAR center and one of few centers to lead genome sequence of several dryland crops like pigeonpea, chickpea, groundnut and pearl millet and has published several research papers in the top research journals of the world such as Nature Biotechnology, Nature Genetics.

The SSB Award is most coveted and often dubbed as the Noble Prize of India in multidisciplinary science. The prize is awarded on the basis of contributions made through work done in India during the five years, preceding the year of the prize. The prize comprises of a citation, a plaque, and a cash award of ₹5 lakh (US$7,400). In addition, recipients also get ₹15,000 (US$200) per month up to the age of 65 years. Dr Varshney is one of a few agricultural scientists who has been conferred this prestigious award.