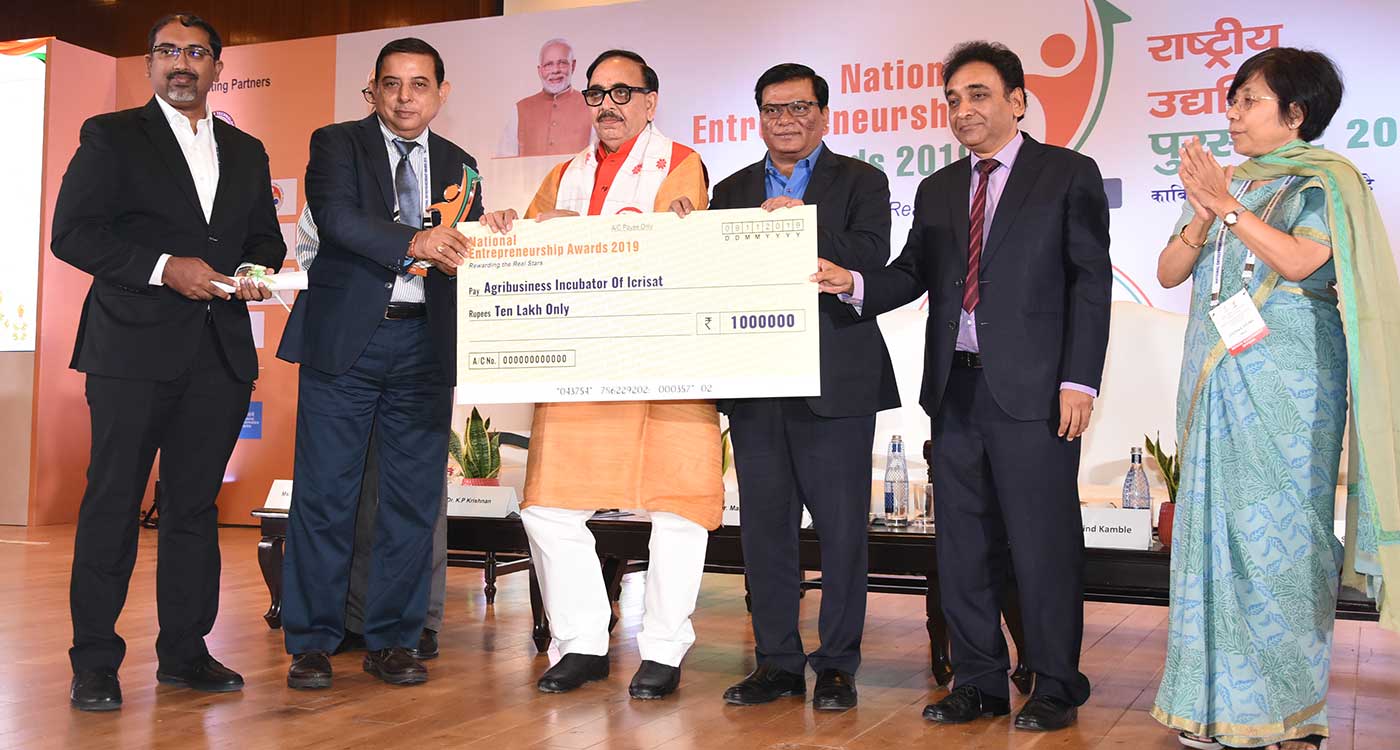 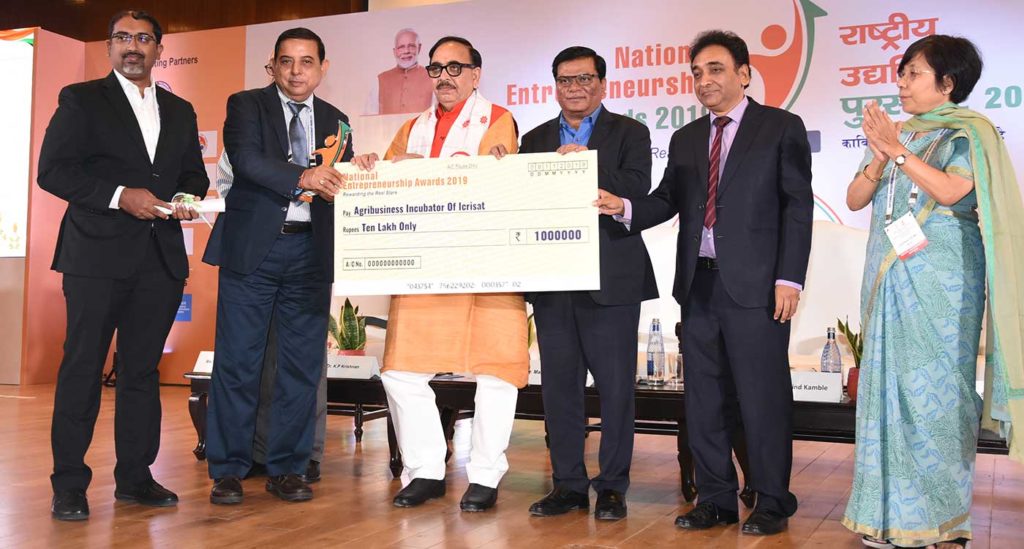 ICRISAT’s Agri-Business Incubator (ABI) was recently recognized by the Indian government with a top accolade for its contributions towards entrepreneurship promotion in India.

The recognition came in the form of a National Entrepreneurship Award that is given annually by the Government of India’s Ministry of Skill Development and Entrepreneurship (MSDE). ABI was declared winner for this year’s award in the Ecosystems Builder category.

Dr Mahendra Nath Pandey, Minister of State for Skill Development and Entrepreneurship, handed the award to Dr Kiran Sharma, Deputy Director General-Research, ICRISAT, and Jonathan Philroy, Manager, ABI. The incubator is a part of ICRISAT’s Agribusiness & Innovation Platform, which in turn is a part of ICRISAT’s Innovation Systems for the Drylands (ISD) Research Program.

“While recognizing the contributions of ABI to the agri-entrepreneurship ecosystem in India, the award also recognizes the longstanding commitment of ICRISAT and its partnering institutions to support agribusiness
in Asia and Africa, which eventually benefits the farmer,” Dr Sharma, who also heads the incubator, said about the award.

Recognized as the first agri-sector focused technology-based incubator in India, ABI was created in 2003 by ICRISAT with support from the Indian government’s Department of Science & Technology. Over the years, ABI has supported 103 ag-tech start-ups and enterprises from ag-biotechnology to food processing to digital agriculture domains across India.

Start-ups supported by ABI have been able to create over 2,500 direct jobs and mobilize more than US$ 25 million in funding, benefiting over three million farmers in 2018-19 alone. The incubator has helped its incubatees file for 12 patents and trademarks in the last three years. Over 5,000 individuals were trained in agribusiness promotion, skill development, technology commercialization, incubation management and other areas of agribusiness. A growing partner network of governments, mentors, investors and service providers help the incubator in its mandate.

To promote agri-focused enterprises by developing agribusiness incubator networks in India and Africa, ABI mentored 22 incubators in Indian Council of Agricultural Research (ICAR) institutions and State Agricultural Universities, and 11 agriculture value-chain and food processing incubators in eight African countries under initiatives of the Forum for Agricultural Research in Africa (FARA) and the Indian government respectively. These initiatives have since been scaled-up by ICAR, India’s Ministry of Agriculture & Farmers’ Welfare and the African Agribusiness Incubation Network.

ABI has also supported 16 Farmer Producer Organizations (FPO), comprising around 3,000 farmer members in Telangana, Andhra Pradesh and Tamil Nadu on business development models, besides training the FPO management on operations and sustainability. The incubator is also an outreach center to the Government of India’s initiatives on enterprise and innovation promotion.

“Given the focus on start-up promotion and skill development by the Government of India, ABI-ICRISAT is looking to support another 100 ag-tech start-ups in the coming five years to benefit 10 million farmers in dryland tropics and generate over 5,000 jobs in the non-farm sector,” Dr Sharma said while referring to the incubator’s objectives in the coming years.