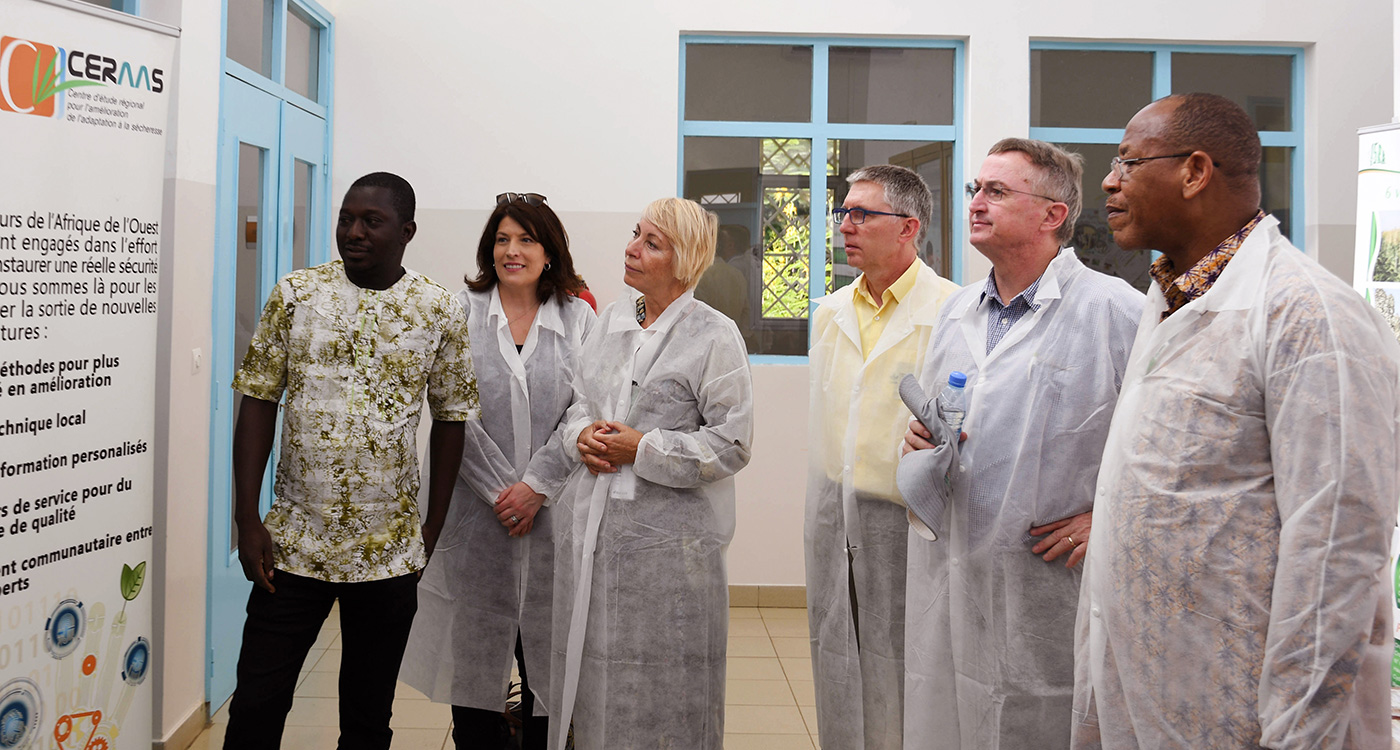 Governing Board meeting in Senegal: The strategic plan for 2020 and beyond 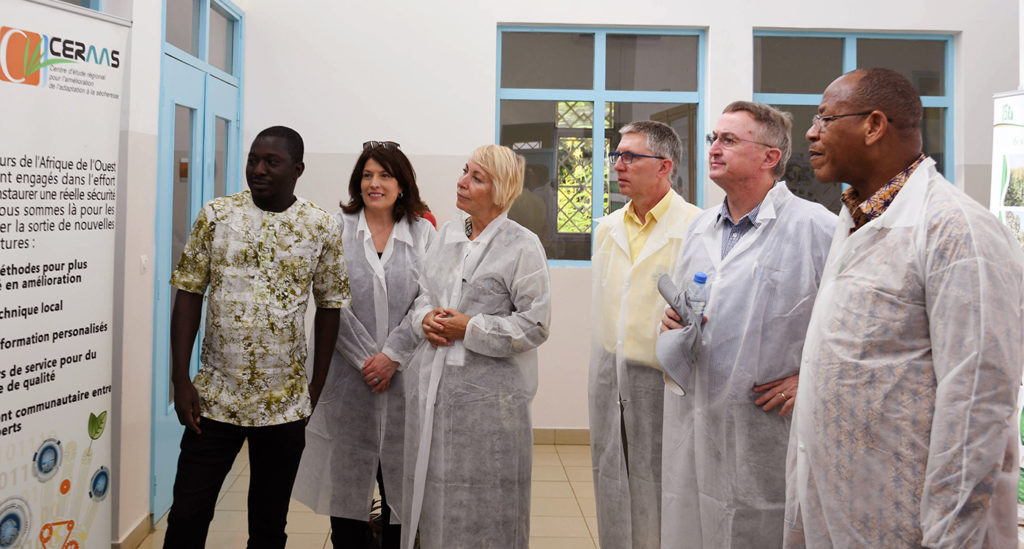 As members of the ICRISAT Governing Board converged in Dakar, Senegal, the air was abuzz with the promise of upcoming strategies for a focused approach to the next few years. During the next few days, over a series of meetings and discussions, topics ranging from nutrition, systems research (including socio-economics), digital agriculture and outreach to priorities in each of the research programs were covered in depth. Each research area gave a presentation on options for strategic directions and presented detailed analyses on strengths, opportunities and plans to tackle weaknesses and threats, as well as to capitalize on the opportunities and strengths. A Strategic Plan will be formulated following some more inputs.

Reinforcing ICRISAT’s engagement with the national systems and other partners, was one of the key points of discussion. Part of this was understanding the partners’ strengths and weaknesses and complementing them. One highlight was the signing of an MOU with the Senegalese Institute for Agricultural Research (ISRA) to extend collaborations. 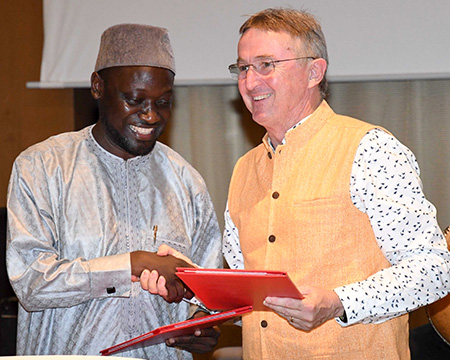 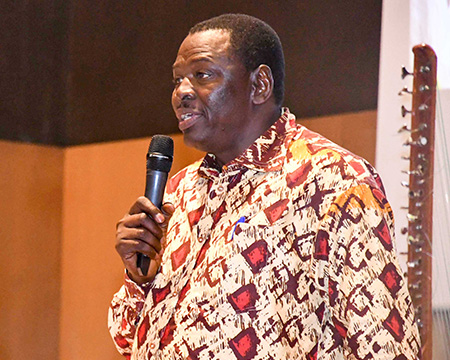 It was a packed schedule for the Board members, with field trips, presentations from partner institutions, and social engagements. Partners included ISRA, CERAAS, CORAF/WECARD, MANOBI, ANACIM and more.

Board members visited ISRA in Bambey and the Centre d’étude regional pour l’amélioration de l’adaptation à la sécheresse (CERAAS). One key focus was to explore new opportunities for collaboration and sharing of expertise and resources toward a stronger regional breeding program. 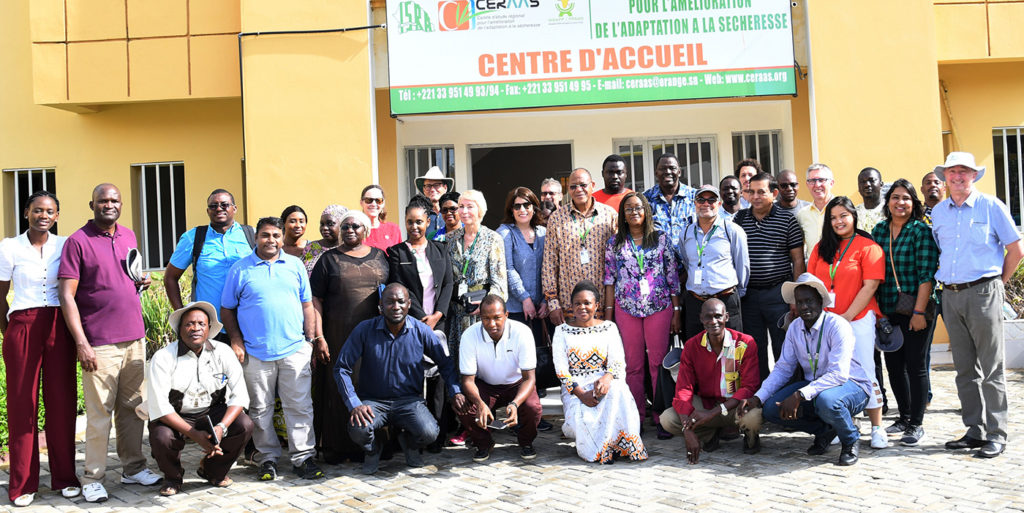 The meeting also discussed ongoing collaborations and projects between ICRISAT, ISRA and CERAAS. “As a center of excellence, CERAAS could be a great entry point and a good platform for a regional breeding program that will meet the needs of partners, mainly the smallholder farmers,” said Dr Ndjido A Kane, geneticist and plant molecular biologist, CERAAS. To conclude the field visit, the Board members had some interactions with men and women farmers who are participants in ISRA activities in Senegal. 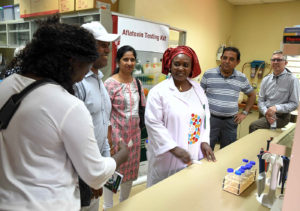 Visit to the aflatoxin testing lab.

In Mali, the Board members and the Management Group met the scientific staff at ICRISAT’s research station in Samanko and interacted with partners and donors, including the EU delegation, the Ambassador of India, representatives from Institut d’Economie Rurale (national research institute), Catholic Relief Services, CARE Mali, and the CEO of Faso Kaba seed company (an Africa Food Prize winner). During dinner, Dr Peter Carberry, Director General, ICRISAT, emphasized the prominent role of the private seed sector in strengthening seed systems and agricultural value chains. 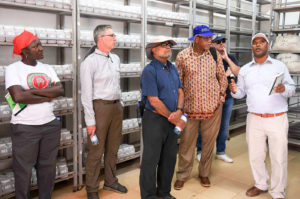 Visit to the ICRISAT-Mali conservation room. Photos: A Diama, ICRISAT

Market demand being the primary driver for ICRISAT’s Inclusive Market-Oriented Development (IMOD) strategy in West and Central Africa (WCA), it is critical to create incentives and opportunities for the poor to move away from poverty through market-oriented production and value addition. The ICRISAT WCA regional hub in Mali is now at the forefront of implementing a regional research-for-development (R4D) strategy to address constraints of low productivity of groundnut, of sorghum- and millet-based cropping systems; to improve soil, water and fertility management; to link farmers to markets; and to improve crop diversification. A major focus of this strategy is to boost agricultural R4D activities in WCA through strong resource mobilization initiatives and capacity building for the NARS in terms of both human resources and infrastructure. 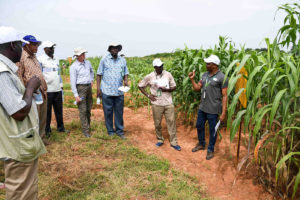 In Mali, considerable progress has been made in developing dual-purpose sorghum varieties (both for human consumption and livestock feeding), opening a new window of opportunities for farmers and their organizations. About 10 dual-/multi-purpose sorghum varieties are now available for use in Mali, Burkina Faso, Niger, Ghana, Senegal and Togo, including the most popular Soubatimi (with over 100 ha of certified seed produced in 2018 in Mali). The grain and fodder yields of such varieties can reach up to 1.8-2.5 t/ha and 10-15 t/ha, respectively (under 600–1200 mm rain).

A total of 40 commercial hybrids were developed (only five existed in 2013) and are being tested in regional trials. The research is also focusing on the aspect of nutrition to elevate levels of iron (Fe) and zinc (Zn) in varieties/hybrids, along with a gender perspective, involving culinary tests of improved varieties, including women for processing ability and both men and women for food quality.

ICRISAT’s focus on integrated management of aflatoxin was discussed. During a visit to the pathology laboratory, the Board members observed equipment used to test aflatoxin levels, as well as pre- and post-management strategies developed on farm to reduce contamination. The laboratory provides services to partners (farmer organizations, the private sector, national bodies and international organizations). To enhance the capabilities of the laboratory, new equipment has been bought and its manager given additional training.

With over two-thirds of its population under the age of 25, Niger has the youngest population in the world. Here, substantial work has been done by ICRISAT and partners to increase millet productivity and to improve the bioavailability of iron and zinc in millet varieties currently preferred by farmers here. ICRISAT’s research in pearl millet is leading the advancement of this crop in Niger. Recent progress includes the development of millet hybrid, biofortification and more. https://www. icrisat.org/africas-first-biofortified-pearl-millet-varietyaims- to-combat-anaemia/ 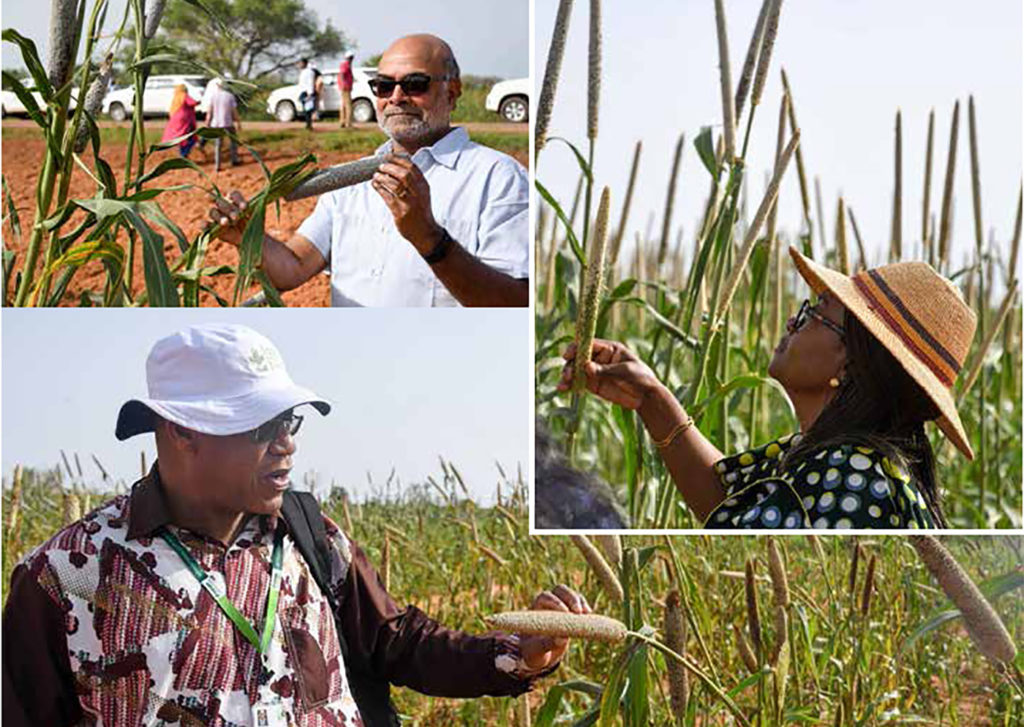 At the demonstration trials (pearl millet hybrids, OPVs, sorghum and cowpea intercropping) near Youri village, Sadoré, the visitors paid keen attention to the biological control of the Fall Armyworm (FAW), and the development of pest- and Striga-resistant as well drought-tolerant pearl millet varieties. 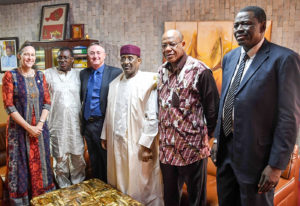 Meeting with key Ministers in Niger Minister of Agriculture: Thanking Mr Albadé Abouba, Minister of State for Agriculture and Livestock, for support in organizing the Niger Millet festival in February 2019, the Board described the next steps for sustainability of the initiative. Dr Peter Carberry talked about ongoing efforts and sought support from the Government of Niger in getting the UN Assembly to declare 2023 as the International Year of Millets.

Opportunities for South-South collaboration, including an upcoming India-Africa summit for agriculture, were discussed. 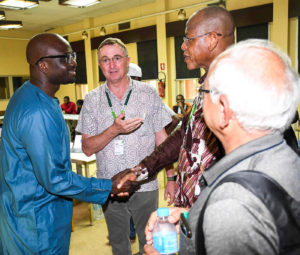 Mr Ibrahima Guimba-Saïdou, Minister – Special Advisor to the President of the Republic of Niger with Drs Sereme and Carberry. Also seen in the picture is Mr Murli Sharma. Photo: A Diama, ICRISAT

Asking the ICRISAT Board members to “be our ambassadors”, Mr Guimba-Saïdou elaborated that the innovation and technology city will be developed around clusters (agribusiness, health, education and more) and will host an acceleration and incubation center for startups and small-and-medium enterprises, a training and certification center, a coding academy, a business center, a national data center and assembly lines for digital and other equipment including computers, tablets and solar panels. Board members met with initiators of projects such as the coding academy.

Much of Senegal lies within the drought-prone Sahel, plagued with irregular rainfall and degraded soil. Approximately 75% of Senegal’s workforce relies on rainfed agriculture. The two main agricultural activities are crop production (groundnut, cotton, millet, sorghum, etc.) and livestock. Groundnut and cotton are the two most important sources of foreign exchange. Senegal’s economy is basically rural with limited natural resources, which means it is vulnerable to climatic variations and also to the volatilities in the international markets to which it exports groundnut, fish and phosphates. 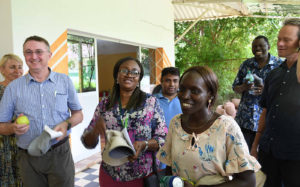 ICRISAT works closely with Senegalese agricultural research and development institutions such as ISRA and CERAAS to improve the resilience and food and nutritional security of dryland farming families.

Groundnut has been the main agricultural commodity to be exported from the ‘Peanut Basin’ of Senegal for years. Global competition and the need for compliance with international standards, as well as unsustainable farming practices have weakened the status of groundnut farmers; yet this legume crop remains key
for the food security and livelihoods of many Senegalese families.

For years, ICRISAT has been engaged in developing and disseminating improved varieties to enhance low yields. One promising solution has been the incorporation of resistance traits of foliar disease (rust, rosette, early leaf spot and late leaf spot) from wild groundnut relatives into popular local varieties such as Fleur 11.

Over 1 million ha, more than 10% of agricultural land, were planted with millets – especially pearl millet and sorghum, staple cereals in Senegal – in 2010. Although these cereals are quite resilient to dry conditions and low-phosphorus sandy soils, they have significant genetic variation. Pearl millet breeders are working on cultivars better adapted to drought, such as short-duration millets or with better tilling ability. Better crop cultivation practices such as integrated Striga management and soil fertility management are helping increase sorghum and millet production. 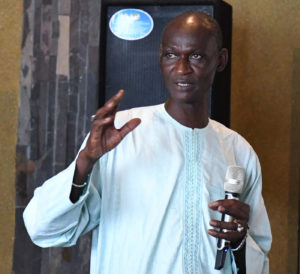 Poor access to improved seeds of key dryland cereals and legumes is a major constraint for Senegalese small farmers, explaining the low average yields (less than 800 kg/ha for millets in 2012). Efforts are on to improve the structure of the West Africa seed sector, to build fruitful partnerships and improve seed policies. Research and farmers’ organizations have been trained in certified seed production and variety testing.

Gender inequality is significant in Senegal (ranked 114 out of 146, source OCDE). Early marriage, skewed inheritance, and limited access to assets and incomes make women particularly vulnerable. Agricultural research tries to understand the constraints and possible drivers of change. For instance, women are more vulnerable to climate risks like shorter rainy seasons due to the traditional Senegalese custom that men first plant for themselves right after the first rains in early June, then they plant for their wives about a month later.

Along with annual climate variability, ICRISAT is also investigating the impact of climate change on small farmers. Under the AgMIP program, crop modeling and local climate projections have helped design climate advisory services for farmers in Kaffrine and Nioro regions. In the coming years, strategic partnerships with Senegalese research institutions will continue under CGIAR Research Programs.

The Board approved a new Policy on ‘Prevention of Discrimination and Harassment, including Sexual Harassment’ as well as minor edits to the Conflict of Interest policy. 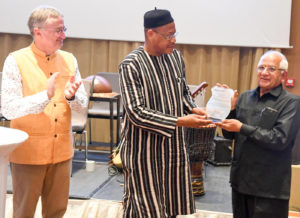 The Board honored Mr Murli Sharma, Head of Visitor Services and Protocol at ICRISAT headquarters for his 42 years of service to the organization. ICRISAT receives about 14,000 visitors per year at the headquarters in Patancheru, India, and Mr Murli has been the face of ICRISAT for them since a long time, enlightening them with the ethos and history of our organization.

The annual ICRISAT General Board Meetings were held during 11-14 September at Dakar, Senegal. 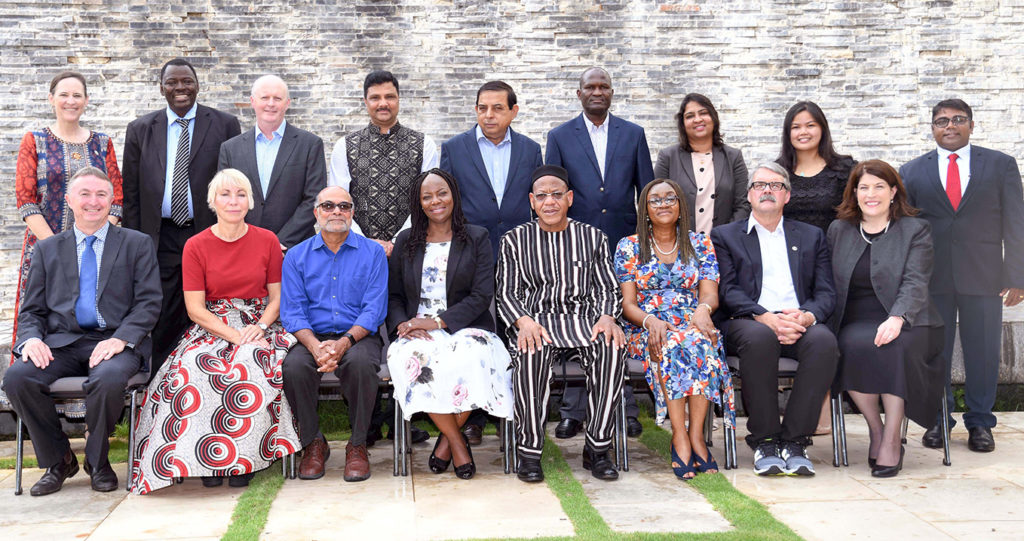 Board members with Management Group members. Photo: A Diama, ICRISAT