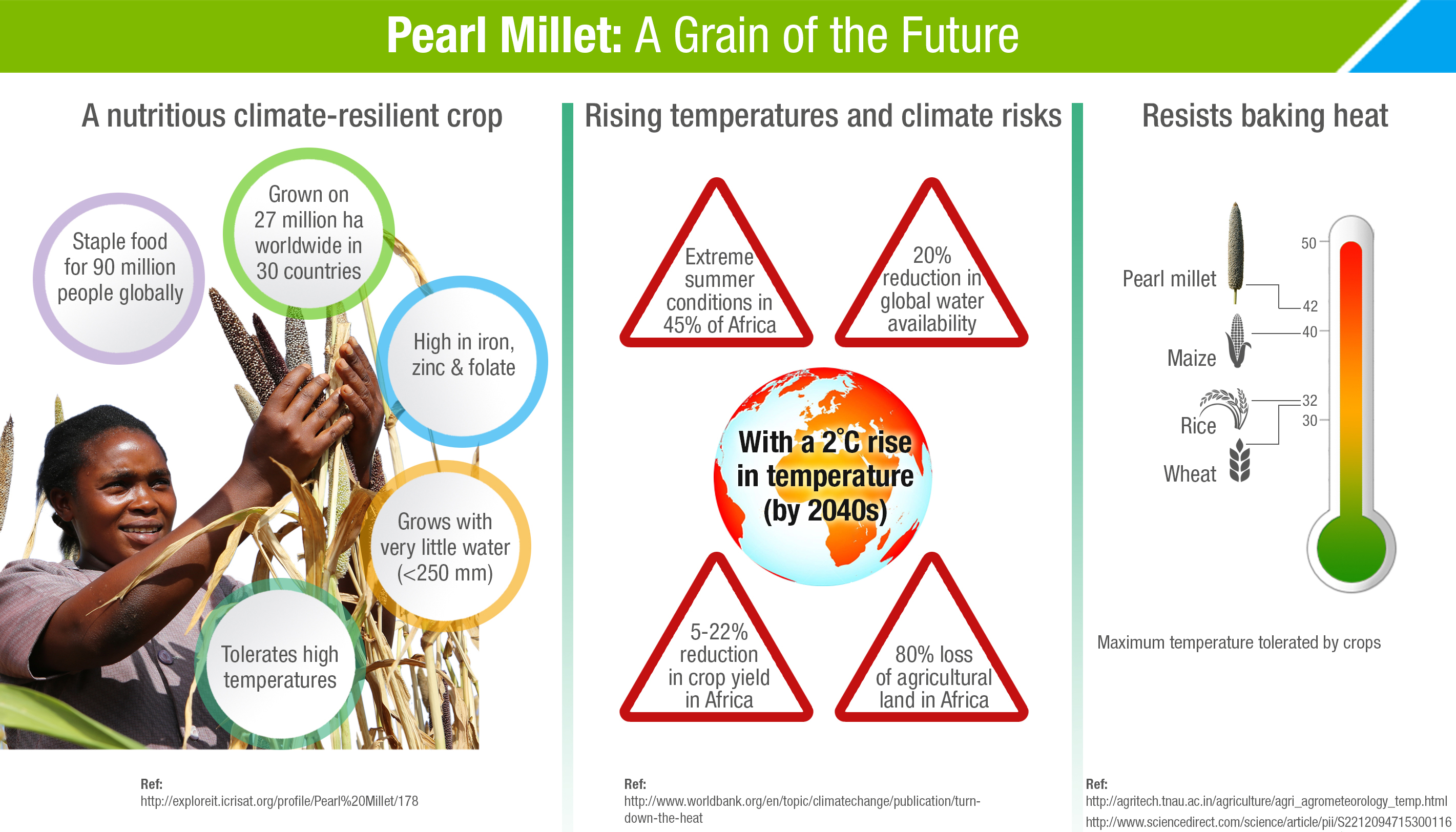 Agriculture and climate experts have warned for some years now that rising temperatures and frequency of extreme climate events including heat waves experienced in many parts of the world will lead to a drop in major staple foods like maize and wheat.

One cereal stands out in this looming climate chaos: pearl millet. Now, the decoding and sequencing of the pearl millet genome by a global team of 65 scientists from 30 research institutions has revealed critical coping strategies.

The analysis of genetic variability among a thousand pearl millet lines has led to a better understanding of the ability of this dryland cereal to survive soaring temperatures (over 42 degrees Celsius) and its exceptional drought tolerance. This discovery, published in Nature Biotechnology on Sept 18, 2017, may also help develop climate adaptation strategies in other important cereal crops.

Pearl millet, a staple in the Sahel and semi-arid India, has the extraordinary capacity to resist baking heat. While most cereals like rice or maize cannot support temperatures over 30 to a maximum of 35 degrees Celsius when they start forming their grain, pearl millet will fill its grain in temperatures of up to 42 degrees Celsius.

Dr Rajeev Varshney, Research Program Director – Genetic Gains, ICRISAT, who coordinated the Pearl Millet Genome Sequencing Consortium explains, “We have found that compared to other cereals like wheat, rice or maize, pearl millet has a more diverse repertoire of genes for natural wax proteins, which act as thermal protection for the plant.”

With recent advances in big data and statistical genetics, this research will catalyze breeding efforts to improve this crucial staple food for the food security and resilience of millions of people in arid and semi-arid Africa and Asia in particular.

Reliance on this climate resilient cereal by dryland populations goes back centuries. Archaeologists have even found that despite recurrent droughts, millet-eating farmers between the 11th and 15th centuries in Ghana did not starve as their popular staple was pearl millet.

Pearl millet is a nutritious dryland cereal, rich in protein, fibre and essential micronutrients like iron, zinc and folate. Nutrition studies have shown it has the potential to fight iron deficiency, the most widespread micronutrient deficiency and major cause of anemia, affecting the health and development of a third of the global population.

Pearl millet is grown on about 27 million hectares worldwide and is a daily food for more than 90 million people, among the most vulnerable in arid and semi-arid Africa and Asia. It is also an important source of fodder for millions of farms.

However, the plant’s yields have remained low over the last six decades, as this cereal is mainly grown in poor soil conditions without irrigation, minimal and no fertilizer and other agricultural inputs.

Investment in genetic research for this so-called “orphan” crop has been inadequate despite being the main food and feed for many farmers. As a result, breeders had limited genetic information to develop high-yielding superior varieties and hybrids that respond to farmers’ constraints.

This new pearl millet genome research enables a better understanding of its genetic variability, and researchers have already identified candidate genes of very important traits, such as resistance to downy mildew, a very damaging millet disease, and heat tolerance. Such crop heat resistance will be crucial for farmers in many parts of the world as climate experts forecast further heat waves in years to come. With new biotechnology methods, we could foresee the transfer of these heat and drought tolerance traits to other important food cereals in the near future.

Professor M S Swaminathan, father of the Indian Green Revolution, has been a strong advocate of nutritious pearl millet, which is now included in the food basket of the Indian public distribution system in some Indian states, including Karnataka.

Unlocking the DNA data of this climate smart nutri-cereal will generate new pearl millet varieties to push the drive for more productive, nutrition-sensitive and resilient farming.

This article was published in Thomson Reuters News Foundation.