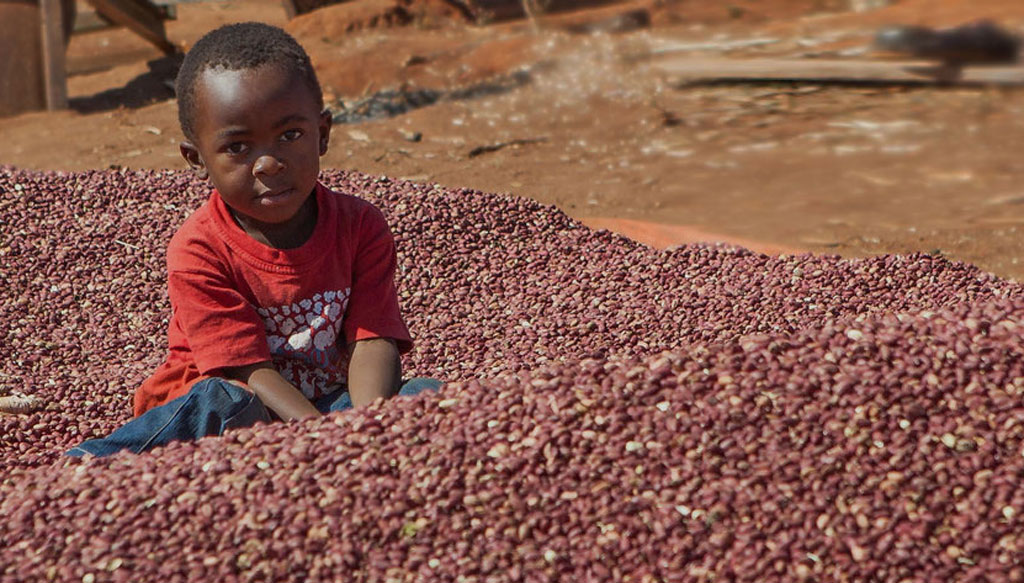 What you see may not be what you get: The case of peanut butter

Ever wondered what processes the mouth-watering peanut butter you scoop out of a bottle has gone through before landing on your plate? Who judged if the groundnut was safe to process into food products? Did it go through stringent quality control? Groundnuts are a popular snack and food ingredient in many parts of Africa. They are a rich source of proteins and important source of dietary fiber, fat, vitamin B6, calcium, iron and magnesium. But are we actually getting these proteins or are we ingesting toxins in the name of nutrition? Groundnuts may contain aflatoxins, a carcinogenic chemical compound that suppresses the body’s immunity to fight diseases, and has been found as a factor in child stunting (Barrett 2005; Williams et al., 2004).

Consumers in Zambia buy groundnuts as kernels, peanut butter, or milled powder – also called nsinjiro. While milling kernels into powder (nsinjiro), the visual quality attributes for judging the risks of aflatoxin contamination in the product are often lost. This may put consumers of milled powder at a higher risk of aflatoxin exposure.

Recently, results of a 3-year survey on peanut butter in Zambia (Njoroge et al. 2016) revealed aflatoxin contamination to be a common occurrence in peanut butter. A survey was conducted (2012-2014) to estimate and compare aflatoxin levels in groundnut kernels and milled powder. Around 202 samples (163 kernel and 39 milled powder samples) were purchased from markets in important groundnut growing districts and in urban areas in Zambia.

Results showed substantial aflatoxin B1 contamination levels in both, with the maximum aflatoxin B1 level of 11,100 μg/kg in groundnut kernels and 3000 μg/kg in milled groundnut powder. The European Union has set a regulatory limit of 4 μg/kg of total aflatoxins in products to be consumed by humans; in the USA this limit is 20 μg/kg. Results suggest that vendors do not systematically sort out whole groundnut kernels of visually poor quality for milling. Also causing great concern was the alarmingly high levels of contamination levels of groundnut products with aflatoxins in all years and locations!

Regulation and enforcement of standards are a challenge in many countries like Zambia, where there is a lack of skilled personnel, testing laboratories, and resources (Matumba et al., 2015). Tackling these issues can mean fewer people being at high risk of aflatoxin exposure and healthier people. After all, heaIth is wealth!

Watch a video on pre-harvest management of aflatoxins:

Approximately 5 billion people are under the threat of aflatoxin exposure every year around the globe! A staggering number for sure. It makes you wonder how safe the groundnut, maize, chillies and tree nuts that you eat are? Are we giving enough thought to food safety? Are our agricultural operations adequate and appropriate to produce safe crops? These are the questions to ponder over along the agricultural value chain and among the value chain actors.

Mycotoxin contamination, and in particular aflatoxin contamination caused by Aspergillus flavus group of fungi is a major food safety concern and is a critical  barrier to trade. The fungi upon colonizing crops such as groundnut, maize, chillies and tree nuts produces aflatoxins, which are secondary metabolites of the fungi and are highly carcinogenic in nature. Of the 20 aflatoxins known, aflatoxin B1 (AFB1) is the most potent and commonly found carcinogen affecting humans and animals. It causes liver cirrhosis, which eventually leads to hepatocellular carcinoma (HCC) the most common type of liver cancer. More worrisome is the evidence that aflatoxin exposure can lead to childhood stunting and malnutrition. Educating farmers on the benefits of following good agricultural practices in groundnut cultivation.

Is merely enforcing regulatory limits on the maximum allowance of aflatoxins in food and feed a solution? What is the best way to contain deadly toxins and ensure food safety? For starters, more than 100 countries in the world have established their own regulatory limits ranging from 4 µg/kg to 30 µg/kg to curb these toxins. Though research continues to identify prevention strategies, they are proving to be far from adequate.

So, is it possible to remove the toxin from food commodities? Once the toxin is formed, it may be very difficult to do so as it remains stable even at higher temperatures. Moreover, current techniques to treat/detoxify groundnut pods/lots are not easily adoptable by farmers. While ammonisation, ozonisation, and irradiation are effective methods, they may not be practically feasible at the farmer’s level, often leading to quality losses.

But this doesn’t mean we accept aflatoxin exposure through our diets. For instance, following good agricultural practices (GAPs) during pre- and post-harvest stages of groundnut cultivation can result in producing high quality groundnuts.

ICRISAT piloted a set of GAPs in farmers’ fields in Andhra Pradesh, India that succeeded in producing high quality groundnuts even under ambient conditions for pre-harvest aflatoxin contamination. Over 90% reduction in pre-harvest aflatoxin contamination was achieved without the additional burden of implementing GAPs as the increased yield (20% yield increase over non-GAPs fields) took care of the extra cost involved.

Imagine farmers obtaining a premium price for low aflatoxin/aflatoxin-free groundnuts (which is not the norm in India)! With proper market linkages, they are motivated to adopt technological interventions and move away from a business-as-usual approach to dealing with aflatoxin contamination. And what better way to address this qualitative problem than at the farm gate level. In fact, farmer incentives play an important role in technology adoption.

Now that in the long run certainly translates into safer food and consequently a healthier population!

Watch a video on the need to pay attention to aflatoxins in pulses:

For more information on aflatoxin view our Timeline
About the authors: