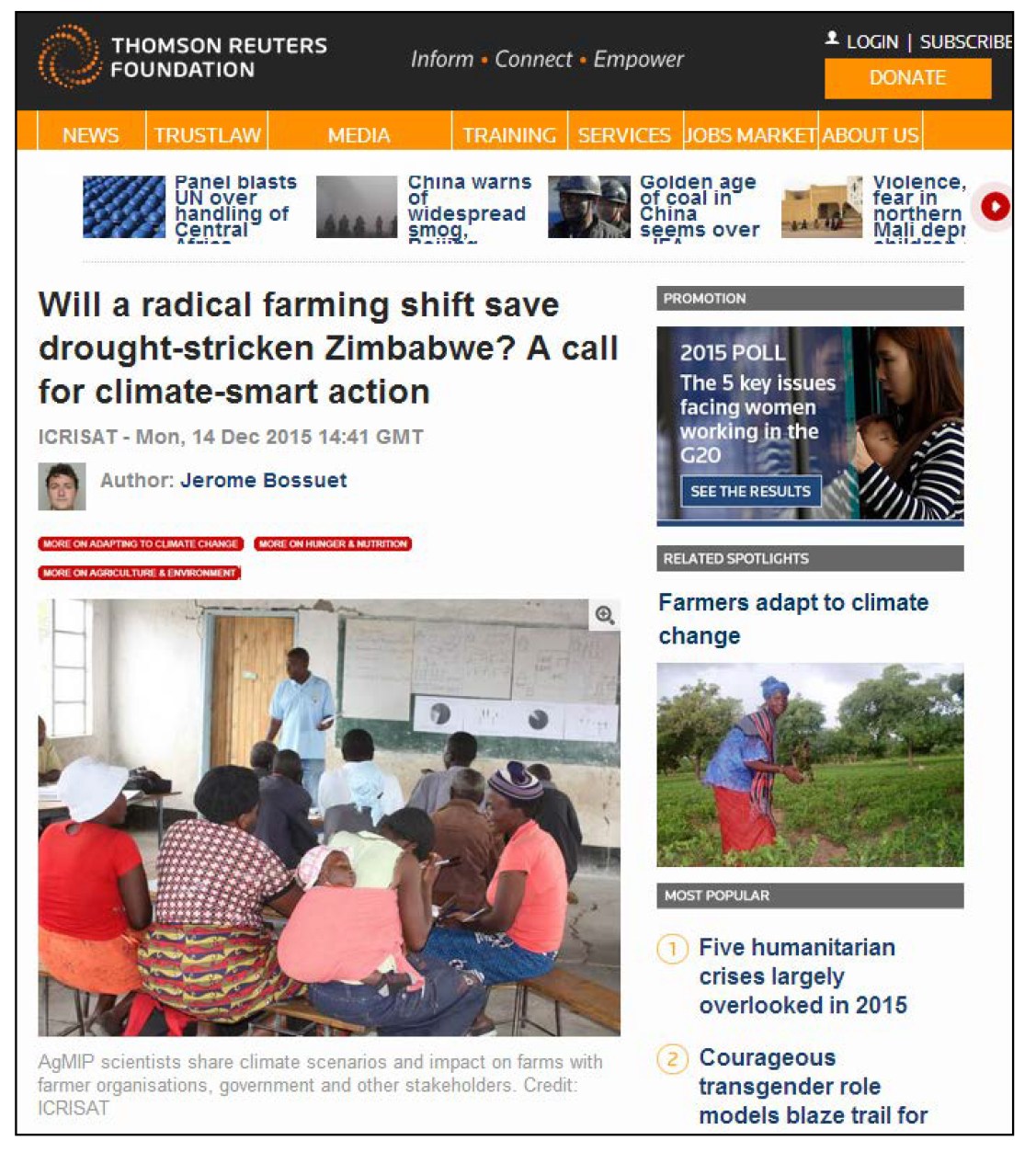 Will a radical farming shift save drought-stricken Zimbabwe? A call for climate-smart action

Zimbabwe’s slow recovery from years of economic depression has suffered a terrible blow from recurrent droughts halving the expected production of 742,000 tons of the main staple, maize, this year. It leaves 1.5 million Zimbabweans (16% of the population) without enough food to stay healthy, according to the UN World Food Programme. To make matters worse, because of the ongoing El Niño, meteorologists are predicting the upcoming cropping season to be further marred by below normal seasonal rains in the semi-arid southern region of Zimbabwe (FEWS). The Southern Africa Development Community has announced that over 27 million people across the Southern African region will face hunger over the next six months.

Over the last two weeks, political leaders debated how to address global warming during the COP21 talks in Paris. Yet for years many scientists have been warning us about the increase in drought risks around the world. This could lead to more frequent food crises and social unrest if no appropriate adaptation policies are in place. Agrarian countries like Zimbabwe, where over three quarters of the population depend on farming, many of which are poor rain fed smallholdings, will suffer the most.

Though clear that we are facing this enormous and complex threat, policy-makers often say they lack a consistent picture of what climate change will cost and how it will impact in terms of food security and the future of the farming sector.

This is where the Agricultural Model Intercomparison and Improvement Project (AgMIP) comes in. This international programme funded by UK aid, in partnership with the US Department of Agriculture, aims to better characterize and quantify the impacts of climate variability and change on the agricultural sector and food security, at global as well as regional scales. AgMIP allows more realistic and intercomparable projections, linking climate, crop and economic models, which ultimately help farmers cope with climate variability and change.

Letter to the Editor, Guardian, 15 December

We congratulate the leaders of our world on agreeing to limit the rise in global temperatures to 2C or, hopefully, 1.5C – a clear signal to transform our global economy to decrease emissions. We in the agricultural/scientific sectors have a key role in meeting this transformation by finding sustainable solutions to feeding the ever growing population, particularly in the dry tropics of Asia and Africa. For example, new drought-tolerant varieties of chickpea planted by Ethiopian farmers will lift 0.7 million people out of poverty and have a positive environmental impact.

In addition to climate change, these two continents are already facing the additional, but associated, problems of gender inequality, poverty, political instability etc. We need to redouble our efforts to leverage demand-driven innovation, partnerships and policies that ensure the poor can adapt to climate variability. The hard work starts now.