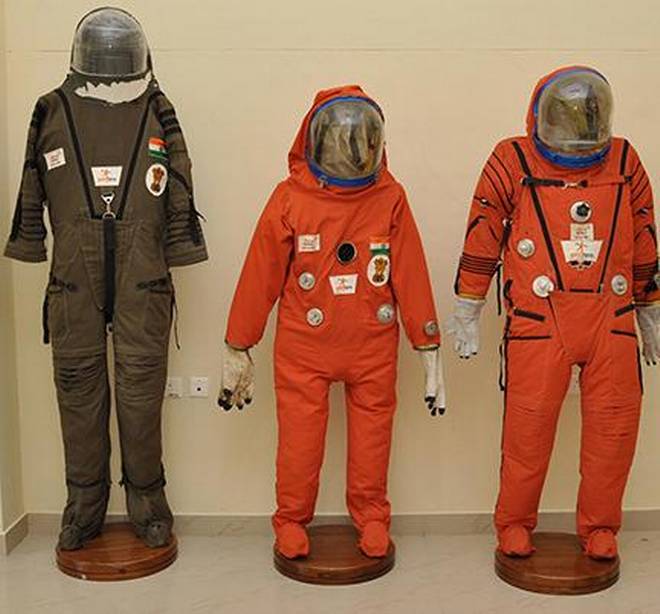 Space suits developed by the ISRO for the first Indian human mission.

We may not yet know who will eventually ride to space on the first Indian human mission in 2022, but some of the desi bites they may eat during those five days are already here, courtesy the Defence Food Research Laboratory (DFRL).

DFRL, Mysuru, the food research centre of the Defence Research and Development Organisation (DRDO), says it is geared to feed Indian astronauts with tasty ready-to-eats and easy-to-makes.

Its officials said they have also developed starch-based edible plates, cups and spoons that don’t add to the trash in space travel, or leave tell-tale traces of moving troops.

“We have all necessary technologies and products. We just need the government’s [specifications],” said DFRL Associate Director A.D. Semwal, during the first Army conference on ‘Empowering Field Army Through Food Technology’ here.

Space, he said, will be the lab’s new big challenge after helping soldiers of the Army, Navy and Air Force nutritionally conquer harsh, sub-zero, hot, hilly, undersea or flying conditions.

Last month, the Indian Space Research Organisation (ISRO) was tasked with sending out a Human Space Flight in the next four years.

Space foods — just as those meant for pilots, sailors or ground troops — should keep astronauts going physically and mentally over many days in alien conditions. They must keep hunger, depression, infections and fatigue at bay, and fortify astronauts with nourishment, high energy, alertness and immunity to diseases. Combating gravity-related disorientation and motion sickness while keeping bodily functions normal are other criteria, the official said.

Lieutenant General Vipan Gupta, Commandant Army Service Corps Centre and College, said that in harsh terrains and combat situations, soldiers’ foods should be their medicine. “We are trying to figure out what dietary supplements in terms of nutraceuticals, nano, functional and super foods [developed and in the market] can be added to the diet of soldiers,” he said.