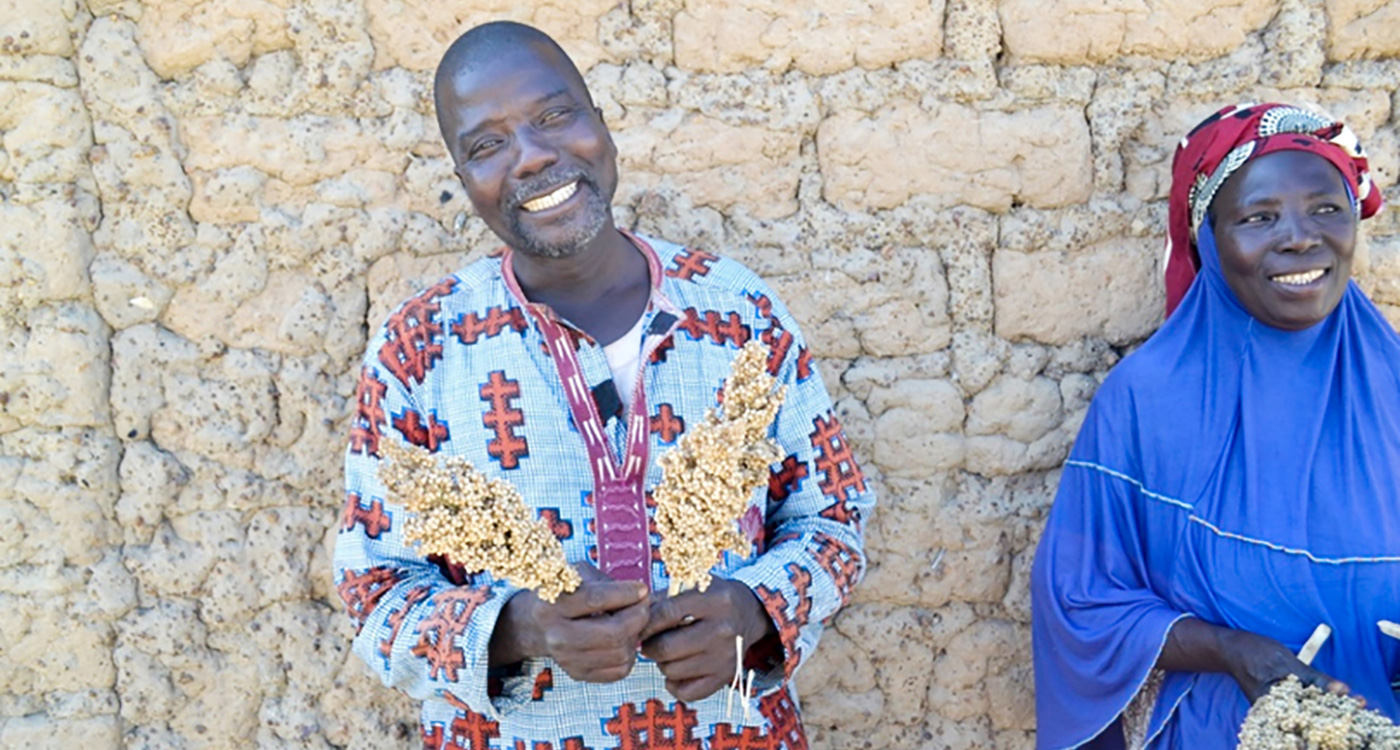 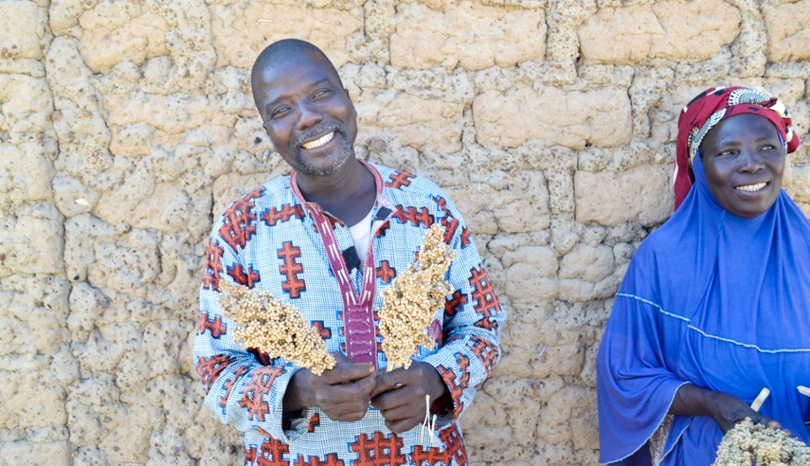 A farmers’ cooperative in Mali has experienced a significant increase in production of quality seeds, setting an example for other farmer organizations in Mali and neighboring countries. They are using both rainy season and dry season varieties to enhance their yields remarkably increasing resilience and farm incomes. On the occasion of the International Day of Cooperatives 2020 (4 July), we highlight how farmer cooperatives and organizations are enhancing access to quality seeds of drought-tolerant crops in Africa.

COPROSEM (Cooperative des Producteurs de Semences Maraicheres du Mali) from Mali is encouraging farmers to grow drought-tolerant crops suited to local environments, which is a key way to boost their resilience. The potential contribution of improved seed varieties to mitigate climate change impacts is well demonstrated by COPROSEM, which is being emulated by other farmer cooperatives and organizations in and around Mali. COPROSEM was founded by farmers who participated in testing research-bred varieties and wanted to produce new seed.

Mr Tenemakan Konate, marketing and sales manager of COPROSEM, says that the cooperative has diversified its cropping activities. In addition to cereal production in the rainy season, members are involved in dry season production and gardening. “Our focus has been on producing quality seeds, including early-maturing and drought-tolerant sorghum varieties most suited for our agro-ecology. This has facilitated access to improved seeds and provided the community with a range of very productive varieties,” he says. “Sale of these seeds have enabled many to buy agricultural equipment and inputs, to build houses, and more importantly, to achieve food security and self-sufficiency.”

On the International Day of Cooperatives, I would like to make a call for a greater support to farmer cooperatives because working collectively is more impactful. As the saying goes: If you want to go fast, go alone, but if you want to go far, go together. – Mr Tenemakan Konate, COPROSEM

From development of varieties to their adoption, ICRISAT works intensively with smallholder farmers and cooperatives to develop solutions adapted to overcome adverse climatic and agricultural conditions. Mr Balla Berthe previously only grew cotton but now is in favor of climate-smart sorghum which is better suited to drought conditions and unstable rainfall. When asked about the learnings from farmer fields schools and the participatory varietal selection (PVS) process, he says, “Knowledge of, and attention to knowing the origin and purity of seed, and thus being able to bring in more diversity of seed varieties was good learning.”

Mr Namakan Keita, a farmer from Kéniéro, says that as a member of a cooperative, he belongs to a knowledge-sharing community where he has learnt many things about crop management options and improved seed varieties (Soumalemba, Grinkan, Soumba and Lata).

“PVS trials are regularly organized for farmers in various agro-ecological zones to select the best varieties of sorghum resistant to climate change and drought,” says Mr Denis Yameogo, President of the Departmental Union of Cereals Producers (UDPC), who have adopted Jakunbe, an early-maturing and drought-tolerant sorghum variety. (In Bambara language, spoken in many West African countries, Jakunbe means the variety that is resistant to drought).

With improved seeds and techniques of production and management of soil fertilization, my sorghum yield on half a hectare in previous years has doubled. - Mr Oumou Keita, Guena village 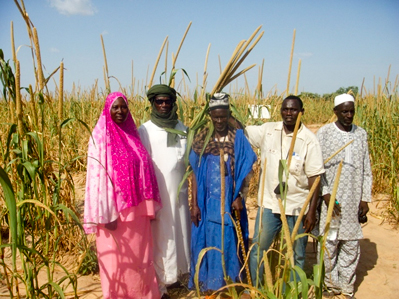 In Niger, the Made Bane Farmers’ Union of Falwell has improved access to quality seeds, created inputs shops and grain banks to prevent food insecurity and crises in villages. The Union’s members were selected and trained to participate in testing and demonstration trials of improved varieties of millet adapted to Falwell conditions. After successful tests, some members of the Union were accredited as Certified Seed Producers, and can now supply to other unions.

In Nigeria, Mrs Hadja Talatu Idrissa of Bunkure, near Kano, Nigeria, is the leader of a 25-women group in groundnut production and processing. In 2017, the Bunkure women’s group produced about 3.5 tons of groundnut. As grain was used primarily for family consumption, the group sold groundnut haulms and used the money to start dry season groundnut production in 2018. “We don’t sell our grain produce. We keep it and process part of it into oil and many sub-products, which we sell,” says Mrs Idrissa.

In Kulkpanga, Northern Ghana, Mr Iddrisu Dokurugu is the chairman of a multi-stakeholder platform. ‘Earlier, we had zero knowledge about and no access to improved varieties. We knew and used only the recycled seed of one local variety,” he says. “The yield has increased from 40 kg to 0.1 ton on 1 hectare since using improved seed.”

Increased productivity and crop performance cannot be attributed solely to dissemination of improved seed varieties. Farmer cooperatives have also been trained on organizational management. After several such trainings, a group of farmers in Kolokani, Mali, took the initiative to organize themselves in a cooperative called Yeleton. They then accessed financing from banks and support of the government, to obtain a tractor to cultivate their collective farms as well as individual farms of the cooperative members. This has contributed to their resilience.

“I’ve opted for dual-purpose, drought-tolerant, early-maturing and high-yielding sorghum varieties. These varieties are profitable for both human consumption and livestock feeding. I particularly like to cultivate the Pablo variety which is more resistant in low/irregular rainfall conditions. It is productive and has a much better yield of up to 2 to 3.5 tons per hectare against only 400 to 500 kg,” says Mr Mamoutou Diakité, village of Darabougou, Sikasso, Mali.

“The cultivation of millet and sorghum is more profitable because they require less fertilizer compared to the production of maize. Before, I did not produce millet or sorghum. Now, my wife and I have a 5-hectare plot entirely devoted to the production of sorghum,” concludes Mr Fousseyni Mariko, President of farmers’ cooperative Djiguifa.

Read more about ICRISAT work in Mali, Nigeria, Niger and Ghana on EXPLOREit.
Click here to see how ICRISAT can help in the COVID-19 environment in the short, medium and long term.