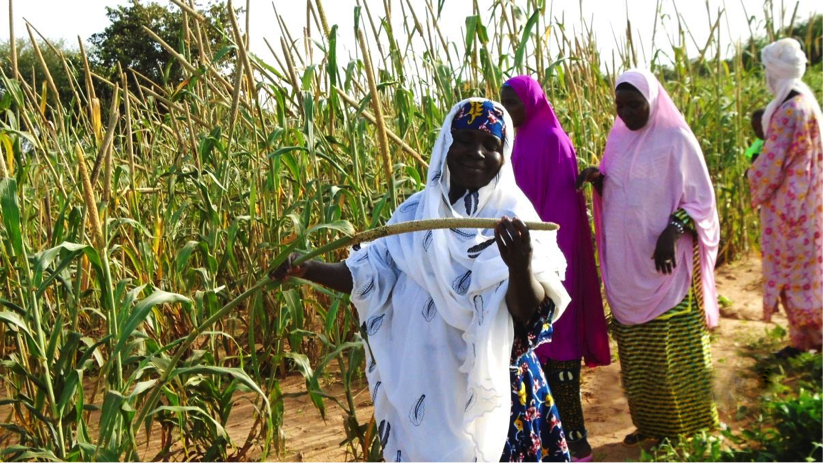 Open pollinated improved varieties of pearl millet, sorghum and cowpea were demonstrated to farmers in the Tillabéri region of Niger during the rainy season of 2016. These new varieties had improved grain yield and early maturity.

All improved varieties were compared to farmers’ local check with at least two objectives: (i) to introduce new varieties to young men and women farmers and expose them to the benefits of improved varieties over local land race varieties, and (ii) to identify preferences of female and male farmers on each crop variety.

Performance of the demonstrated high yielding varieties was welcomed by all farmers and participants from non-governmental organizations (NGOs) and National Agricultural Research System (NARS). Not only did the participants note the selected varieties of their choice but also requested improved seeds for the next rainy season. Discussions were held around the requirement of improved seed varieties by each village and on how to produce adequate quantity of varieties.

Farmers were trained on biological control of the millet head miner moth, a common pest found in West Africa that infests millet crops during flowering phase resulting in yield losses. Farmers were supplied with parasitoid wasp bags to protect their crops.

Farmer fairs were organized in each demonstration village from 28 September to 7 October. The fairs focused on the potential of each improved variety and provided an opportunity for farmers to tour through demonstration sites and rate the varieties of their preference. These ratings were shared with NARS partners, village heads, project partners and NGOs. The next step would be to establish seeds sale points in the villages for farmer preferred varieties for the 2017 cropping season.

A total of 1,500 participants (500 women and 1,000 men) attended the field visit. The demonstrations and farmer fairs were part of the McKnight Foundation supported ‘Niger Seed Systems Project for Pearl Milletand Legumes’. These activities were conducted in collaboration with the Deutsche Gesellschaft für Internationale Zusammenarbeit (GIZ)-Niger ASAP (Appui à la Sécurité Alimentaire des Populations) project which is an initiative of the Niger-German cooperation to provide assistance to households affected by food insecurity.

For more information on our work in Niger

For more information about our work on Sorghum

For more information about our work on Pearl Millet