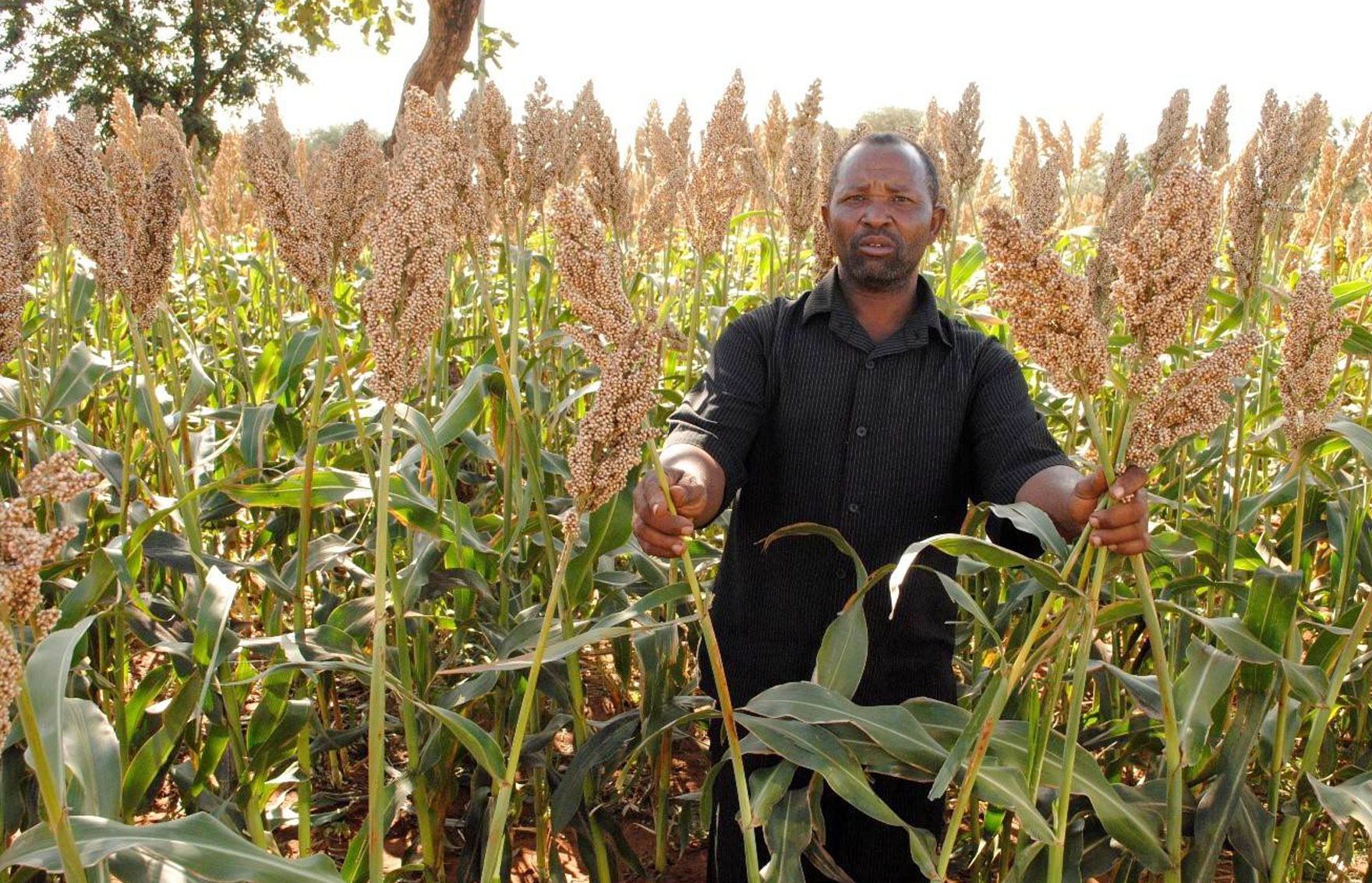 From subsistence to commercial sorghum farming

“I was struggling to provide a livelihood for my family. But now I harvest more sorghum and finger millet for food and sell the excess to the market. From the sales proceeds, I get enough money to pay school fees for my two children. I have also built a modern house, bought a motorcycle, 12 cattle (among them 8 bulls) and started poultry keeping from the money I gained from selling sorghum and finger millet grain and value-added products (cakes and mandazi).” Juliana Gunzu.

Juliana Gunzu is one of 40,000 farmers who have benefited from the introduction of improved sorghum varieties and training on how to manage the crop in the field, how to handle the crop during and after harvesting and on agribusiness. Juliana comes from Iramba district in central Tanzania, which experiences low rainfall and short rainy seasons that are often erratic, with widespread drought in one year out of four.

5 years ago, Juliana was a poor farmer who produced very little from her farm. Today, she is what they call a QDS (Quality Declared Seed) farmer. Quality declared seed is a class of seeds which are produced by farmers at farmer/village level while following government rules and regulations and are sold in the community. She is also a lead farmer who offers extension services to other fellow farmers using the farmer field school approach.

She attributes her success to her involvement in the recently concluded IFAD project – Sorghum for Multiple Uses (SMU).

SMU began its operations in January 2011 and has just concluded in September 2017. The project has been very effective in improving food and nutritional security and incomes of the smallholder farmers in Kenya and Tanzania which were the countries of focus for this project.

Improved varieties of sorghum (Macia and Kari Mtama 1), finger millet (U15 and P224) and pearl millet (ICMV 221) were distributed to farmers through seed minipacks. These farmers were then trained on how to produce clean seed. In Kenya, the project used the informal seed delivery systems, while in Tanzania, they used QDS system to ensure supply of seed in the communities. This proved to be very successful. In 2016 and 2017, for example, farmers in Western Kenya produced 110 tons of sorghum and finger millet seed from the 28 tons of foundation seed multiplied at the research stations.

Aspects of collective marketing were introduced and very well embraced by the farmers. Over 150 marketing groups were formed and their members trained on grain production, post-harvest handling and agribusiness. Being part of marketing groups has helped to assure farmers of fair prices for their produce, on one hand and on the other, assuring buyers of high quality grain. Marketing groups tend to have stronger bargaining positions and have set up systems to maintain minimum quality requirements. This has been very fruitful particularly in Tharaka Nithi county in Kenya where over 1500 tons of sorghum worth Kshs. 54 Million ($540,000) was sold to the East Africa Malting Limited (EAML) in 2016.

Successes in this program has led to the birth of a new five-year program called SOMNI (Strengthening Sorghum and Millet Value Chains for Food, Nutritional and Income Security in Arid and Semi-Arid Lands of Kenya and Tanzania), which is designed to build on the successes of SMU.

Dr. Eric Manyasa, Sorghum Breeder at ICRISAT points out that SOMNI will build on successes of SMU and HOPE 1 which include, among others, the release of 11 sorghum varieties (6 Open Pollinated Varieties -OPVs and 5 hybrids) in Kenya and 2 sorghum OPVs in Tanzania. These varieties, he said, offer farmers a variety of choice based on what suits their agro-ecologies and end-use. SOMNI will be up and out scaling these technologies.

“It’s not enough to have nice varieties” says Dr. Michael Njuguna, Director Food and Nutritional Security Programmes, Africa Harvest. “Our focus in this project will be to deliver these varieties to the farmer”

SOMNI brings together a variety of partners including researchers, agriculture and nutrition extension personnel from the national programs, NGOs, private seed companies, food and feed products processors, among others.

“We and not I is a core message for this project. ICRISAT cannot work alone and partnerships of the NGOs, government agencies and the private sector are vital to reach our farmers in the arid areas”, said Dr. Esther Njuguna, an ICRISAT scientist specializing in gender integration.

The new project which covers Kenya and Tanzania seeks to improve the livelihoods of at least 30,000 resource constrained farmers and will have a special focus on the youth, women and the disadvantaged members of the farming communities.