Farmers learn from each other in Mali – ICRISAT
SCIENTIFIC INFORMATION BY:
Topics
Crops
Location
Systems
Resources 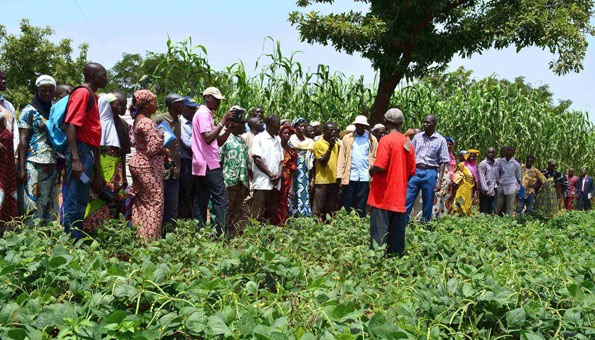 Peer-to-peer learning among farmers is helping spread new concepts and techniques of sorghum and millet production among farmers in Sikasso and Mopti regions of Mali. It is also facilitating farmers’ access to production systems of these commodities.

To facilitate cross-learning, a series of farmer exchange visits were held during a Farmer Field School (FFS) and involved not only the targeted producers but also producers from neighboring villages outside of the project facilitating these efforts.

Since 2014, four technologies have been shared and adopted in FFSs. These include:

Apron Star test: Apron Star is a seed treatment with fungicide-insecticide mixture for controlling downy mildew, damping-off diseases as well as for protection of seeds and seedlings against early season insect pests and soil-borne diseases. It has raised the production of millet and sorghum by up to 30% in Mali. Mr Debo Sanogo, producer and trainer at Kassanso, Sikasso region, had an interesting observation: “I made two plots: one with Apron Star and the second without Apron Star. I quickly noticed the difference between the two plots: almost all sown seeds have sprouted in the plot with Apron Star unlike the plot that has not received any dose. The difference was visible also in terms of growth, the vigor of the plants and yield. I am very happy with this product that has no adverse effect on the environment. I strongly appeal to all producers to adopt Apron Star that is easy to use and at an insignificant cost.”

Varietal testing: In 2015, hybrids and improved varieties such as Fada, Sewa, Pablo and Grinkan Yeraiwolo were compared to local varieties in Sikasso and Toroniou in Mopti. After nearly two years of testing, farmers have accepted the improved varieties in view of the advantages linked to the use of hybrid seeds and improved production techniques.
Microdosing: This is a practice that encourages smallholder farmers to use small amounts of fertilizer at critical stages of crop growth to maximize yields. The overall input requirements With microdosing, 35 kg of fertilizer are sufficient to cover one hectare. This greatly increases the economic value of production,” said Mr Daniel Kamate, Catholic Relief Services (CRS) supervisor, Koutiala. Microdosing is now leading to large benefits in yields and incomes. However, this technique has high labor requirements.

FFS – a group-based learning process: FFS brings together concepts and methods from agroecology, experimental education and community development. During FFSs, farmers carry out experimental learning activities that help them understand new technologies and the ecology of their field.

The knowledge gained from FFS main plots, through ToT (Training of Trainers) will be replicated by participants (FFS Facilitators) in their own villages. A ToT is organized around 5 villages, each village providing 10 participants. These people organize in groups of five each, with each group forming a replication plot having technology similar to the main plot. Each group will reach out to between 25 and 30 participants who meet every two weeks for sharing information about different topics related to the production of millet/sorghum. The training on both levels (ToT and secondary plot) are season-long – from land preparation to harvest.

“If your crop just feeds you for a season, it’s time for you to change jobs,” said Mr Makono Kone, sub-sector chief of the National Directorate of Agriculture, Sikasso, to farmers in the municipality of Fama (Sikasso).

The exchange visits were held from 27 September to 4 October and were organized as part of the Africa RISING large-scale Diffusion of Technologies for Sorghum and Millet Systems in Mali (ARDT_SMS). The field days were organized by CRS (a project partner).