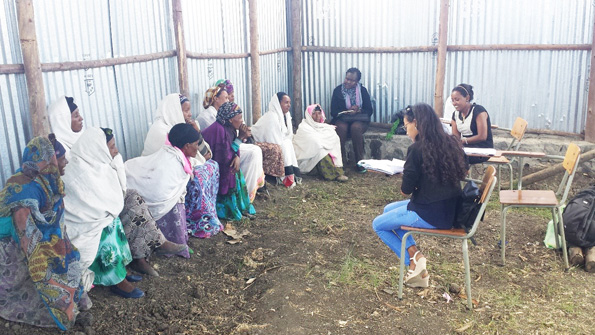 A qualitative study launched by ICRISAT’s Gender Research team to unravel the reasons behind the low turnout of women in agricultural training events in Ethiopia’s Shewa region brought to light important gender issues.

Chickpea farming is common in this region besides wheat, teff, barley and faba beans. In the Tropical Legumes III (TLIII) project, the team working on chickpea has a policy whereby every male farmer attending any training event has to be accompanied by his wife. Despite this, a training group of about 70 participants would have only 5-6 women. Women work in the chickpea fields but are not allowed to attend trainings.

ICRISAT, with the support of staff from the Ethiopian Institute of Agricultural Research (EIAR) in Debre-Zeit worked with a vignette based guide, to facilitate discussions that followed the life of a young Ethiopian couple, Gete and Getachew, through various life events; exploring their decision making processes, their negotiation processes and the reasons behind their decisions. The tool also explored the social and cultural rules at play between the couple, the society in which they live (represented by parents and relatives) as well as development agents (represented by agricultural officials and civil leaders).  Women and men participants had their discussions separately.

In one of the meetings, the women participants had been in discussion for about one hour when they started indicating with their hands that their hearts were pounding. Research Associate Millicent Liani, who didn’t understand the local language, was concerned what was happening to the participants. The women were already requesting to go back home. They were concerned that they may not be able to explain to their husbands where they were. They said that their husbands would ask: “Where have you been all this time?” Interestingly, the male participants opined that: “A good woman/wife should go to the market running and come back home very fast. She should not have other people’s numbers in her cell phone”.

We realized that ‘time away from home’ and the approval of their spouses was one of the key drivers in women’s decision to attend a training. Women expressed the need to participate in agricultural trainings, for they have specific roles they play in the production of chickpea. They would benefit from more information but are hampered by cultural norms. In this region women have a very restricted freedom of movement and women have to account for their ‘time away from home’. Culture has ingrained the enforcement of this rule into the definition of a ‘good wife/good woman’. Women are expected to operate in the ‘private space’ and hardly in the ‘public space’ unless accompanied by male relatives.

It is well documented that acquiring agricultural knowledge by women farmers in smallholder systems is a critical driver for improving agricultural production, closing gender gaps in agricultural productivity, with extended gains in enhancing household food security, nutrition security as well as income generation. These are important goals in the strategic results framework of the CGIAR as well as the Sustainable Development Goals of the United Nations. Women participation, is therefore an important ‘gender indicator’ to track, not only to understand the realities of the lives of women farmers but importantly to start exploring innovative approaches we can use to deliver information and understand how to integrate them into trainings for women in rural Ethiopia and other regions with similar cultural norms.

The study was conducted during November 2015.