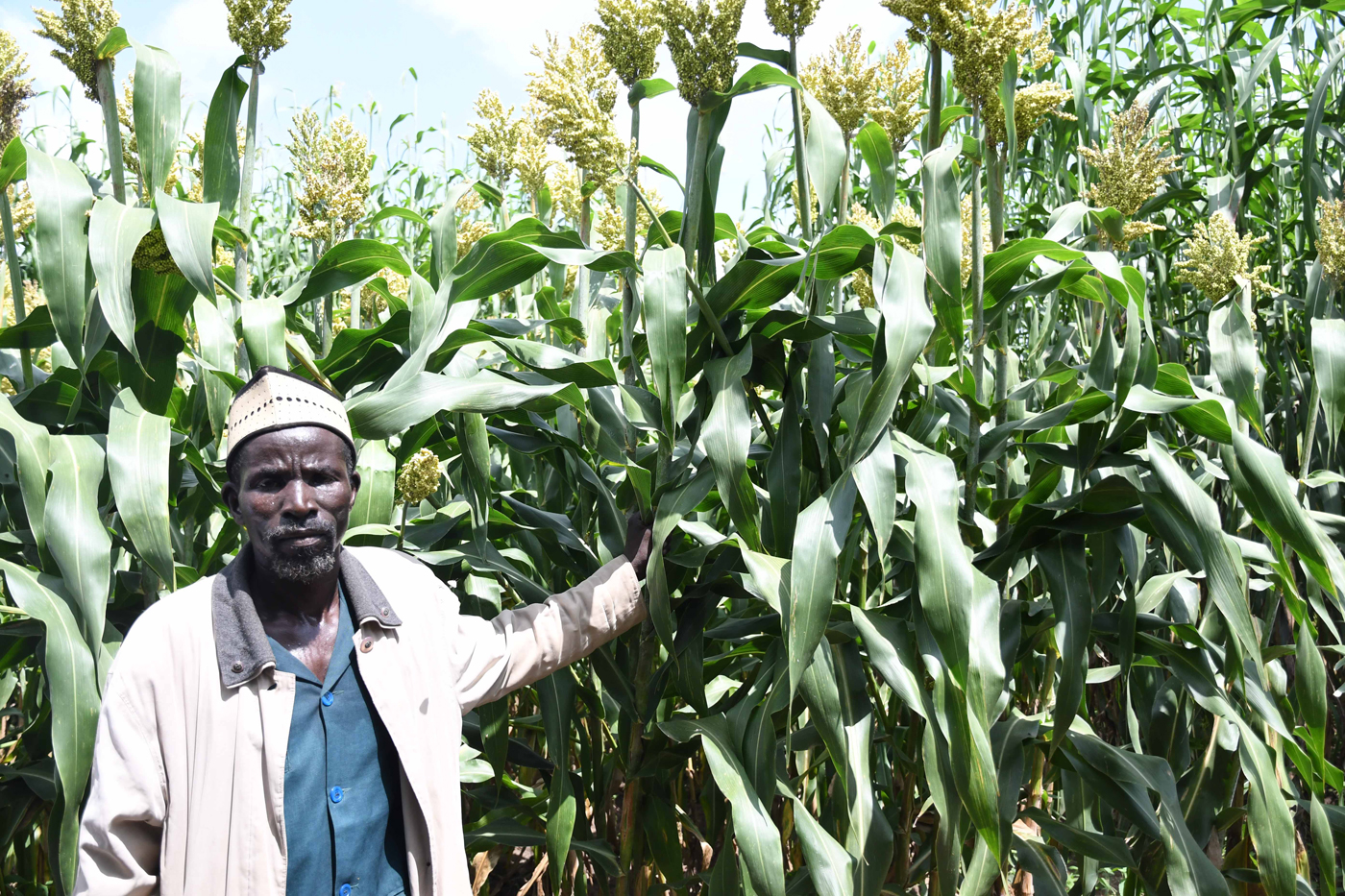 Drissa Diarra is impressed by the qualities of dual purpose sorghum at the Africa RISING Technology Park in Koutiala district. PC: A. Diama, ICRISAT

“I was among the first group of farmers trained on contour bunding as part of the Africa RISING technology park activities in Bougouni. This training has brought a significant change in my farming. When surrounding farms were hit by dry spells, my crops were still green,” says farmer Zie Samake.

Another farmer, Fousseyni Samake says, “To cope with climate variability and drought it is important to adapt by using improved varieties and appropriate crop management practices. I discovered that agriculture is still profitable when right technologies are applied. I feel confident to use these technologies in my own farm even after the completion of the project.”

Both Zie Samake and Fousseyni Samake are two of the 300 participants of farmer’s field visits organized in four technology parks of the Africa RISING project in southern Mali.

The field visits commenced on 3rd  October and focused on climate-smart land and water management technologies developed by ICRISAT and the Institut d’Economie Rurale (IER). Participants were exposed to different experimental trials such as: treatment of fertilizers (cow manure, poultry manure and mineral fertilizers) tested on three sorghum varieties (Fadda, Soumba and Tieble) and contour bunding technology applied to maize (Sotubaka) and sorghum (Pablo). The three sorghum varieties are being screened to determine iron and zinc content. According to ICRISAT scientist Dr Baloua Nebie, the level of iron and zinc is very high in improved varieties. Fadda especially has high levels of iron and zinc compared to the local check.

Several farmers were impressed by the joint vegetable trials initiated by The World Vegetable Center and the International Fertilizer Development Center. A dual purpose sorghum trial was introduced to visitors who understood and appreciated the possibility of doubling their advantage using specific sorghum varieties as a source of animal feed and human nutrition. Another attraction was the demonstration of chopping machines and silos for animal feed improvement by Dr Hamidou Nantoume, a scientist from IER. He explained the concept of silo, the conditioning of the straw and its stocking for later use.  During a follow up group discussion, farmers asked several questions about different cycles of improved hybrid and dual purpose sorghum varieties as well as the means by which they could make the most out of the demonstrated technologies.

Combining various improved agronomic practices on different crops were demonstrated and once again the dual purpose sorghum captivated the participants. Most farmers were keen on learning more about the advantages and disadvantages of using chemical fertilizers, improved sorghum varieties, soil, water and crop management practices. They raised several questions such as, how long does it take to have a fertilizer using the compost of cotton stalks and sorghum stalks? What are the benefits of the dual purpose sorghum?

The primary goal of such demonstrations is to increase farming productivity based on best performing varieties and fertility treatment. ICRISAT scientist Dr Florunzo Akinseye says, “We are demonstrating different agronomic technologies that we have found useful on station. From what we have seen in the field, there is a significant impact in the application of manure, diammonium phosphate and microdosing.”

“During this visit I saw many technologies. I like the dual purpose crop which requires little fertilizer and yields better compared to other crops such as maize. Finally, I know that sorghum is more nutritious and disease tolerant compared to maize,” adds farmer Drissa Diarra.

Korotoumou Doumbia, a woman farmer, impressed by the contour bunding technology says, “I have learned that contour bunding can contribute greatly to yield improvement. After using this technology in combination with improved sorghum varieties and with correct application of fertilizer, I have seen the evidence that it increases productivity!’ Participants enquiring about the best ways to efficiently utilize the demonstrated technologies. PC: A. Diama, ICRISAT

“When these varieties are sown on time, they are high yielding. Also, animals have shown a preference for dual purpose sorghum stems because they have low lignin and are sweeter. In 2016, I had my first experience of cultivating dual purpose sorghum. I reaped 25 bags of sorghum against 15 harvested on one hectare in previous years with local varieties. As they mature early, these crops are more resistant to drought compared to most local varieties,” says farmer Hassane Diallo from Massala, Bougouni district who is now planning to start a business of dual purpose sorghum seed.

Project: Africa RISING- Africa Research in Sustainable Intensification for the Next Generation

To know more about ICRISAT’s work on sorghum click here