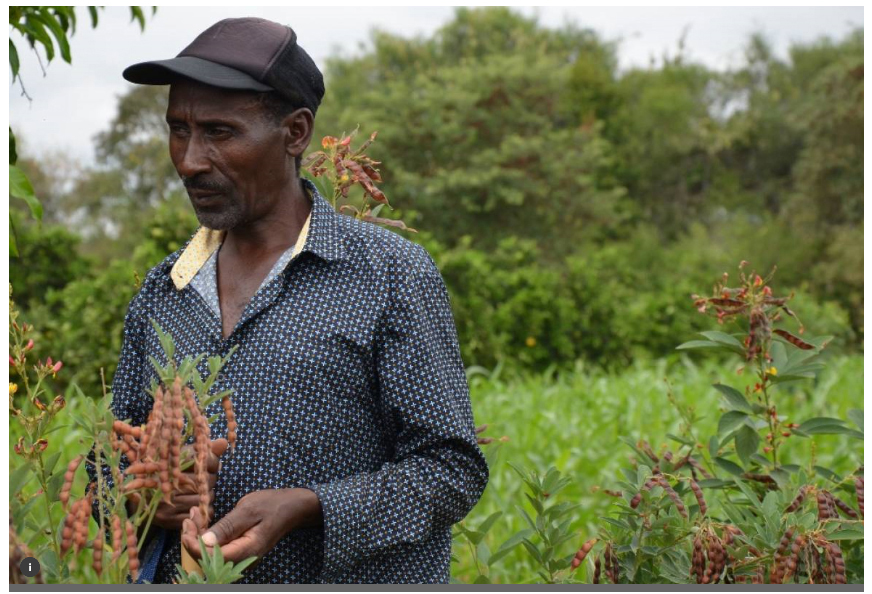 Samuel Nduvi in Kikumini, Kenya has been growing drought tolerant sorghum intercropped with protein-rich legumes like pigeonpea and cowpea over the last three years.

Farmland in Kenya’s north has deteriorated because of loss of soil nutrients and agro-biodiversity, putting livelihoods of 12 million people at risk

On this year’s international day to combat desertification, the United Nations urged for more investment in making land more productive to give “a future for farmers to stay resilient on their home ground”.

A few years ago, a study showed that preserving soil quality may significantly reduce migration in rural Kenya. However, as Kenya tackles yet another drought this year, triggering the collapse of maize national reserves and food inflation, things seem to be going the other way.

Farmland, especially in Kenya’s northern semi-arid regions, has deteriorated because of  soil erosion, and the loss of soil nutrients and agro-biodiversity, putting the livelihoods of more than 12 million people at risk for years to come.

For 35 years, Henrietta Moore, director of University College London’s Institute for Global Prosperity, has been closely studying the links between the agro environmental changes and the well-being of rural communities in Kenya. She has seen how the rapid spread of maize has affected the nutrition and resilience of farmers.

“When we talk about the drought, the big story in Kenya is that maize mono-cropping, encouraged by local policies and markets, has accelerated desertification, which has and will have a long-term impact on soil productivity,” she told me.

Moore explains that Marakwet, in the former Rift Valley province, was traditionally a sorghum and millet growing region, cereals that are more adapted to erratic rainfalls.

These communities have a history of sustainable farming practices like intercropping, but they have been under increasing pressure to focus more on cash crops in recent decades.

“Some farmers here have proved very resilient and continued to grow millets as it has ritual importance, making ugali (a type of porridge) during family gatherings for instance,” Moore said.

A call for more diverse and climate smart farms

The impact of repeatedly cultivating just maize weakens soil health. It tends to decrease soil’s ability to retain water and overall soil fertility due to continuous nutrient loss which is not redressed by appropriate fertilisation methods.

Similarly, in Burkina Faso, agronomists have demonstrated that combining affordable soil fertility practices like microdosing, intercropping millet and cowpea and the use of improved seed varieties can reap rewards and lower climate risks for farmers. However, scientists warn that farmers will only accept such climate smart practices if these match their preferences, in particular the market value of the crops.

Driving more diversity on farms, especially growing more locally adapted, drought-tolerant crops like sorghum, millet and pigeonpea does make a lot of sense for a sustainable future for farming in the weather-dependent Kenyan drylands. These crops also have much needed nutritional qualities such as calcium-rich finger millet which contain methionine, a crucial amino acid lacking in most African diets. But farmers will only grow more of these crops if they know there is a demand for them, from the markets but also within their households. Despite their agronomic and nutrition benefits, traditional crops like sorghum and millet have been sidelined for decades. Their demand and image suffered at the expense of the demand in Kenya for more globalised diets. There are fewer incentives for research on these climate smart crops, and farmers tend to invest less in them, cultivate them on more marginal plots which reinforce the particularly low yields.

This may change in the near future. Kenya’s county agriculture and health departments are working with farmers and community health workers in six regions through dynamic participatory cookery programmes.

Their aim is to help rediscover the benefits of millet, sorghum, cowpea and pigeonpea by sharing modern, healthy, time-saving recipes alongside sanitation and nutrition education. More than 40,000 families have already been reached and the impact of a varied diet on nutrition is being monitored.

The smart food campaign coordinated by ICRISAT is popularising smart foods like millets and pigeonpea, to promote under-utilised crops that are “good for you, good for the planet and good for the farmer”.

To bring back foods that are nutritious and sustainable, we need not only to boost their production but also increase demand for them among consumers. Processed products that may help boost their popularity include gluten-free millet drinks, high calcium millet crackers and puffs, sorghum flakes or salads – alongside the traditional porridge, grains and flour mixes.

We also need these foods to be affordable to scale up sustainable diets. Partnerships are vital to tackle nutrition inequalities in the food system as highlighted by Lawrence Haddad, executive director of Global Alliance for Improved Nutrition, at the EAT Stockholm Food Forum last week.

These partnerships could start locally. University College London’s Henrietta Moore says she believes the drive for smart food will take off in Kenya as part of the country’s climate mitigation strategy.

We need to invest more in indigenous knowledge-sharing approaches to scale up diversity on farm plots and plates.

(This article by Alina Paul-Bossuet, Head – Communications and Partnerships, ICRISAT, first appeared in the Thomson Reuters Foundation website on 20 June.)