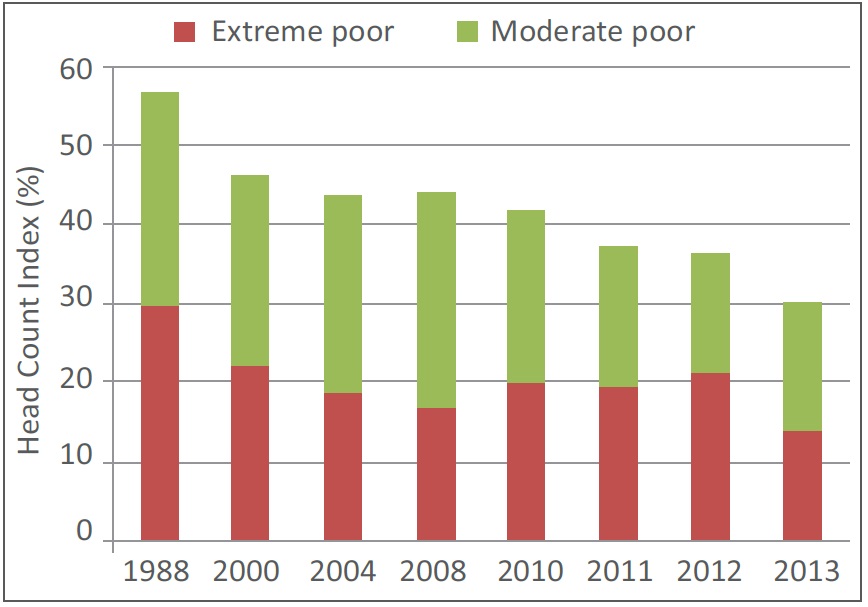 The first set of findings which covered 62 villages were included in a paper titled: Did the commodity price spike increase rural poverty in Bangladesh? This study found that prior to the global crisis in commodity markets in 2007-2008, Bangladesh had enjoyed two decades of relative success in reducing rural poverty.

From 1988 to 2004 the percentage of rural households below the poverty line fell from 62% to 44%, a reduction that was associated with a shift towards non-farm employment. However, the surge in commodity prices in 2007–2008 and the resultant higher prices in food staples such as rice increased the poverty incidence to 45% and pushed millions below the poverty line.

During the period 2004-2008 the per capita income continued to rise to a rate of nearly 15% per year with the average per capita income increasing from US$264 to US$417. Yet at the same time food prices rose dramatically with the poverty threshold growing at an average annual rate of 10%. This helps to explain the paradox where farm income increased yet at the same time higher food prices harmed the consumers and actually increased poverty levels.

Analysis of more recent VDSA data by ICRISAT which monitors 500 households in 12 villages across the country has shown a steady increase in per capita income since that period with income increasing from US$186 in 1988 to US$445 in 2013. There has been a marked increase in dependence on non-farm sector income along with a greater use of modern technologies and financial and capital infrastructure: the expansion of irrigation facilities, adoption of modern varieties, access to agricultural credit, improved market access through better roads and transport infrastructure and increased educational attainment.

“Basically the two studies show the same result that agricultural technologies and agricultural research have the power to reduce the poverty level,” says Dr Uttam Deb, Principal Scientist, Economics, RP-Markets, Institutions and Policies, ICRISAT. “While it is necessary to raise household incomes – the essential condition for reduction of poverty is to have a lower level of real prices in agricultural commodities. You will only be able to achieve that through introduction of improved agricultural technologies which will achieve a reduction in per unit cost of production.”

The paper ‘Did the commodity price spike increase rural poverty in Bangladesh?’ was recently awarded the ‘2014 Best Paper Award’ at the International Conference of Agricultural Economists in Milan, Italy.
References