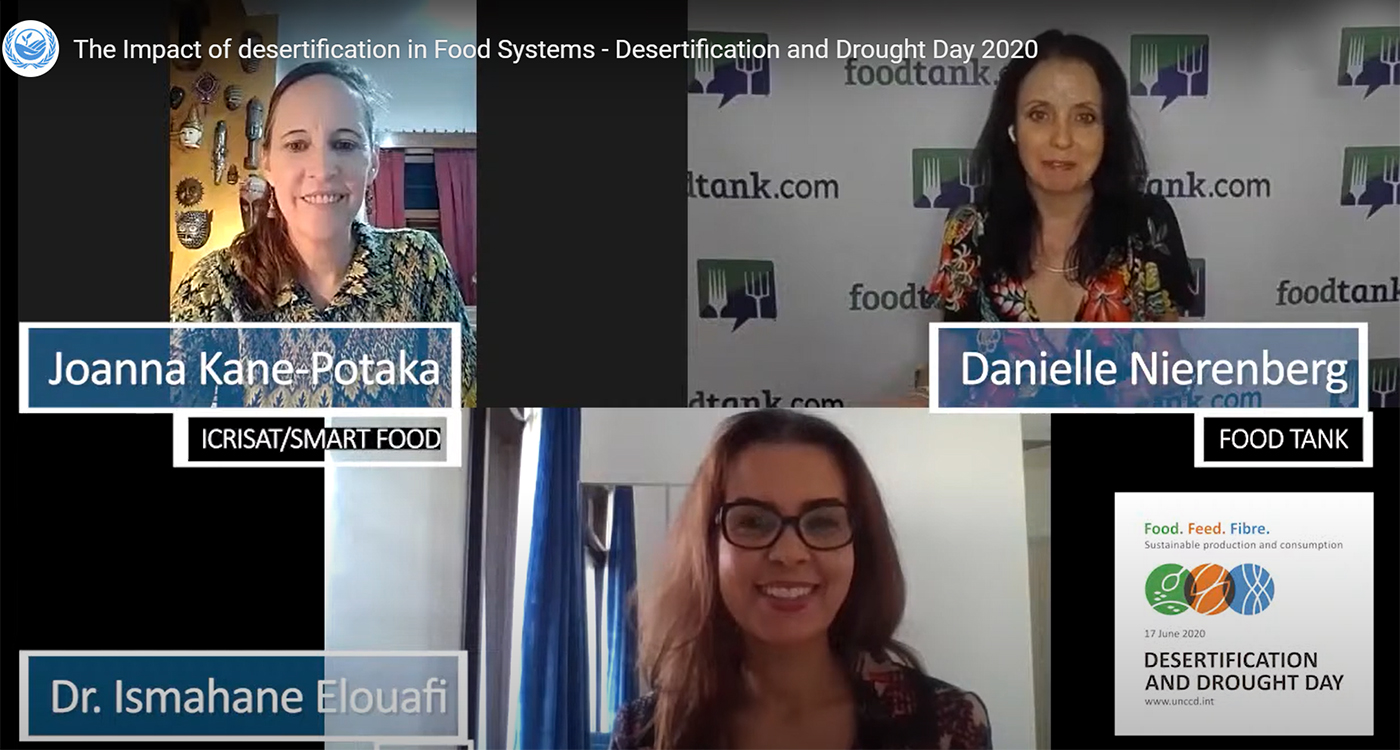 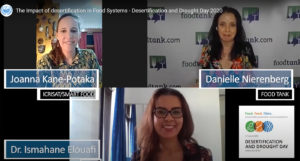 Scientists, policymakers, farmers and consumers all need to collaborate to mainstream nutritious and resilient crops that can be grown locally and help reduce desertification and land degradation. The need of the hour is to diversify farming systems and diets, and encourage production of locally adapted climate-resilient nutritious crops. Food system experts discussed ways to mitigate the impact of desertification on food systems at the UN Desertification and Drought Day virtual event.

Alternative foods can make the difference

Ms Joanna Kane-Potaka, Assistant Director General – External Relations, ICRISAT, described ICRISAT’s evolution into an organization looking at entire value chains – from soils to improved seeds to processing/agri-business and consumers – for its mandate crops. The Smart Food initiative, she said, is raising awareness and driving the demand from the consumer end for climate-smart and nutritious dryland crops.

Highlighting Smart Food’s ‘triple bottom line’: Good for you, good for the planet, good for the farmer, Ms Kane-Potaka explained that crops such as millets, sorghum and legumes were high in nutritive value, helped the environment by growing with less water and having a smaller carbon footprint, and were helpful to farmers as they could grow with minimal inputs under unfavorable conditions. She also mentioned agricultural food processors and agri-entrepreneurs as a critical part of changing consumer behavior through new and exciting foods.

Stating that under the existing food system, farmers were often the least benefited, Dr Elouafi recommended an approach that took all players – farmers, processors, retailers and consumers – under consideration so that the returns on investment from agriculture were well distributed among them.

Ms Kane-Potaka said that although different groups were working on solutions for malnutrition, environmental concerns, farmer wefare, they needed to work together in finding solutions that cut across all these areas of the food system. Smart Food, she said, connected all three groups by being nutritionally rich, environmentally beneficial and helpful to the farmer. However, all of these would not have an impact unless there was a demand from the consumer; hence, the need to work from the consumer end.

Dr Elouafi emphasized the urgency to use the various available technology today – IoT, Big Data, 5G, Omics – etc to achieve the UN SDGs by the 2030 deadline. “One of the best ways to use technology to our benefit today is to use them to develop the right foods adapted to the local ecosystem and develop food systems within the country. We have to optimize local food systems and distribution systems to make them efficient and cost effective,” she said.

Ms Kane-Potaka underlined the role of technology shortening the value chain between farmer and consumer. “The use of blockchain for enhancing traceability of food is also a big opportunity to popularize underutilized and traditional foods and showcase the journey of food from farm to plate,” she said. “We can also use tech to create a ‘virtual information experience’ at a supermarket or on-line to create an experiential visit for the consumer with edutainment about the nutritive qualities of the food, how its grown and processed etc. This can go a long way in building awareness about different crops and their benefits and drive demand.”

‘Storytelling’ is an effective way to influence policymakers towards decisions that promote crops that are nutritious and environmentally beneficial. By creating an exciting narrative highlighting the impact of helpful policies, policymakers can be encouraged to directly visualize their influence. Ms Kane-Potaka gave the example of ICRISAT proposing the idea of a National Millet Festival in Niger and how the festival helped in breaking down barriers between policymakers, farmers, processors, chefs and consumers. On the other hand,
Dr Elouafi felt that putting a numerical value to the benefits of a certain policy would also be key.

On the whole, as, it is clear that food systems had to undergo a major change if we are to meet the 2030 deadline of the United Nations Sustainable Development Goals. The panelists concluded that this was the right time to get innovative, involve the women and young population and optimize the use of technology to make a long-lasting change in the way the world produces and consumes food. This is key to a sustainable world.

The panel discussion ‘Impact of desertification in food systems’ was livestreamed on 17 June 2020, the UN World Day to Combat Drought and Desertification. Click here to watch the video: Click here