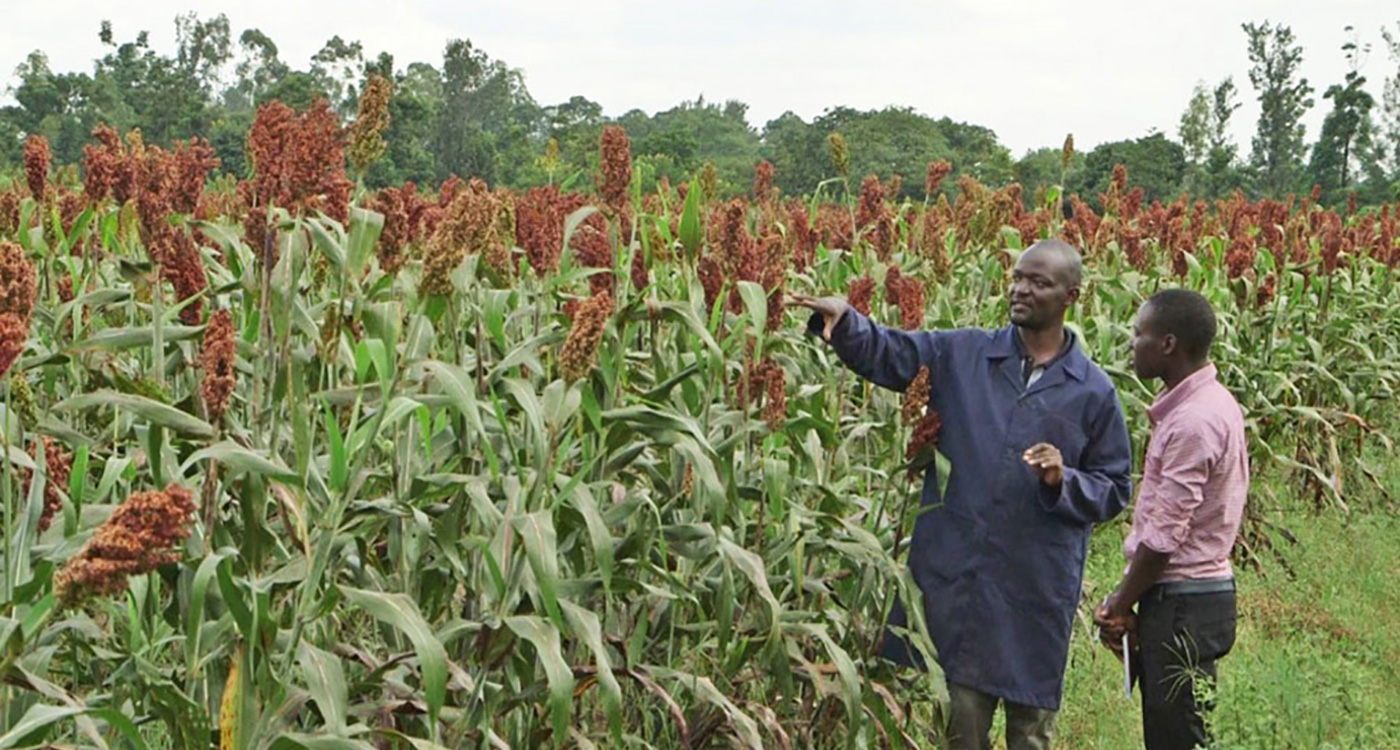 Mr Daniel Ajaku (ICRISAT Research Technician) with a student at a seed multiplication plot of sorghum variety IS 8193. Photo: ICRISAT

July 2017 saw the release of four new sorghum varieties in Uganda by the National Semi-Arid Resources Research Institute (NaSARRI), one of the implementing partners of the Harnessing Opportunities for Productivity Enhancement of Sorghum and Millets (HOPE) project. The varieties IESV 92043 DL, IS 8193, ICSR 160 and GE 17/1/2013A, (of which the first three were developed at ICRISAT Nairobi, while the last was acquired from Purdue University, USA) possess critical traits such as resistance to drought, diseases and pests.

Uganda is one of the three countries in Eastern and Southern Africa (ESA) that are implementing the second phase of the HOPE project (HOPE 2). One of the key mandates of HOPE 2 is to fast-track the release of varieties developed during the previous phase of the project
(HOPE 1).

IESV 92043 DL is a variety of medium maturity, has grey seed color, and is drought tolerant and midge resistant. Bred by the ICRISAT-Nairobi program, it is an open pollinated pure line variety developed through pedigree selection from cross KARI Mtama 1 x Seredo. This variety is also released in Somalia and Zimbabwe (by Progene Seeds Limited for chibuku beer brewing).

IS 8193 is a red-seeded, early-medium landrace from East Africa reintroduced from the ICRISAT Genebank in India and preferred for blending with cassava to make ugali. The variety has also been released in Kenya and Rwanda. With the harmonized seed regulations in the region, these varieties are likely to get into the regional variety release catalog, making seed production and marketing easy.

ICSR 160, a white-seeded variety from ICRISAT India, was introduced as a Restorer or Male Parent (R-Line) for hybrid development. However, it has adapted well as a variety with very good brewing qualities for lager beer (no tannin and high extracts).

GE 17/1/2013A is a Striga-tolerant variety obtained from the sorghum improvement program at Purdue University, Indiana, USA.

All the four releases showed resistance to covered smut, which was a big menace for the commercial check SESO 3.

IESV 92043 DL, IS 8193 and ICSR 160 were sent to NaSARRI from the ICRISAT-Nairobi breeding program in 2014 in an advanced trial kit as a spillover from HOPE 1. After two years of testing, they were selected and entered into the National Performance Trial (NPT) and the Distinctness, Uniformity and Stability (DUS) tests in the long rainy season (March–July 2016) and in the short rainy season (Aug–Dec 2016). They were then fast-tracked for release under the HOPE 2 project.

Dr Eric Manyasa, ICRISAT Sorghum Breeder is pleased with the rapid nature of the release. “We expected that the earliest release of new sorghum varieties would be in 2018 under this second phase. Moreover, Uganda only had finger millet breeding activities in the first phase of the project. Therefore, it is a remarkable achievement by the Uganda team led by Dr John Ebiyau, Sorghum Breeder, to have released these varieties in 2017,” he reported.

“Phase 2 of this project is designed to build on the achievements of the first phase,” says Dr Moses Siambi, ESA Regional Director and project team leader, ICRISAT. “The successes being realized now are a clear demonstration that having access to sustained funding is crucial for delivery of the final products to the farmers.”

Delivering the new varieties to farmers

Inefficient seed production and lack of seed distribution and quality assurance systems have been identified as being some of the key constraints that prevent farmers from benefiting from improved quality seed. HOPE 2 has a strategy to address some of these issues by having an integrated approach (working with both informal and formal seed sectors) to improve farmers’ access to good quality seed:

Sensitizing end users, including processors, on the specific qualities of the new varieties

Creating a market and a demand pull for these varieties.

How? The project team plans to engage with the seed players in Uganda, both formal (Pearl Seeds and Naseco Seeds) and informal, to ensure seed production and delivery. They will train farmers and other emerging seed enterprises in each of the major agroecological zones, on production of Quality Declared Seed (QDS), marketing and group dynamics. The seed production and marketing training materials developed during HOPE 1 will be adapted to suit small-scale QDS enterprises. Additionally, agro-dealers and emerging seed retailers will be trained on agronomy and sensitized on the end-user attributes of the improved varieties. They will also be linked with QDS producers and supported to market the seed varieties.