Go Bhaarati Millet’: Everything in millet 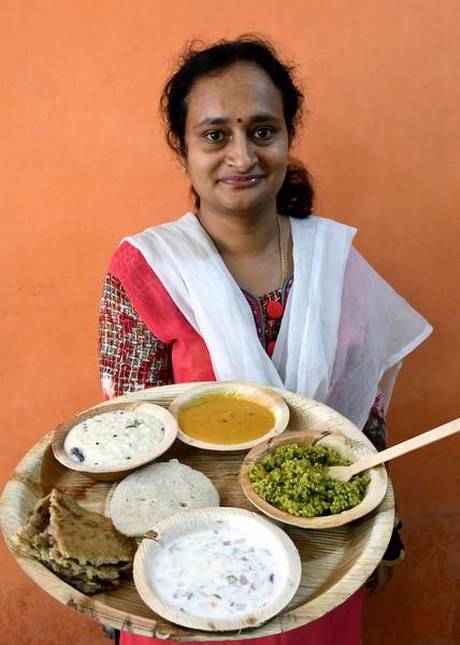 This restaurant is encouraging people to adapt millet-based diet

S Sudha has been batting for a millet-based diet for few years. In the last eight months, however, she has taken a more direct approach by opening the Go Bhaarati Millet Restaurant to help people switch to millets from rice and wheat.

The restaurant offers breakfast and lunch and Sudha says, “We get about 40 customers daily for breakfast. As for lunch, most people prefer to order via UberEats.” The restaurant has no fixed menu. At breakfast one can expect idli, utappam, upma, poha and bisibellibath.Popular dishes during lunch are khichri, millet corn rice, millet fried rice, millet biryani. Those who have a sweet tooth can try the millet paayasam, millet laddu and flaxseed laddu.

Regular customers are a part of WhatsApp group where they get daily updates on the breakfast and lunch menu. Over the week, she prepares the meals using all five types of millets: foxtail, proso, kodo, barnyard and little millet.

There are only two tables in the restaurant but don’t let the modest set-up deceive you. I ordered an unlimited millet meal which hadcoriander spinach proso millet and raita, jowar idli, jowar uttapam and foxtail millet and curd. From the first bite, the message was clear — healthy food doesn’t have to compromise on taste. With measured spices and salt, all meals had a distinct taste.

I started with jowar uttapam. It was soft and I could not resist having another portion. However, the jowar idli was rather hard. Unlike the rice idli, this was much heavier. Both were served with tomato, onion and peanut chutneys. The thick texture of the chutneys and distinct taste make them stand out in comparison to those in other restaurants. The green-coloured proso millet was cooked with spinach and served with onion and carrot raita. And foxtail millet with curd will leaving you wondering whether what you had was curd rice or not.

Even after a wholesome meal, I realised that I didn’t feel heavy. Go Bhaarati Millet Restaurant checks all the boxes — quantity, taste and health.

It was a personal tragedy that made Sudha shift to a millets diet. Five years ago, Sudha lost her father to diabetes. A few months later , she learnt the benefits of millets and moved away from rice and wheat. . “After seeing the benefits personally, I decided to start a restaurant so that people can eat millet-based food,” says Sudha. She feels best to help people get on to millets bandwagon is to offer tasty food.

Srinivas Rao, who works at A to Z papers, says, “After switching to a millets-based diet, my diabetes has been under control. This was not possible by relying only on medicines.” However, he is the only one who eats millets in his home.

Sudha hopes her meals can help make a change in people’s attitudes to millets.