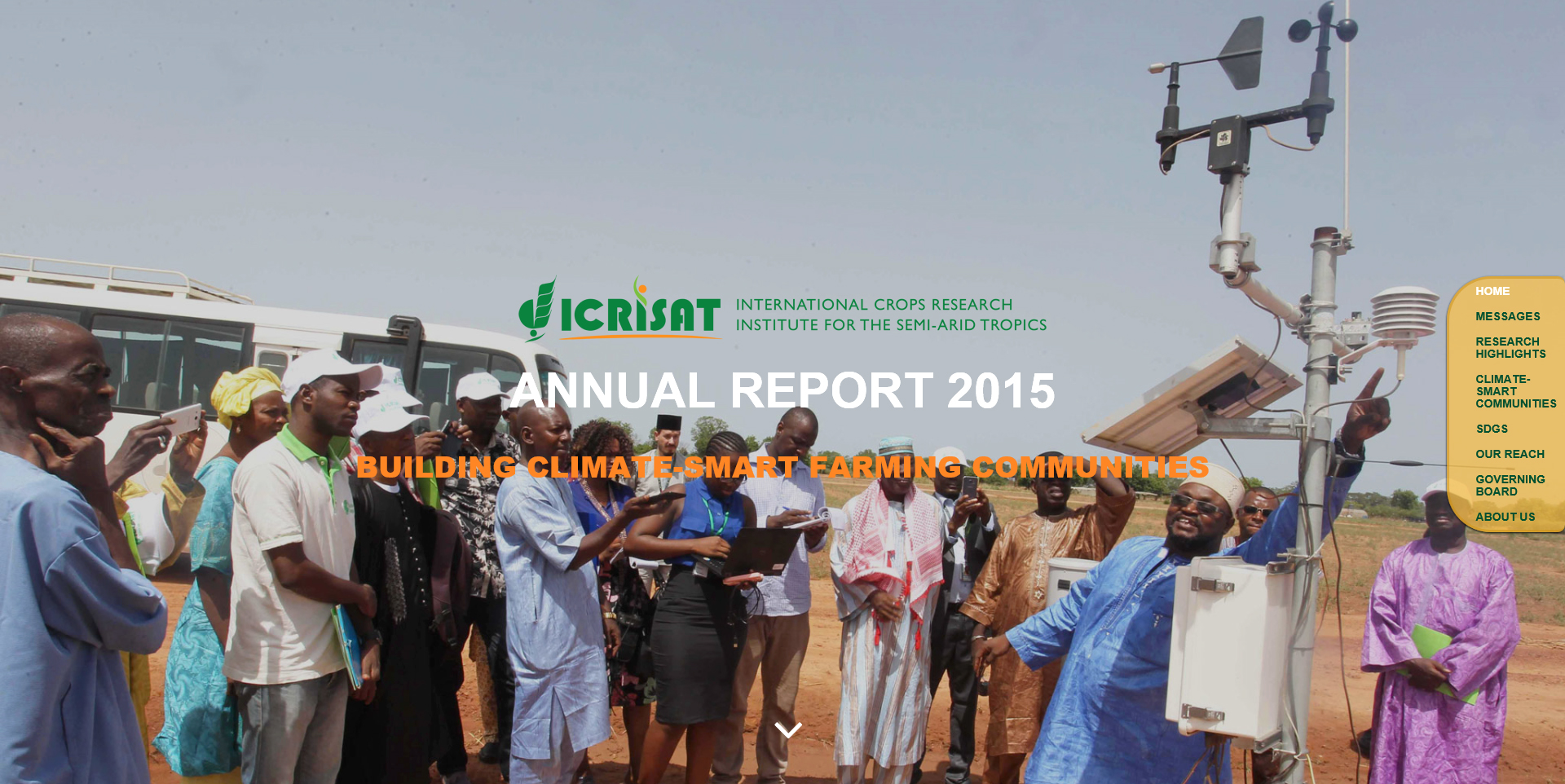 To assist farmers cope with climate change ICRISAT has been working on different approaches. The thrust, lessons learnt and the impact of five main models used for building climate-smart villages have been compiled and released this week as part of a feature in the ICRISAT Annual Report.

Working for over 40 years in the semi-arid tropics, with varied partners, ICRISAT has developed climate resilient dryland crops and a pool of climate-smart technologies that are used in all of its climate-smart project interventions.

Put together, the approaches focused on equipping farmers to use climate-smart scientific interventions and innovations, use climate information for cropping decisions, diversify livelihoods, link to markets, make agriculture profitable, rehabilitate and restore their environment and influence policy makers.

The five approaches highlighted for building climate smart villages include:
The watershed management approach focuses on rehabilitating agroecosystems and deploys a pool of climate-smart agricultural practices developed by ICRISAT which have resulted in increasing crop yields and incomes of farmers. This approach which is gaining momentum in India is also favored by companies for their corporate social responsibility activities. The success of this approach has led to efforts to replicate it in sub-Saharan Africa.

The futuristic multi-model approach uses computer simulated scenarios and to give policy makers in Zimbabwe the climate scenario up to the year 2050. The result was renewed support for promoting dryland cereals – sorghum and millet and greater support for groundnut value chains. With the support of the Government of Zimbabwe, ICRISAT imported 20 tons of groundnut seed from Malawi which was distributed to farmers for seed multiplication and testing.

The digital technologies approach has helped farmers from the Doggoh community in remote Ghana to adopt climate-smart agricultural practices and take up agroforestry in a big way. Farmers who had never used a phone are now using mobiles for climate information to make cropping decisions. About 90% of the farmers find the weather alerts useful and 64% of them also make use of the helpline when needed.

The metrological advisory and farm systems approach used in Mopti, Mali, demonstrated that climate change adaptation is achievable by using eco-friendly methods and climate information. Close to 76,000 women and 94,000 men representing all stakeholders in the value chain reported using climate information in their decision making.

The climate and crop modelling approach helped farmers who followed crop advisories in the drought-prone district of Kurnool in Andhra Pradesh, India, to earn 20% more than those who did not. The success of this pilot project has led to its expansion in other villages of Andhra Pradesh and the neighboring state of Karnataka.

To know more about our climate-smart village approaches read the ICRISAT Annual Report 2015.

For the interactive version see here