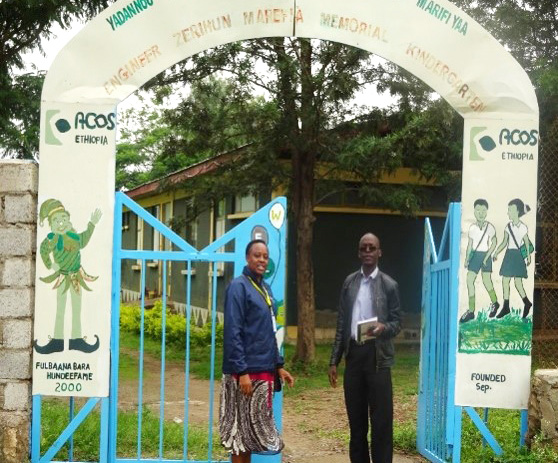 A kindergarten for children of female employees of the Agricultural Commodity Supplies (ACOS) factory in Ethiopia, is helping boost the productivity of the workers of the factory. This, in turn, leads to an efficient and profitable value chain for common beans and chickpeas.

ACOS grain exporters are one of the main stakeholders aggregating and processing common beans and chickpeas in the Adama area of the Great Rift Valley region of Ethiopia.  The factory, with a processing capacity of 40,000 tons/month is a major employer in the region. Women workers, many who have young children to care for, form a critical part of the factory’s workforce.

It was observed that while they were at work, the workers were constantly worried about the safety, comfort and care of their children.  The factory management was recording low levels of productivity from these women, because of the clash between their child-care needs and their focus on bean and chickpea sorting work. To address this issue, the factory management came up with an innovative solution that was responsive to the women’s needs in the context they were in.

In the year 2000, as part of their Corporate Social Responsibility (CSR) program, ACOS started a kindergarten in the factory premises for children of their female employees. It hired teachers and early child development care workers, bought early childhood training materials and started an education program aligned to the Ethiopian school system.  Children could study in this school till they were ready to join the first grade of primary school at age 7, at which point they could move to regular schools.  Over time, the kindergarten has opened its doors to children of all staff and the general community in the area surrounding the factory.

With the setting up of the kindergarten, female workers at ACOS would come with their children to work each school day and drop them off at the kindergarten where the children would learn, play and be cared for, while the workers focused on their jobs.

This gender-responsive CSR initiative has not just directly improved the quality of life for the children and the women workers, it has also indirectly boosted the productivity of the common bean/chickpea legume value chains.

Worker output: With the assurance that their young children are well cared for, workers’ efficiency at ACOS has been enhanced. Staff turnover has reduced significantly, while the amount of work time per week and loyalty to the company have increased considerably. Children at the kindergarten while their mothers are at work. Photo: C Ojiewo

Child nutrition: As part of the school program, the children are provided with meals containing, among other nutrients, nutri-dense legumes.  Providing a balanced diet with legumes as a source of protein and micronutrients helps to solve the age-long problem of malnutrition.

High-quality education: The children at the kindergarten receive good quality early childhood education, which feeds the Ethiopian education system with young students that are well prepared. This improves the odds of their success further along the education system. Also, since their mothers have jobs, their probability of finishing school at advanced levels is enhanced.

On-farm use of Tropical Legumes III (TL III) improved varieties:  ACOS is a member of the national chickpeas and beans platform, currently convened with contributions from TL III in Ethiopia.  In this position, ACOS gives a strong indicator of the varieties that are in demand in the export market; hence, it directly influences the varieties developed and released from breeding programs.  It also provides a market for farmers growing TL III bean and chickpea varieties through direct contract farming as well as being a main buyer from the Ethiopian Commodity Exchange. Thus, ACOS plays a key role of stimulating on-farm demand for improved varieties released by the breeders at the bean research program at Melkassa Agricultural Research Center (ARC) and the chickpea research program at Debre Zeit ARC with investments from TL III.

Consequently, a gender-sensitive and considerate policy and action at ACOS has influenced the entire
chickpea/bean value chain positively and brought collective gains to all involved.