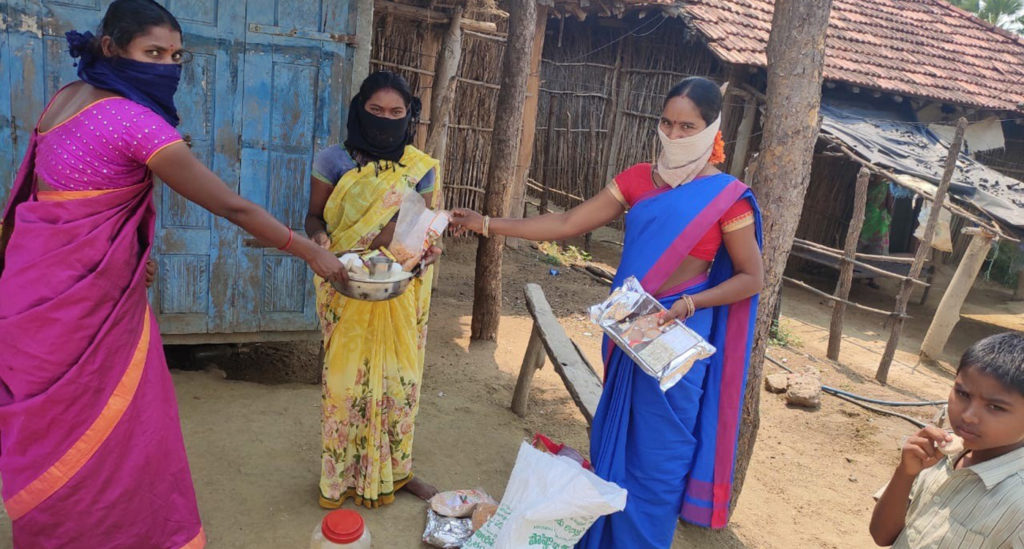 To ensure nutrition sufficiency in children, pregnant women and lactating mothers of tribal communities in Telangana, India, during times of lockdown, ready-to-eat foods containing millets, sorghum and pulses produced by ICRISAT are being provided at their doorstep.

The foods are distributed under Giri Poshana, an initiative in which ICRISAT and Tribal Welfare Department of Telangana State have been collaborating to improve dietary diversity and nutritional status of tribal populations. The initiative targets beneficiaries in three Integrated Tribal Development Agencies (ITDAs) of Utnoor (Adilabad district), Eturnagaram (Jayshankar Bhupalpally district) and Bhadrachalam (Bhadradri Kothagudem district) of Telangana.

The local farmers are also benefited as they now have demand for their crops, he added.

The initiative, which began in 2019, was being implemented through select Anganwadi centers (community centers for education, health and other purposes) in the ITDAs. The beneficiaries were being provided three ready-to-cook and three ready-to-eat products as supplementary food, served as breakfast and evening snack, in addition to the governments ICDS mid-day meals. However, after COVID hit and lockdown was imposed, the Anganwadi centers closed and nutrition of the beneficiaries became a matter of concern until the program team worked to change the model of implementation.

“The team has explored different ready-to-eat products from dryland crops, which can replace the ready-to-cook products so that the beneficiaries can easily consume at their households without the need for much cooking. While identifying the products, it was ensured that nutritional values of the new food products are similar to the ready-to-cook products, which have been temporarily discontinued during lockdown,” Dr Mazumdar explained.

Accordingly, millet flakes mixture, peanut – fried gram chikki (energy bar) and ragi (finger millet)-jaggery cookies were added to three other ready-to-eat foods – Energy (Peanut) bar, Nutri-Cookies and Jowar bytes. In April and May, 2020, 7421 beneficiaries received Giri Poshana food, which is being distributed by Anganwadi teachers at the doorsteps of beneficiaries.

Beneficiaries and the teachers are also being sensitized about nutrition and hygiene through instructional videos and brochures. “They are eating on time and are eating healthy food. In the lockdown, it was difficult for us to go to the market and buy food. Also, children liked eating this food and as a mother it is assuring,” Ms Sudi Gowthami, a mother of a beneficiary child in Bhadrachalam, said.

Further, eight food processing units in ITDA areas managed by tribal women-led Joint Liability Groups (JLGs), will soon become operational to produce nutritious convenience foods using locally grown crops. This move is also set to boost local employment while ensuring healthy food supply. The construction of these units has been nearly completed in all the three ITDA locations and a few of them have commenced dry runs.

Pointing to capacity building of 75 tribal women to be “Nutrition Entrepreneurs”, Dr Mazumdar argues for urgent evolution of local value chains around local food production, local value addition and local consumption to make vulnerable tribal communities sustainable post-COVID.  Post restrictions when the threat from virus is better manageable, tribal women, with their newly acquired skillsets in the areas of food processing, food safety and business development, would be ready to start their enterprises and promote local dryland crops while contributing to building of healthier tribal communities, he added.