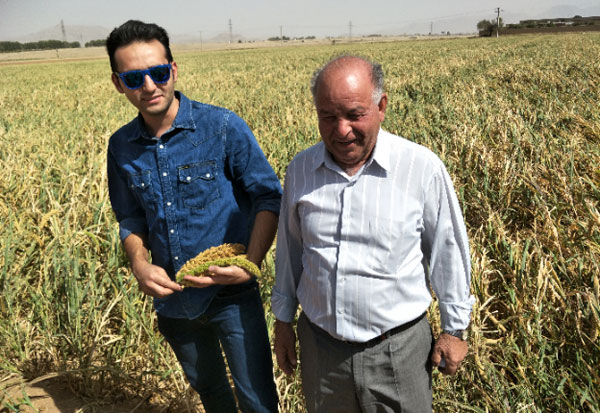 With his hand on his heart, farmer Moobed says, “I am a man of the desert and it is my heart’s wish that you come again and help us”.

This was the message to a group of ICRISAT scientists invited by the Government of Iran to assist with more drought tolerant and resilient crops. Increasing water shortages, overuse of ground water, harsh environments, degraded soils, increasing salinity and rising temperatures – Iran’s farmers battle a whole host of adversities. These dramatic changes have the highest levels of government concerned. As Dr Abbas Keshavarz, Iran’s Deputy Minister for Crop Production noted, “We have to save water to save our country. We need to do this with crops that can survive with less water. We have passed the point of replenishing what we use and ground water is in crisis. Fifty-five percent of our irrigation water comes from the ground water.”

Wishing to transform its agricultural systems to cope with these challenges, several Iranian ministries have come together to escalate solutions. This included asking ICRISAT to help with its expertise in its mandate crops of sorghum, millets and chickpea.

Says Deputy Minister for Agriculture and Head of AREEO (Agricultural Research, Education and Extension Organization), Dr Eskandar Zand, “If we are to achieve sustainable agriculture in Iran, these crops you are working on are very important.”

Dr Javad Mozafari, Director General, Academic Relations and International Affairs, AREEO believes “Agriculture is becoming more difficult in Iran and these crops are our fall back crops when everything else fails. We cannot continue only with our classical production of wheat and maize – we have to prepare for the future.”

Dr Babak explains the needs and changes to the agricultural system in Iran.

At the invitation of AREEO, an ICRISAT delegation travelled to Iran 1-6 Oct 2017 to explore opportunities for collaboration. The delegation met with Iranian research institutes, representatives from CGIAR Centers with offices in Iran (CIMMYT, ICARDA, IRRI) and local farmers. Dr Peter Carberry, Deputy Director General – Research at ICRISAT led discussions and noted that, “All your areas of interest you mentioned are our areas of expertise”. As a starting point, ICRISAT improved germplasm will be provided to AREEO researchers. Further collaboration will depend on negotiations on areas of mutual research interest. Photo caption: ICRISAT’s team interacts with Iranian farmers and scientists to assess the potential for collaborations.

ICRISAT scientists also interacted with farmers as part of their visit.  Farmer Moobed explained to ICRISAT scientists, “Four years ago this was just desert. When I planted it was 50o C and the maize did not produce. Now I have moved from maize to sorghum, I have a crop.  I turned the desert green with sorghum”. Dairy producers such as Moobed currently prefer maize and achieve good milk productivity. However, most do not consider growing sorghum for feed and forage because it is foreign to them.

With increasing temperatures and stress on water resources, some farmers have little option but to switch to dryland crops. Farmer Maleki and his son turned to millets to cope with the changes. They ran an orchard 25 years ago but irrigation led to high soil salinity and all their trees died. “Thanks to advice from Dr Masoud Torabi, Sorghum Breeder, Department of Crop science, Esfahan Agriculture and Natural Resources Research and Education Center, AREEO, we now grow foxtail and proso (common) millet. We really had no choice as nothing else could survive in these soils.” With almost 4 tons per hectare of millets in saline and alkali soil with low quality water, the next challenge for this farmer and many others is marketing their products in a fragile market where there is no demand for their grains except for birdfeed! This underlines the immediate need to create value chains  which can help farmers to earn more money from their fields, create jobs for their families and get them involved in the whole value chain. Hence, farmers can aspire for better livelihoods.

As almost no sorghum or millet products are currently sold for human consumption, the potential to develop businesses and employment through promoting their high nutrition and health benefits was recognized in discussions. Currently there are few gluten-free wheat-alternative products available in Iran and people with gluten-intolerance have to import their own products at very high prices. Diabetes is a problem and, given that millets and sorghum having low glycemic index, they can be a good food for managing or preventing diabetes, especially as an alternative to white rice. The high macro and micronutrients of millets and sorghum, like calcium and iron, were also seen great selling points for developing the market.

Quinoa was not known a few years ago, but with popularity in other parts of the world and marketing in Iran, this is now available and consumers pay high prices. It is an example to show that consumer markets can be developed with a product that provides value and is marketed well.

In fact, foxtail millet (commonly known as Gavars) is an ancient grain of a specific area in south-east Iran and is still eaten today. During winter and during Ramadan, its slow digestibility provides energy for a longer time. It is traditionally eaten as a porridge or with a meat or as a flour to make chapattis. However, this is very localized and not known outside of this area. The little awareness about millets and sorghum is of an image of being a poor persons’ food – a similar issue in many parts of India and Africa.

After extensive interactions, the delegation noted that Iran’s inclusion of adapted dryland crops will require consideration of the entire value chain. A holistic approach requiring soil and water management, capacity building of scientists and farmers, through to market development is needed. Several priority areas for collaboration were discussed, with emphasis on sorghum and millet industry development to target alternatives to maize and alfalfa in marginalized areas as well as chickpea.  The visit concluded with marking priority areas for collaboration:

Immediate actions will include sharing of genetic material from the ICRISAT genebank, building of the capacities of researchers and students from Iran, and scientist-to-scientist knowledge sharing, especially on the breeding system.

Agriculture in Iran – overview directly from scientists and Ministry presentations

4 million farms with an average size of 0.7 ha.

16 million people work on the farms. 47% of jobs are in agriculture.

There’s a marked increase in soil and ground water salinity due to long term irrigation schemes.

Climate change has led to extreme temperatures and reduction in rainfall: more extreme high and minimum temperatures, especially in winter.

Water run-off is now being managed better through the construction of underground dams.

About 95% of farmers have smart phones but rarely is agriculture-relevant information shared through mobile technology. This technology is in high demand by different research institutions under AREEO (especially SPII and ASRI) for better communication with farmers in remote areas. ICRISAT’s experience and expertise are needed to establish the platform.

A survey showed that most information about scientific technologies and practices was not reaching the farmers so a major new extension approach is just being set up including: apps targeting farmers; focused areas for extension officers; webinars to farmers through video conferencing; creation of educational videos for farmers; open-access databases so scientists and farmers have easy access to relevant publications and materials.