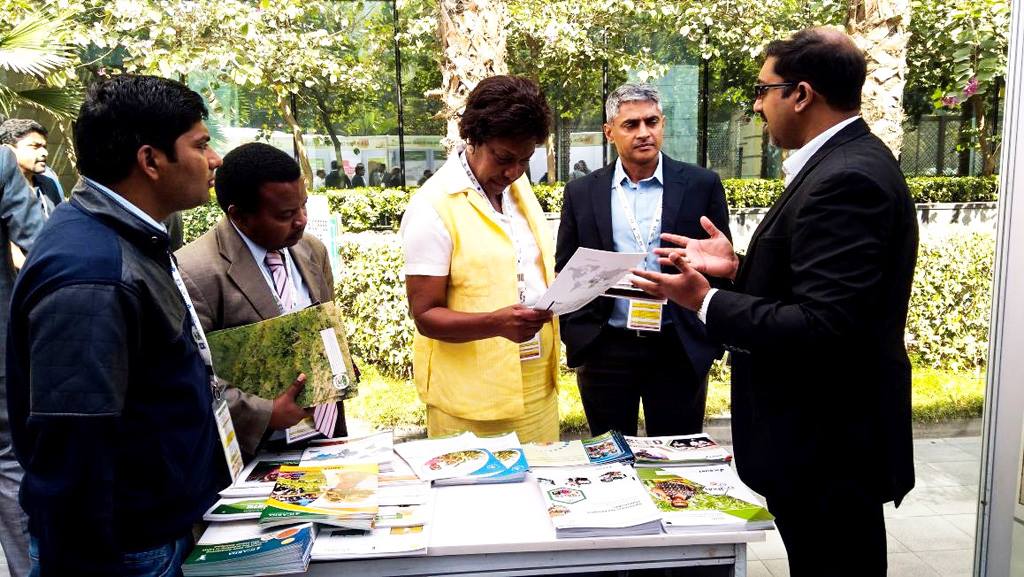 Charity Ngilu, Governor of Kitui County, Kenya (one of the Chief Guests at the Conclave) at the GLDC stall.

ICRISAT, Grain Legumes and Dryland Cereals (GLDC) team participated in the Pulses Conclave 2018 held from February 14th to 16th, 2018 at Delhi, India. The biennial event was hosted by the India Pulses and Grains Association (IPGA), which is considered as the apex body of India’s pulses and grains industry and trade.

IPGA is one of the partners in the CRP on GLDC that is led by ICRISAT.

As a support partner for the Conclave, ICRISAT showcase activities proposed under its newly unveiled flagship research program. Visitors to the exhibit stall were provided with an overview of GLDC, and partnership opportunities were explored with other exhibitors who comprised of trade associations, and participants offering value-added services in the pulses value chain. ICARDA also participated in the event.

Presence of GLDC team at the conclave created awareness about CGIAR’s role in general, and CRP-GLDC in particular. GLDC focus research areas among selected grain legume crops (cowpea, chickpea, pigeonpea, and lentils) were an exact match with many discussion and deliberations at the conclave. Dr D Kumara Charyulu of ICRISAT made a presentation on the newly launched CGIAR Research Program on Grain Legumes and Dryland Cereals at the Conclave.

Among the visitors to the stall was H.E. Charity Ngilu, Governor of the Kitui County from Kenya and her team who showed interested in ICRISAT’s research work. Since Smart Food Kenya already is working in the county, this conversation could lead to opening of GLDC-related activities in the region.