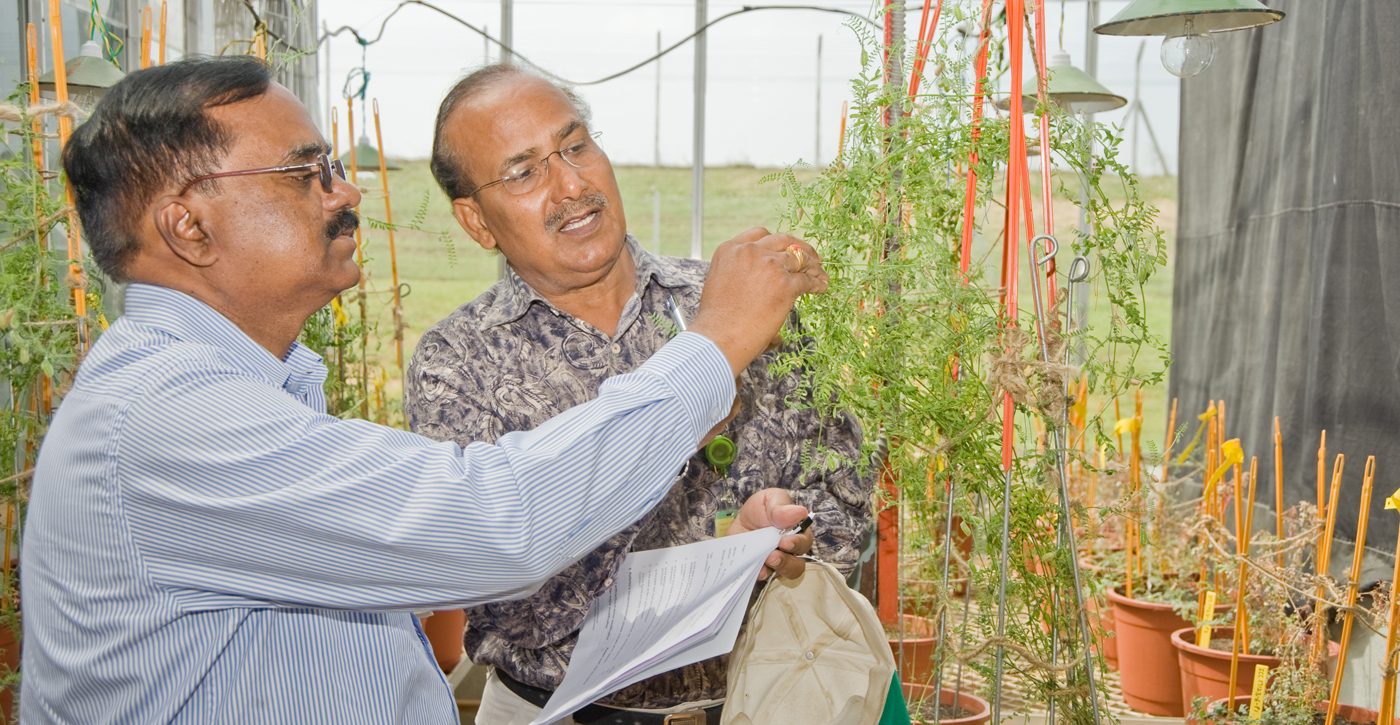 Dr Hari D Upadhyaya, ICRISAT, Head, Genebank, and Principal Scientist, has received the global Legacy Awards given by the Crop Trust for his lifetime work on preservation of crop diversity. Photo: ICRISAT

Hyderabad (24 February 2018): Dr Hari D Upadhyaya from the International Crops Research Institute for the Semi-Arid Tropics (ICRISAT), India, has received the global Legacy Awards, along with six other scientists, for exceptional contribution through his lifetime’s work on preservation of crop diversity.

“The Crop Trust Legacy Award recipients are the global gatekeepers of crop diversity, having spent decades committed to their belief in the absolute importance of seed conservation,” said Marie Haga, Executive Director of the Crop Trust. “They understand – and have helped thousands of others learn about – the deep connection between seeds, our agricultural history, and our future. Without the passion and dedication of these scientists the world would be a far less rich, far less diverse place,” Haga added.

“This award is unique as it recognizes ICRISAT’s work not only in conservation of germplasm for global community, but also our unparalleled efforts in making this diversity usable through outstanding research. ICRISAT has deposited over 111,000 accessions of its mandate crops and five small millets at the Svalbard Global Seed Vault,” Dr Upadhyaya said.

Dr Upadhyaya is currently based at ICRISAT’s HQ in Hyderabad as Head, Genebank, and Principal Scientist. He has received several international awards in recognition of his contribution to the field of seed conservation and promotion of crop diversity.

ICRISAT’s Genebank initiative works to address the challenges of climate change, desertification, land degradation and a host of other factors that threaten to impact the productivity and resilience of crops in the drylands, with severe consequences for food security. Evaluating germplasm for traits of economic importance and using them in crop improvement programs with the help of modern tools can stave off hunger and preserve crop diversity for the future.

The award was formally conferred in Svalbard, Norway, today (25th February) to coincide with the latest shipments of more than 70,000 seeds to the iconic Seed Vault. These will take the total number of seed samples deposited there over the last decade to more than one million. Deposits are made by genebanks from all over the world, to back up their own collections safely and securely.

Several of the Crop Trust Legacy Award recipients have made invaluable contribution at the vitally important genebanks of CGIAR, which conserve and share hundreds of thousands of seeds of food and forage crops. Duplicates of seeds from CGIAR genebanks make up the majority of varieties currently backed up in the Svalbard Global Seed Vault.

In addition, a Legacy Award will also be given to Cary Fowler. Cary was one of the visionaries of the Svalbard Global Seed Vault and worked tirelessly for its creation. He is currently a special advisor to the Crop Trust after serving as the organization’s Executive Director from 2007-2012, a period that saw the Vault being designed and constructed, as well as receiving its first shipments of seeds in 2008.

Dr Hari D Upadhyaya is an Indian national and has a PhD in plant breeding from GB Pant University of Agriculture and Technology, India.

He started his career as postdoctoral fellow at ICRISAT and then moved as Groundnut Breeder and Head of Oilseeds Program at the University of Agricultural Sciences, Raichur, India. Later at ICRISAT he worked to develop early maturing, drought and aflatoxin resistant, and high oil groundnut varieties. Thirty of his varieties are grown in 22 countries. His seminal work on postulating mini core concept has been recognized as ‘International Public Goods’, which led to the identification of climate-smart and seed nutrient dense germplasm.

He is Fellow of the Crop Science Society of America and the American Society of Agronomy. He has been awarded the Crop Science Research Award and International Service in Crop Science Award; Frank N Meyers Medal, Dr Harbhajan Singh Memorial Award; Doreen Mashler and King Baudouin awards. He has coauthored over 700 articles including over 280 refereed journal articles; reviews, book chapters, genebank manual, and edited two books.