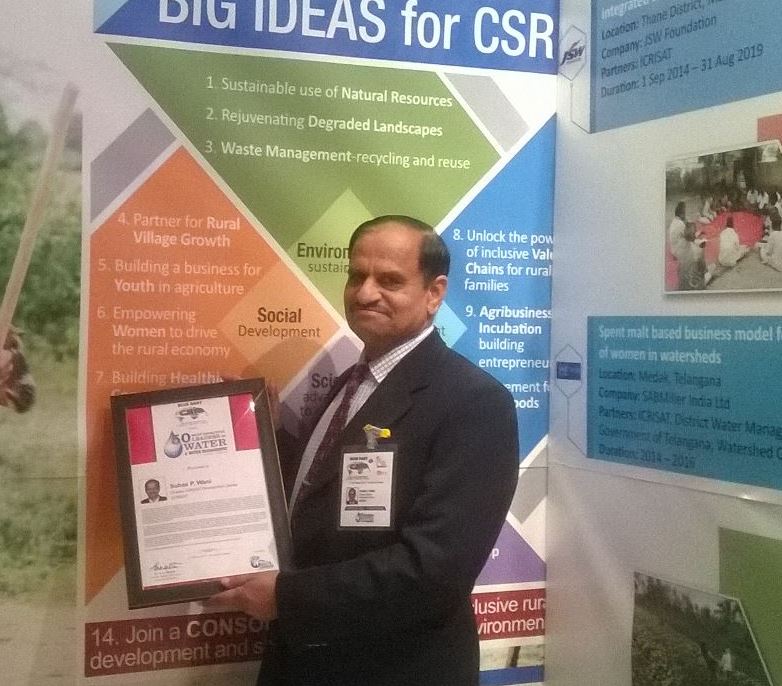 Hyderabad, India (18 February 2016)—  ― Dr. Suhas P Wani, Director of ICRISAT Development Center at the International Crops Research Institute for the Semi-Arid Tropics (ICRISAT) has been honored as one of “50 Most Impactful Leaders in Water & Water Management”. It was in recognition for Dr Wani’s years of dedication towards water conservation and management.

With 35 years of service in ICRISAT, Dr. Wani was one of the early pioneers in watershed management in India.

“Earlier farm watersheds were implemented in different Indian states like Madhya Pradesh, Maharashtra, Karnataka and Andhra Pradesh and revisited in 1995-96 to assess the impact. Based on the learnings, except in the use of fertilizer and improved seeds, farmers did not continue other interventions such as soil and water conservation. In 1999, based on these experiences, a new model was developed for enabling community participation and evaluated at Adarsha Watershed in Kothapally,” noted Dr. Wani.

Since then, Dr. Wani has led the field in the science of scaling-up and has made remarkable contributions to benefit millions of farmers in Asia, particularly in the area of sustainable agriculture for improving rural livelihoods.

He has been a catalyst, contributing to the creation of the Bhoochetana initiative in Karnataka state, a strong partnership that reached 4.75 million farmers in five years, with a 20-66% crop increase and total net benefits of $350 million.

“I am delighted to receive this award, which I think is a great recognition to our efforts towards water management especially in the drylands where ICRISAT specializes. I would like to thank my colleagues at ICRISAT and our partner organizations for all the support and guidance,” said Dr. Wani after receiving the award. He was given the award at the World Water Leadership Congress held in Mumbai on 17 February.

Outside of India, Dr. Wani has helped thousands of farmers across several Asian countries including China, Philippines, Thailand and Vietnam.

To his credit, Dr. Wani has published 526 research papers in national and international journals, books and conference proceedings.

He is also the recipient of several national and international awards including: National Groundwater Augmentation Award from Indian Ministry of Water Resources; a Gold medal from the Government of Vietnam for the improvement of agriculture and rural development in Vietnam, Fellowship from Yunnan Academy of Agricultural Sciences (YAAS), Kunming, China. In 2015, he received the  Krishi Sanman Award by ABP Majha, Abhinav – Innovative Practices in IWMP” from the Indian Ministry of Rural Development and the Asian CSR Leadership Award.