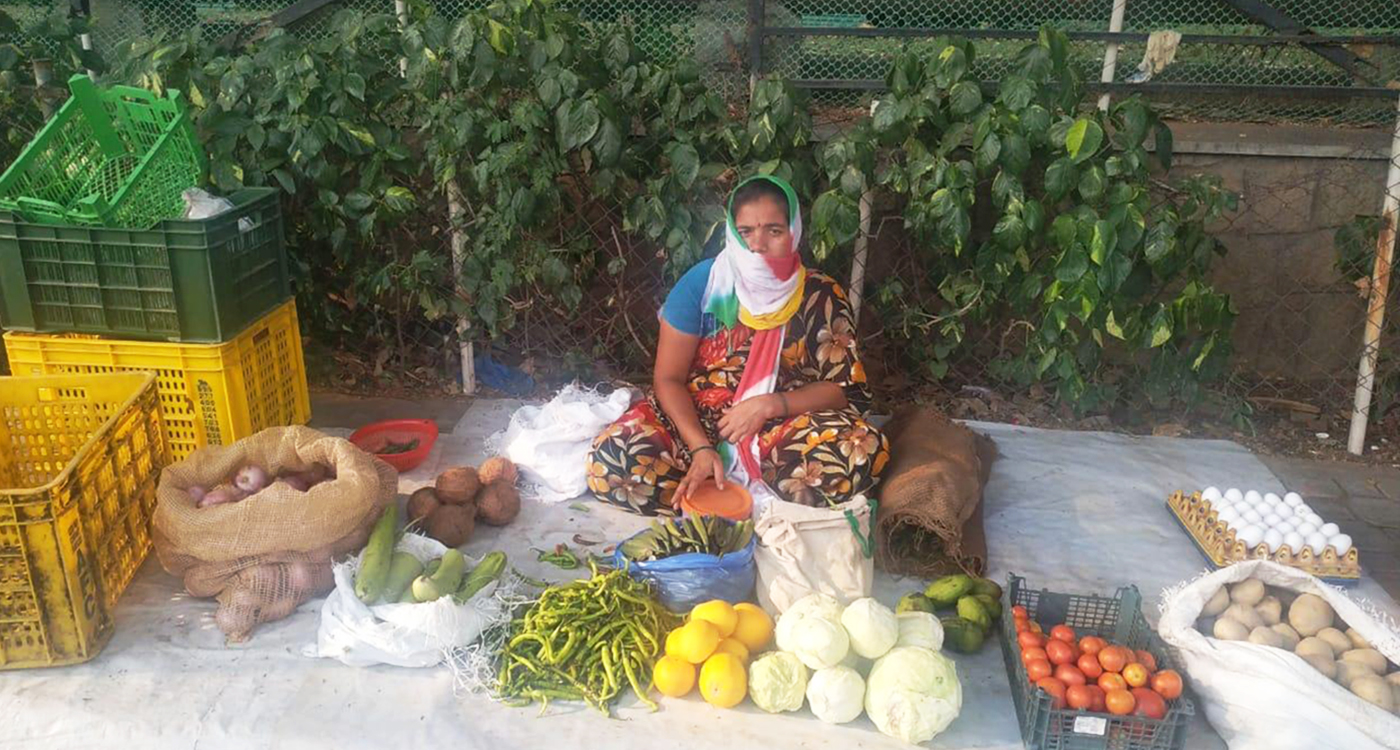 The recently extended lockdown in India, now in force until 3 May, is a necessary measure to slow the spread of COVID-19 and thereby save lives. India’s large population and the capacity of the health sector in the country to handle the pandemic means slowing the spread of infection is essential. But the impacts of the lockdown are not gender-neutral. Women are more vulnerable from both a health and economic perspective. Here, Padmaja Ravula from Flagship Projects 1 and 6 shares her insights into the impact of the lockdown on women who work as domestic help or in part-time occupations in urban and peri-urban Hyderabad.

Most of the women living in Hyderabad’s slums work as domestic help in the many apartment complexes and independent bungalows. These women get a monthly salary for their services ranging from Rs 3000-6000 (£31.50-63.00) per household per month, depending on the kind of work they do. Each woman on average works in three to four households. As well as their salary, they also receive payments in kind either as cooked food, vegetables and other essential items.

From the age of 12-13 years, young girls join their mothers to work as maids, get jobs in shopping malls, or look after children of families where both husband and wife are out working. To do this, they discontinue their education. Most young boys also work, either in malls or as mechanics. They are paid only for the days they come to work and are not eligible for any sick leave and sick pay. Men from slum households also do small paid jobs, which may not be regular, or run businesses as auto-rickshaw drivers, or selling petty household items on carts.

Women’s income has become the lifeline for slum households

Since the lockdown began, members of slum households have found themselves without employment. Shops and other businesses are closed, so young boys and girls, and men, are jobless. Their livelihoods are now at stake. As such, the onus of supporting their households has fallen on women, particularly those who continue to work as house maids.

Laxmamma*, who works as a full time servant in my mother house, tells me that she now has the responsibility of taking care of herself, her son, and one of her three daughters’ families. Her daughter, the sole earner of her household, cannot go to her job at a slimming centre. She has two children and a drunkard spouse. Laxmamma’s son works in an automobile showroom, which is also closed, so he has no income. Laxmamma has no choice but to share some of her salary that she gets as a full time servant; she has already taken an advance from her employer to support her family. She is also sharing the food that she receives in kind with her grandchildren so that they do not go hungry.

In another case, Devi*, a widow who works in a Government Bank as a sweeper, recalls that the continued working of banks has helped her family to avoid going to bed hungry. Her daughter, who in normal times works in a shopping mall, and son-in-law live with her. She receives Rs 100 (approx. £1.05) per day and this amount keeps her family going. Devi tells me that they cannot afford nutritious food but at least they are not starving. More concerning, she tells me that domestic violence has increased. Her son-in-law, who is addicted to toddy, beats up her daughter for not giving him money to buy liquor illegally.

Hyderabad has seen a surge in “curry points” in several locations in the city in the past three to four years. These curry points usually sell cooked curries and freshly made rotis in the evening at a very reasonable price. They are managed by poor women and this is their main source of livelihood. In normal times, most of the families where both adults have jobs pick up their dinner from these curry points on their way home. With the lockdown, all these joints are closed.

In order to survive, the women who run these curry points have taken to an alternate livelihood, selling vegetables instead of cooked meals. These women are now risking their health by exposing themselves to infection when they go to buy vegetables from the designated farmers’ markets (rythu bazaars). They are aware of social distancing and taking care of themselves, but they must buy the vegetables so they can earn money and support their families to have enough food.

Many people, especially the affluent households, are also sending their watchmen to the farmers’ markets. Supermarkets are quickly running out of vegetables and limited opening hours and queuing to adhere to social distancing rules means it takes more time to do shopping. This is further increasing the risk of disease spreading as more and more people head to farmers’ markets for supplies.

A growing importance of health

The majority of those living in the slums of Hyderabad now understand the spread of COVID-19 and its health implications. Awareness campaigns by the government and other stakeholders about the spread of the infection and the methods for staying safe are reaching one and all through television, loudspeakers, and mobile phone messages. Even in urban slums, each and every member of the household is aware of the situation; not just aware but fully immersed in it.

That people are taking the advice on board is a very important insight and lesson. Behaviour change communications have helped enormously in changing people’s mindset, enabling them to practise good hand and respiratory hygiene. Women are driving these changes. My watchman’s wife insisted that her husband gets home a liquid hand wash for their use. These women are acting on advice, through their understanding that if they stay healthy they will live, else they will die.

The crisis situation has forced women to think of alternative livelihood options. They have been able to break the stereo-typical roles and explore new opportunities of going to the markets to buy supplies that they can sell on; traditionally this is something only men would do. More than this, collective action is emerging, which is building social capital.

From my discussions with women I have found that one or two women are going to the market to get supplies – vegetables, simple grocery items, and eggs – for other women who are in a similar situation. Once back home, they distribute the items so that each woman can sell them on in their respective localities. The women are taking turns to go to the markets; each woman may go only once a week, thus minimizing the risk to them as well as reducing the crowding in the market.

Women are taking on the responsibility of their families

The women who work as domestic help are now taking on bigger responsibilities. These otherwise looked-down upon jobs are now their salvation, providing a safety net for them and their families. Most members of the household perceived domestic help as a lowly job. Men in particular ridiculed the women saying that all they do is wash a few dishes and clothes, clean the houses and gossip. The money they bring in was previously not considered important. Now, there has been a U-turn. These women are now the breadwinners in this crisis situation.

The extension of the lockdown by another 19 days has been received with mixed feelings by those living in slum households. Some women have told me “Health is more important, our slums do not have adequate infrastructure, so lockdown is better to contain the disease”. In contrast, others say that they fear they will not have enough resources to feed themselves and their families.

Women also fear increases in domestic violence by their spouses. Many men do not have any income of their own during lockdown and now women may not be able to give them money whenever they ask for it. The closure of liquor and toddy shops will lead to these men becoming violent. It’s not just livelihoods, but the safety of the women in these situations that is at great risk.

* The names of people mentioned in this blog have been changed to protect anonymity.

Originally published on the TIGR2ESS blog.