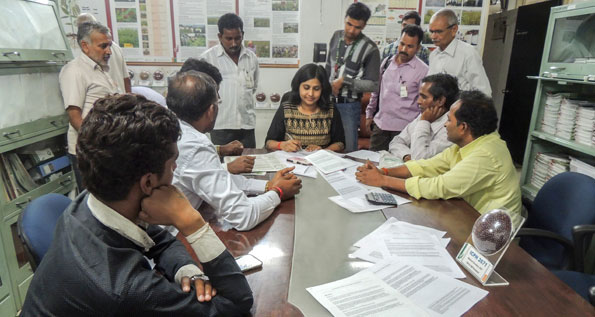 Farmers in Maharashtra, India, are taking to pigeonpea hybrid ICPH 2740 in a big way to combat successive drought years. Despite the drought situation for last two cropping seasons in the state, ICPH 2740 yielded 2 to 3 tons per ha on farmers’ field. The hybrid is also helping farmers break decades-old stagnating yields.

During 2014 and 2015 cropping season more than 30,000 ha was covered with the hybrid pigeonpea ICPH 2740. Farmers are also ready to invest in technologies like micro-irrigation, transplanting, nipping etc., to gain a higher yield.

This has been possible with the support of the Department of Agriculture, Government of Maharashtra, through Rashtriya Krishi Vikas Yojan (RKVY) and Agriculture Technology Mission Agency (ATMA).

More than 300 farmers visited ICRISAT recently to know more about the hybrid pigeonpea and to get seed sample for demonstration in their field. Farmers from both traditional pigeonpea growing areas as well as non-traditional growing areas visited.

The visiting farmers informed that during the 2015 cropping season pigeonpea fetched a high price of ` 8,000-10,000 for 100 kg which was very profitable for them. With the sudden rise in pigeonpea price in the Indian market, farmers from both rainfed and irrigated regions of Maharashtra are interested to grow pigeonpea as it requires minimum inputs and yields higher benefits compared to other commercial crops like sugarcane and rice. The farmers are now ready to even replace sugarcane, a major cash crop in western Maharashtra, with pigeonpea.

In addition, the Krishi Vigyan Kendras (KVKs), in Latur, Osmanabad and Amravati districts have expressed an interest to undertake hybrid pigeonpea seed production in farmer’s fields and requested for technical guidance from ICRISAT. There is a demand for more than 500 ha under seed production though the KVKs and the farmer producer companies (FPOs) during 2016 cropping season. ICRISAT will supply the parent material, provide technical guidance, train the seed producers and monitor the seed plots as well.

During the 2016 cropping season, Department of Agriculture, Government of Maharashtra, will promote ICPH 2740 across 20,000 ha. This year has marked the biggest demand and the pigeonpea hybrid ICPH 2740 is likely to cover more than 1 lakh ha area by farmers of Maharashtra, Telangana, Karnataka, Andhra Pradesh, Gujarat and Madhya Pradesh. This will be celebrating the International Year of Pulses in the true sense.