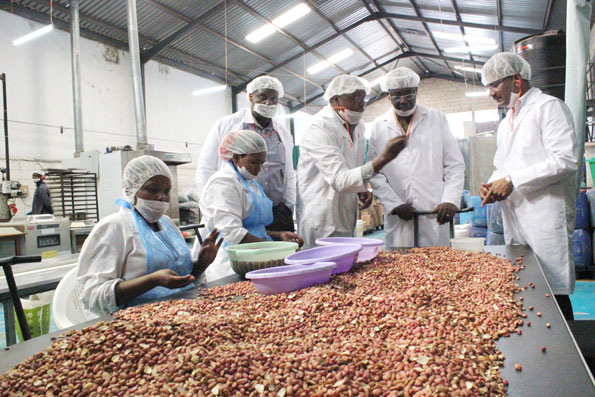 Farmers in Kenya growing improved varieties of groundnut are getting more than double the price for their produce. Having attracted a big buyer through their quality produce, the farmers now have an assured market and are getting better prices. With its developed market for confectionery, peanut butter and other products, Kenya has been dependent largely on imports of groundnut from countries such as Malawi and Zambia. This in spite of many regions of the country having the potential to produce more groundnut.

Low productivity of local varieties (seed of improved varieties are inaccessible due to policy issues), growing varieties that are susceptible to disease, poor agronomic practices and low prices due to poor marketing channels have hampered increasing the area under groundnut. For instance, farmers in Elgeyo, Marakwet and Baringo counties (Rift Valley Province) in Kenya have been growing local varieties, popularly known as Cheplambus local. These varieties are late maturing, small seeded, low yielding and susceptible to disease. The production has therefore been low with yield of about 700 kg per ha compared to potential yields of 2,000-3,000 kg per ha.

“The main challenge is use of poor  management practices. If farmers use suitable varieties, fertilizers, plant at the right time, and protect their crops from weeds, pests and diseases, they will get optimum yields,” said Ms Lillian Jeptanui, Agronomist, Egerton University.

To close this yield gap, researchers from Egerton University and ICRISAT are working together in this region to promote improved varieties that meet end user demand. A number of varieties that were developed by the ICRISAT breeding program in Malawi were sent to Kenya for evaluation. These were evaluated by Egerton University through a collaborative research process and about four to five varieties were selected and evaluated on farmers’ fields. Three varieties were further selected by farmers and officially released, as they met the farmer requirements.

“We introduced CG 7 which farmers call ‘Zambia’ and other popular improved varieties such as the large seeded ICGV 90704 and ICGV 83708,” said Dr Paul Kimurto, Professor, Egerton University. “We are also planning to conduct herbicide weed control trials, fertilizer microdosing, manure trials and drought screening trials so that we can give farmers the best technologies for improved productivity,” he adds.

There were three major challenges that farmers and researchers still faced – accessibility of seed, markets and the cost associated with shelling, which farmers felt was very high. To address these issues, an innovation platform was set up to train farmers on seed production and grain production for the market.

The Chair of the farmers group, Mr David Kiptoo referred to groundnut as the most stable crop in the regions. He said the challenges with the traditional varieties were that they were small seeded, low yielding and required more labor. In addition, the poor road deterred them from accessing urban markets. Brokers exploited them in the local markets.

After the new varieties were introduced, groundnut production in the area improved significantly. “With the new varieties the prices improved. The farmers and buyers loved it because it is big seeded, requires less labor during harvesting and shelling and yields more,” he said.

According to Dr Kimurto, the biggest challenge farmers faced was lack of access to markets and low prices. “The road network is bad hence linkage to markets is poor. There is only one market day in a week and brokers collude to reduce prices from US$0.90 to US$0.50 per kg. Farmers are compelled to sell in order to buy maize which is the staple food,” he says.

To ensure sustainability of groundnut production, the project identified and brought in a buyer – The Greenforest Foods Company. “This is a win-win situation as the company buys unshelled groundnut to reduce aflatoxin contamination and for increasing shelf life. Shelling of groundnut is laborious, leads to sore thumbs, and farmers experience losses of 4-6 bags per ha in the process,” says Dr Kimurto. Last year, the company bought groundnut worth approximately US$12,000, and asked farmers for at least 1,000 bags more. Subsequently, the area under groundnut is now on the rise in Rift Valley.

At a recent meeting with the Feed the Future Kenya Accelerated Value Chain Development Program leadership team, the CEO of Greenforest Foods Limited, Mr Athanas Matheka, said they were planning to sign contracts with the farmers and pledged to purchase at least 100 tons a month from the farmers. “The market is there. All we need is to support farmers to produce more,” he said.

Greenforest Foods is an organic and natural food manufacturer and distributor based in Nairobi, Kenya, that produces and distributes five natural food products including roasted groundnut to major retail stores across Kenya.