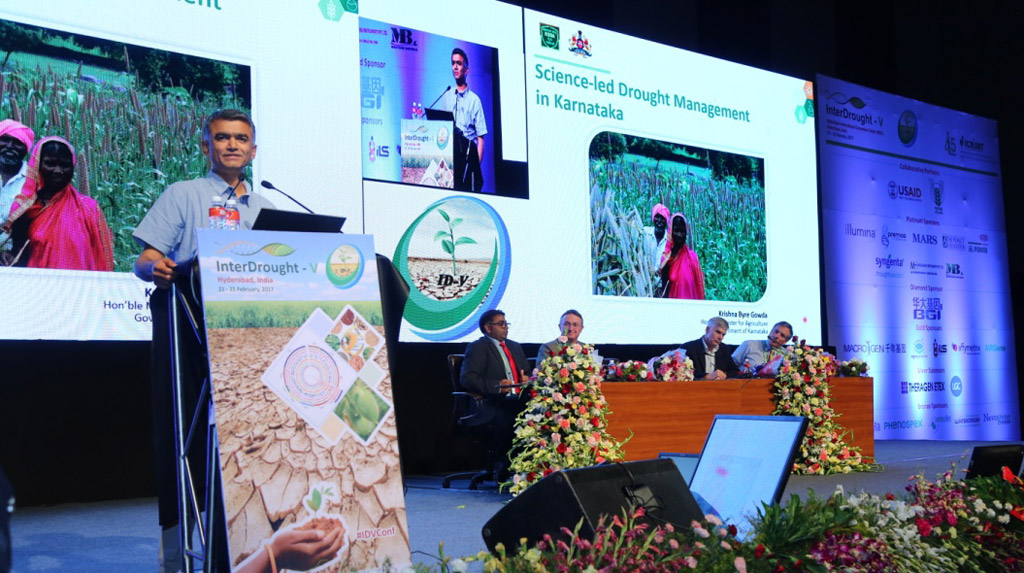 Hyderabad, India (25 February 2017) ― Harnessing modern tools is critical to help farmers overcome the devastating effects of drought. This was the key message from Sri Krishna Byre Gowda, Minister of Agriculture, Government of Karnataka at the InterDrought-V conference held in Hyderabad, India.

Every year, drought related disasters affect vast regions that impact food production. The most immediate consequence is a drop in crop production due to inadequate and poorly distributed rainfall.

“Given the severity of drought, a central challenge for researchers and policy makers is to devise technologies that lend greater resilience to agricultural production under this stress. Therefore 942 participants from 315 organizations from 56 countries assembled here to address this important issue,” said Rajeev Varshney, the Conference Organization Chair and Research Program Director, International Crops Research Institute for the Semi-Arid Tropics (ICRISAT).

“By using a holistic approach, organizations like ICRISAT need to work together and contribute to this important international food production constraint to feed the world. Prime Minister Modi has laid before us the challenge to double the income of farmers. It will be essential to enhance crop production and link farmers to markets,” said Dr David Bergvinson, Director General, ICRISAT.

“Farmers need to be placed at the centre of research and developing activities related to drought so that they can have more produce and better incomes,” said Sri S Pattanayak, Secretary, Ministry of Agriculture and Farmers Welfare, Government of India.

Dr Francois Tardieu, Research Director, INRA-Montpellier and Chair, InterDrought V, highlighted that this conference is in continuation of earlier InterDrought Conferences held in France (ID-I, 1995), Italy (ID-II, 2005), China (ID-III, 2009) and Australia (ID-IV, 2013), and invited all participants to the next conference in 2021.

He further added that from one year to the next, weather variability was identified as the critical risk to farming. This needs urgent solutions, and the conference served as an important call to action.

The chief guest for the closing session, Sri Krishna Byre Gowda, Minister of Agriculture, Government of Karnataka, India, thanked ICRISAT for hosting the conference. He stressed that he is heartened by the community of scientists collaborating on one of the most important issues affecting farmers — with agriculture in India being dependent on the ‘wager of monsoons’.

He told the audience that 160 of 176 blocks in Karnataka were currently declared as drought-affected. He looked forward to technologies and solutions to be developed by scientists to tackle the problems faced by farmers due to greater variability.

InterDrought-V conference was held in Hyderabad from 21-25 February, 2017. The conference had 23 invited, 26 contributory presentations across 8 sessions. In addition, 55 presentations were delivered in 8 workshops. Young scientists from developing countries interacted with eminent scientists and policy-makers during the event.