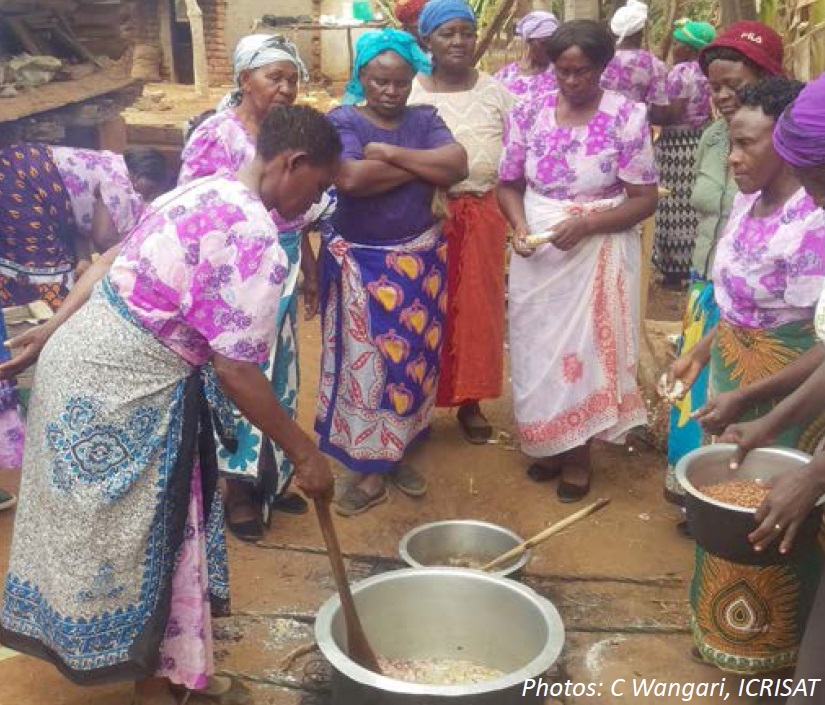 In Makueni, a county in Kenya, researchers in the Sorghum for Multiple Uses (SMU) project are working to improve production, profitability and utilization of sorghum. This intervention is important given that the maize crop in this area has failed due to unreliable rainfall, changing weather patterns and maize diseases.

“The quantity and frequency of rains is not enough to sustain growth of a maize crop to maturity in Makueni county,” says Mr Nehemiah Mburu, a researcher from Africa Harvest which is a key SMU project implementing partner. The county was selected as a beneficiary for the project interventions as it is characterized by water scarcity, low food production and low resilience to climate change, which have led to increased food insecurity, poor nutrition and poverty.

The SMU program is designed to support farmers in the dry areas to grow sorghum varieties that are suitable for their environment and desired end uses. The project strives to enhance farmers’ access to improved, high-yielding, drought-tolerant sorghum varieties, using various entry points including aggregators and local seed merchants. In addition to this, farmers are trained on how to use these improved varieties using demonstration plots where good agronomic practices are imparted as a catalyst for improvements in quality and quantity of produce at the farm level.

The team is working on promoting diversified use of sorghum-based products for food and feed in Kenya. “The guiding strategy in diversifying use of sorghum in food and feed is anchored on market needs. We have identified and are working with animal feed manufacturers to align their input requirements with production activities in terms of quality and other attributes. We are also training households on preparation of nutritious sorghum-based meals that are palatable and accepted at the community level,” adds Nehemiah.

To create a demand pull for sorghum, the team is promoting diversified use of sorghum-based products for food, feed and other industry uses including malting. Sorghum is a traditional crop that was replaced by maize for two generations, and therefore the new generation does not know how to grow or use it. It has therefore become necessary to re-introduce it to the community.

Mbukilye Ngukilye is one of the women groups in Makueni county that was identified and brought on board as a project beneficiary. “They have been trained on production, post-harvest management, utilization and value addition and linked to end-user markets through an aggregator working in the area,” says Ms Doreen Marangu, project manager, Africa Harvest.

Home economics specialists from the Ministry of Agriculture help with the training of trainers who then work with local women groups to demonstrate different ways of cooking a variety of sorghum dishes.

“The group is planning to move to the next level of commercial production of sorghum-based products to increase their incomes,” Doreen adds. Mr Kyalo uses the sorghum to feed his family, his fish and the surplus is then sold in the market. Photo: C Wangari, ICRISAT

Forty eight-year-old Mr Benson Kyalo Mwengi is one of the early adopters of sorghum innovations introduced by the project team. He has invested largely in sorghum farming and he uses irrigation during off seasons. He still prefers sorghum farming to growing maize. “Sorghum requires less water than maize,” he explained.

“Mr Kyalo was identified as a potential initial adopter of the technologies the project is promoting. He agreed to set aside an acre of his land to be used as a demonstration plot and for participatory selection of SMU varieties and hybrids from where other farmers within the area could get to know about the technologies, learn and hopefully adopt on their individual farms. The arrangement worked well and he has embraced sorghum farming,” Doreen explained.

Mr Kyalo uses the sorghum to feed his family, his fish and the surplus is then sold in the market. He says that he got the idea of using sorghum for fish feed from his interaction with the SMU team. He then sought advice from the Ministry of Livestock and Fisheries on how to produce the fish feed by substituting maize or rice bran with sorghum. “Maize and rice bran is not easily available and is too expensive for us,” he says.