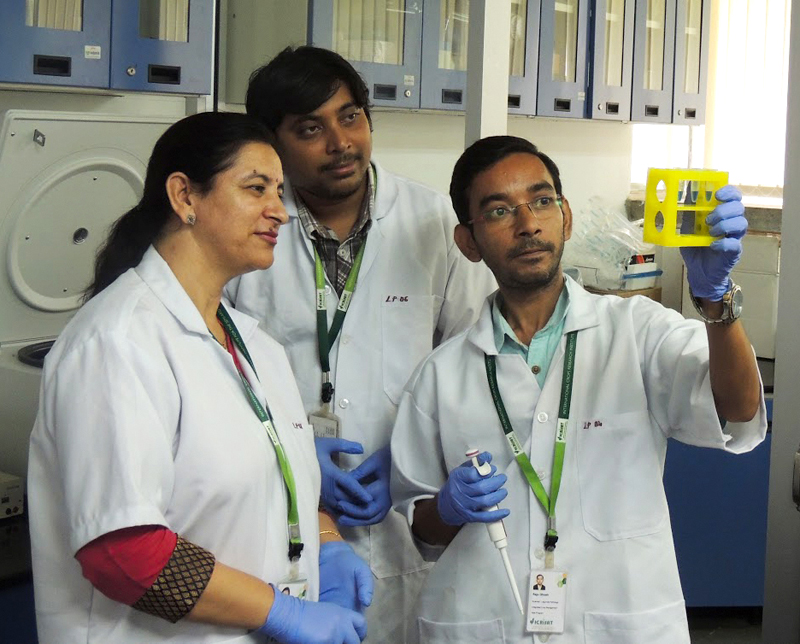 Chickpea is a lifeline food crop for India’s national food security. This protein-rich pulse is important for any Indian household’s diet, especially the poorest. With an annual production of over 7 million tons, India accounts for about three-quarters of world’s chickpea production. Over the past 5-10 years, with rising temperatures and a shift of chickpea cultivation from cool Northern India to semi-arid central and southern states like Andhra Pradesh, farmers have witnessed the rise of a deadly soil-borne disease, dry root rot (DRR), which can wipe out all their crop.

This soil-borne disease is caused by the fungus Rhizoctonia bataticola (Synm Macrophomina phaseolina), which thrives in crops exposed to soil moisture stress with temperatures over 30 C during the flowering to pod-filling stages. The plant dries suddenly and its leaves become straw colored. The problem is that several important diseases like Fusarium wilt have similar symptoms and DRR cannot be distinguished easily at the field level. At present, only laboratory methods are available to detect DRR with certainty: for instance, the commonly used polymerase chain reaction (PCR) techniques require specialized and expensive equipment. Farmers and agronomists feel helpless to assess the scope of this threat and design a proper pest management strategy.

Plant health experts from the International Crops Research Institute for the Semi-Arid Tropics (ICRISAT) have developed a fast, visual and user-friendly plant disease diagnosis device that is ten times cheaper than existing PCR methods. This test can quickly identify an emerging root pathogen that affects chickpea and over 500 other crops globally, including nutritionally and commercially significant crops such as soybean, maize, sunflower, groundnut, pigeonpea, jute, and sorghum.

This pathogen is soil borne and can remain in soil even after several crop cycles. It is emerging as a major threat in central and southern India (major chickpea-growing regions), with disease incidence ranging from 5% up to half the area in badly affected regions. DRR can destroy all of a farmer’s crop in favorable conditions, but fungicide treatments are underdeveloped and expensive, making ‘on-farm management’ using timely irrigation techniques, early sowing times, and early maturing crops the only major remedies available to farmers.

With the LAMP technique, infection can be detected with the naked eye. Once DNA is extracted from a suspected plant or soil sample, it is put into a small tube containing a specific enzyme mix and indicator reagent SYBR green or HNB. After being exposed to a temperature of 63°C for 60-75 minutes, the color of the mixture in the tube changes from yellow to orange or dark blue to sky blue only if the pathogen R. bataticola is present.

The LAMP method is ten times cheaper than the lab test (70 cents per sample as opposed to a PCR reaction costing US$ 5-7). It does not require advanced skills unlike in existing methods, apart from DNA extraction. Highly sensitive, the test only needs a minimum DNA concentration of 10 fg, thus requiring little more than basic knowhow of DNA extraction. In addition, the reagents used are eco-friendly and non-mutagenic, making their use safe for both humans and livestock. Therefore, the LAMP technique can be used in remote places. ICRISAT scientists suggest developing portable LAMP toolkits for district-level farm extension centers, or Krishi Vigyan Kendras (KVKs), so that farmers can quickly access advice on proper pest management to combat DRR. And while the study was conducted mainly on DRR in chickpea, LAMP can be applied broadly for a large number of other important crops affected by this fungal pathogen.

Adoption of this affordable user-friendly test by farmers and local extension workers may prove crucial to combat this rampant plant killer. Efforts to scale up the use of this test and develop easy-to-use toolkits, along with basic training for extension workers can help prevent crop losses and ensure food security for millions worldwide.

The research was conducted under the CRP-Grain Legumes program at the International Crops Research Institute for the Semi-Arid Tropics (ICRISAT) by Mamta Sharma, Raju Ghosh and Avijit Tarafdar and funded by the Department of Science and Technology (DST)-Climate Change Division, Government of India, and the Science and Engineering Board (SERB), Government of India.

The plant dries suddenly and its leaves become straw colored.