14
Feb
USAID delegation visited Mali to see impacts from projects undertaken by three CGIAR institutions A recent study revealed that sorghum and millet yields increased up to 51% and 72% respectively during the period 2014-2019 in Mali. This was achieved by... Read More

14
Feb
A Seed Revolving Fund initiative for sorghum and groundnut value chains has been launched in Tanzania to tackle the challenge of limited access of quality seeds of improved varieties in rural regions. The ‘Seed Revolving Fund, Youth Engagement and Gender... Read More

14
Feb
Earlier this year, Cyclone Idai swept across Mozambique. Its powerful winds and heavy rains led to massive floods, hundreds of deaths, and the large-scale destruction of crops and property. An estimated 140,000 people were displaced, and six months later, nearly one million people, including 160,000 children under five, are still facing food shortages and a nutrition crisis...

07
Feb
Like many other agriculture policy enthusiasts, I too had made my wish list expecting specific announcements in the Union Budget 2020-21. I even shared my thoughts in the social media, much to a broad acceptance of friends following me...

31
Jan
ICRISAT’s soil laboratory has recently been accredited by the FAO Global Soil Laboratory Network (GLOSOLAN), becoming only the second lab in India to achieve this distinction. The laboratory can now serve as a focal point for all soil laboratories in... Read More

31
Jan
Training programs on silage making, animal health and laboratory management were held in Niger for researchers, extension service workers and farmers to improve crop-livestock systems in the region. Silage making to improve utilization of stover A study conducted in Maradi... Read More

24
Jan
Around a hundred scientists from varied disciplines, who gathered to discuss an India-UK joint research program, called for more interdisciplinary research to make Indian agriculture sustainable in a changing world and to ensure food security. The first General Assembly of... Read More

24
Jan
An innovative technology that bridges digital approaches and physical interventions on farms and offers last-mile breakthrough capabilities in reaching every single project farmer with climate solutions has impressed the top leadership in Nigeria. The innovation program – agCelerant – is... Read More

24
Jan
Have you heard of ‘pop’ sorghum or ‘diet’ sorghum flour?  If you haven’t, you are missing updates on an ancient grain that is gaining popularity in Nigerian markets and in nearby regions as well. Industries with guidance from researchers have... Read More

17
Jan
Two new groundnut varieties with more than 78% oleic acid have captured the attention of the Indian groundnut industry which is keen on marketing ‘healthier’ oil to consumers in the next 2-3 years....

17
Jan
The facilities aim to create sustainable business opportunities around nutritious diets for tribal farmers in Telangana In a bid to boost nutrition and income, farmers from tribal communities in the South Indian state of Telangana will shortly take to ‘agripreneurship’... Read More

10
Jan
If school children in Uganda have taken to a super-nutritious traditional fermented millet drink called bushera and if an India-inspired peanut bar is a popular item in Zambian supermarkets, a training initiative in partnership with the India-Africa Forum Summit deserves... Read More

10
Jan
Access to quality seed remains a big challenge for farmers in Africa. With increasing drought situations and deteriorating soil quality, especially in the Sudanian and Sahelian zones, improving access to seed of climate-smart varieties is part of the solution. Spurred... Read More

10
Jan
There are two compelling reasons for this shift. First, urban dwellers in Africa often have higher rates of malnutrition than their rural counterparts and, second, urban centres are large consumers of food produced in rural areas and in the process are altering the producing areas, sometimes beyond recognition...

10
Jan
Climate change is one of the most extreme challenges Indian agriculture is facing today and will have to deal with in future. There have been overwhelming and growing scientific evidences to establish that the world is getting warmer due to climate change and such increasing weather variabilities and worsening extremes will impact the agriculture sector more and more adversely...

10
Jan
If you’re trying to win the trust of a community, you don’t start by building rat houses on their land. But that’s just what some residents living on Ethiopia’s Yewol mountain worried scientists were doing. They saw the slow construction of stone-pile terraces along their mountainside. And they were suspicious...

03
Jan
Superfoods” is a catchword that has found popularity among the most health-conscious consumers. However, the concept of these nutritionally dense and healthy foods only focuses on one aspect of the complex global food system. With experts increasingly raising the alarm... 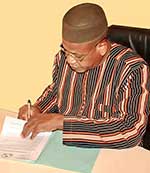 Dr Paco Sereme, Chair, ICRISAT Governing Board, was appointed Chair of the National Academy of Sciences, Arts and Letters of Burkina Faso. He was appointed on 16 December 2019 in Ouagadougou, Burkina Faso, and will be serving an initial term of three years. The academy has five colleges, one each for human and animal health sciences; natural and agricultural sciences; science and technology; social sciences, humanities, culture and art; legal, political, economic and management sciences.

New members of ICRISAT Governing Board

Dr Yilma Kebede brings several years of experience in crop improvement research and project management to the board. He was an ICRISAT Honorary Fellow, appointed in 2017. Dr Kebede has been actively involved in finding sustainable solutions for climate-related issues in Africa and other regions while at the Bill & Melinda Gates Foundation and in the private sector.

ICRISAT looks forward to working closely with the new members during their tenure.