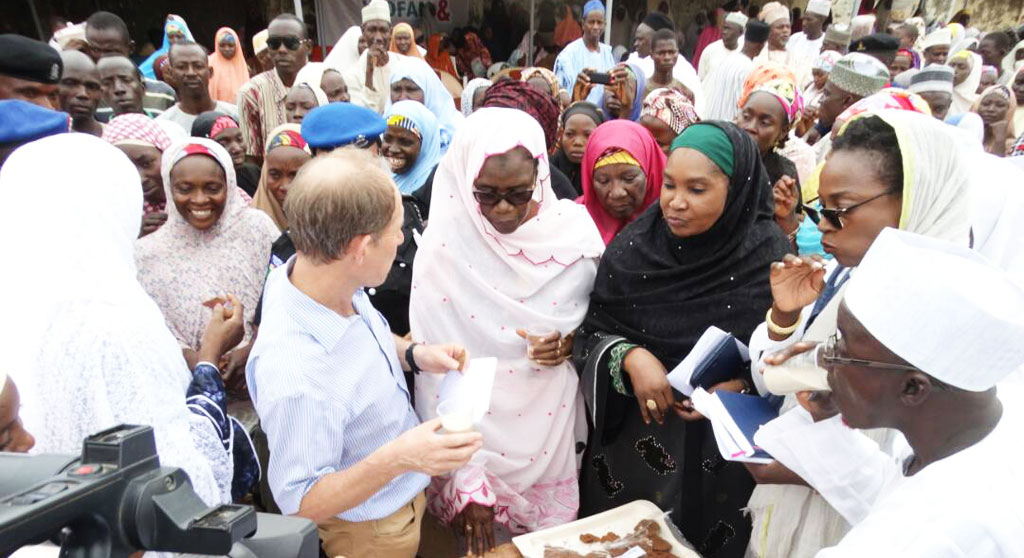 ICRISAT has partnered with the Catholic Relief Services (CRS) and Women Farmers Advancement Network (WOFAN) in the launching of a ‘Cook’s Guide’ on groundnut.

The Cook’s Guide comprises 16 different ways of incorporating groundnut into local diets and highlights the nutritional and health benefits of consuming each product.

Groundnut, a smart food, provides energy and essential nutrients such as protein, phosphorous, thiamin and niacin, key to fighting the scourge of hidden hunger.

Over 80% (2.2 out of 2.5 million) of the severely malnourished children in Nigeria are in the northern region. Considering that Nigeria is home to the highest number of stunted children on the African continent and ranks third globally with more than 10 million stunted children, this Guide is a handy reference source to address the challenges of malnutrition.

Endorsing the Guide, Dr Hakeem Ajeigbe, Country Representative of ICRISAT, Nigeria said, “The Guide is another icon of the commitment of ICRISAT in supporting national partners in the process of reconstructing the lost groundnut pyramids of northern Nigeria.” He urged the Women in Agriculture (WIA) teams of the Agricultural Development Programs (ADPs) to use the Guide as a hands-on reference material while performing their duties.

The launching ceremonies of the Guide brought together 800 participants from 30 organizations including key State Ministries – Women and Social Development, Secondary Education, Primary Education, Agriculture and local Government as well as civil society organizations.

Over a period of three months, the launching took place in four out of the five states covered by the Project — Katsina state (July), Sokoto and Kebbi States (August), and Kano State (September).

These launching programs align well with the project’s continuous awareness raising campaigns on the consumption of aflatoxin-free (healthier) groundnut and groundnut-based products. UNICEF and several state-based media agencies were also represented during each of the programs. Reacting to the press after the launch in Katsina state, Mrs Haijya Binta Masri, wife of the State’s Governor pointed out that the Cook’s Guide will certainly boost the engagement of women in groundnut production as they are actively engaged in processing groundnut into a range of other products. She promised to pursue this with the state ADP to enhance the production and enable women to have adequate quantities of groundnut for processing.

“I did not know that groundnut could produce so many different food items as outlined in the Guide,” commented Mrs Hajiya Hassana Wara, the Permanent Secretary in the Kebbi Ministry of Women’s Affairs and Social Development, while launching the Guide in Kebbi State. Before committing her Ministry to follow-up actions, she urged those at the ceremony to try out at least one of the items described in the Guide upon return home.

According to Mr Abdullahi Nasiru, Desk Officer of the Project at the Kebbi State ADP, “the Guide is another valuable action of the USAID project.”