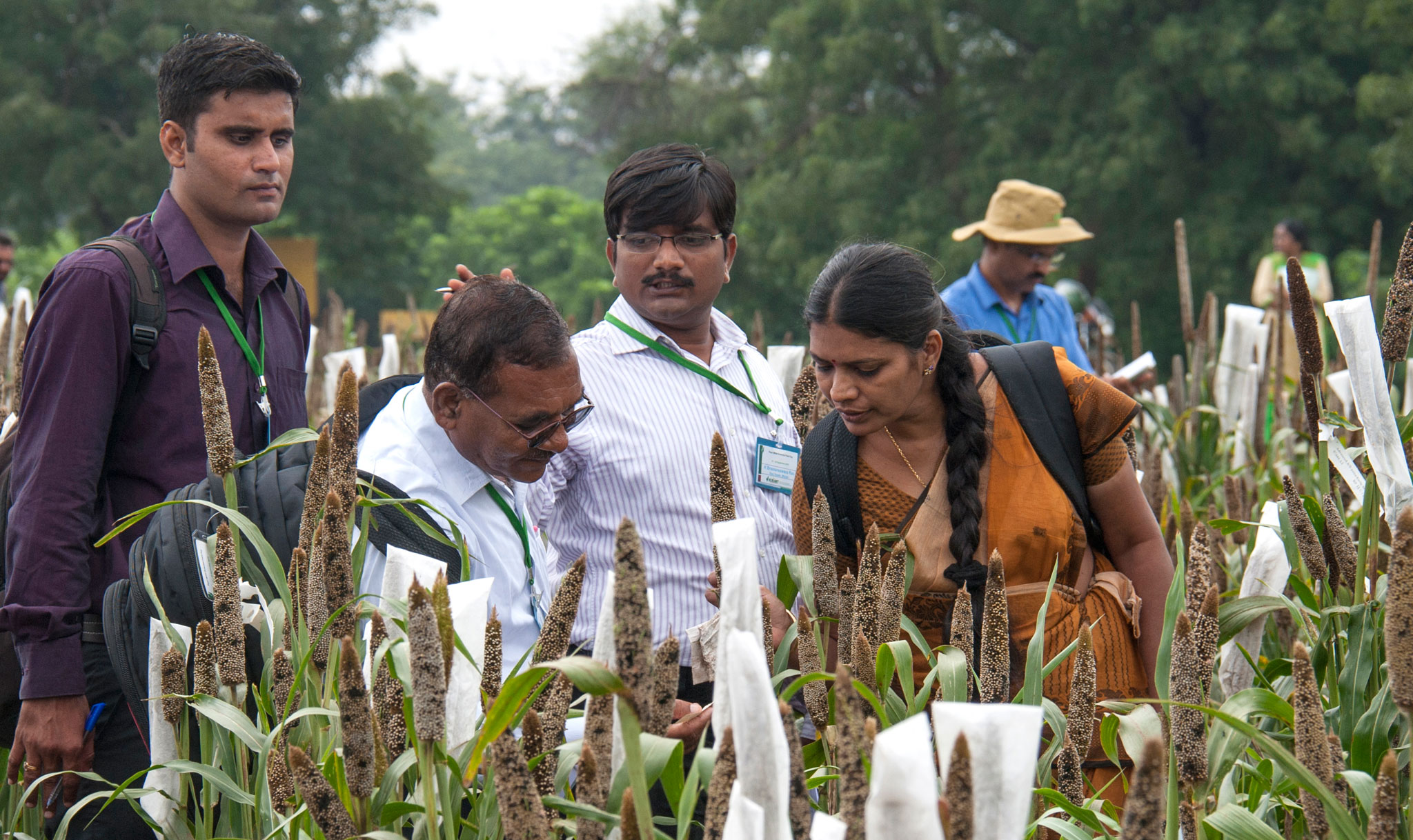 The need for breeding blast-resistant pearl millet varieties was strongly voiced by breeders from seed companies, who attended a field day held at ICRISAT headquarters recently.

Pearl millet blast, caused by Pyricularia grisea, has emerged as a serious disease of pearl millet hybrids in India in the past 7-8 years. Host plant resistance is the most economical and viable disease management strategy to control the disease. However, resistance in the commercial hybrids being grown in India is not available as no efforts were made in the past to breed for blast resistance.

The need for machine-harvestable pearl millet cultivars was also raised by the visiting scientists from both the public and private sector, whose primary objective was to select breeding materials and parental lines of potential hybrids for their programs. They reviewed a diverse range of materials dealing with –

The participating scientists selected 5,786 breeding plots of which 1,194 were unique seed parents and 1,513 unique restorer parents. The most sought-after traits in pearl millet were – thicker and longer panicle with compactness and heat tolerance.

The forage-type breeding material developed by ICRSIAT was appreciated and special mention was made by Dr PK Ghosh, Director, Indian Grassland and Fodder Research Institute (IGFRI), Jhansi, India. The newly-developed open pollinated varieties (OPVs) and hybrids have a high green biomass potential of 50-60 tons per hectare compared to the normal output of 15-20 tons per hectare in India.

Participants also felt that there is need to strengthen the restorer development for the more stable A4 and A5 Cytoplasmic Male Sterility (CMS) systems.

The participants gave their feedback on the potential usefulness of the materials they saw and provided critical inputs to further strengthen ICRISAT’s pearl millet crop improvement program.

Participants were also oriented on new tools and technologies that were developed or refined at ICRISAT, this included –

The field day was attended by 29 participants from the public sector and 46 from the private sector, who are members of the Pearl Millet Hybrid Parents Research Consortium (PMHPRC), including two scientists from a Brazilian seed company. ICRISAT scientists from Eastern and Southern Africa; and West and Central Africa regions participated in the event and selected hybrid parents of their choice to strengthen hybrid pearl millet program in their regions.

The field day held on 27 and 28 September was organized by the Asia Program – Crop Improvement (Pearl Millet Breeding).