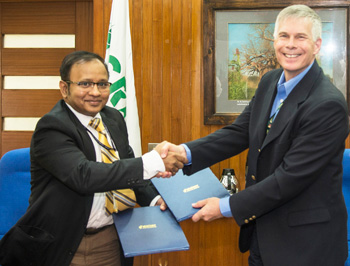 Environment Protection Training and Research Institute (EPTRI) and ICRISAT have agreed to work together for research and capacity development in the field of climate change adaptation and mitigation in agriculture. A Memorandum of Understanding (MoU) to this effect was signed during the visit of Mr Kalyan Chakravarthi, Director General, EPTRI, to ICRISAT on 26 November.

During a meeting with ICRISAT directors and scientific staff, Mr Chakravarthi said that EPTRI has a mandate to prepare the Telangana state action plan for climate change in all the sectors. As agriculture is the most vulnerable sector, he said EPTRI is committed to conducting pioneering research and scaling up proven climate smart agricultural strategies towards building resilience of smallholder farmers to climate risk.

EPTRI, based in Hyderabad, has been appointed by the Telangana state government as a nodal agency for Climate Change and Clean Development Mechanism (CDM).