Nitrogen-efficient crops on the horizon: Can we grow more with fewer emissions? – ICRISAT 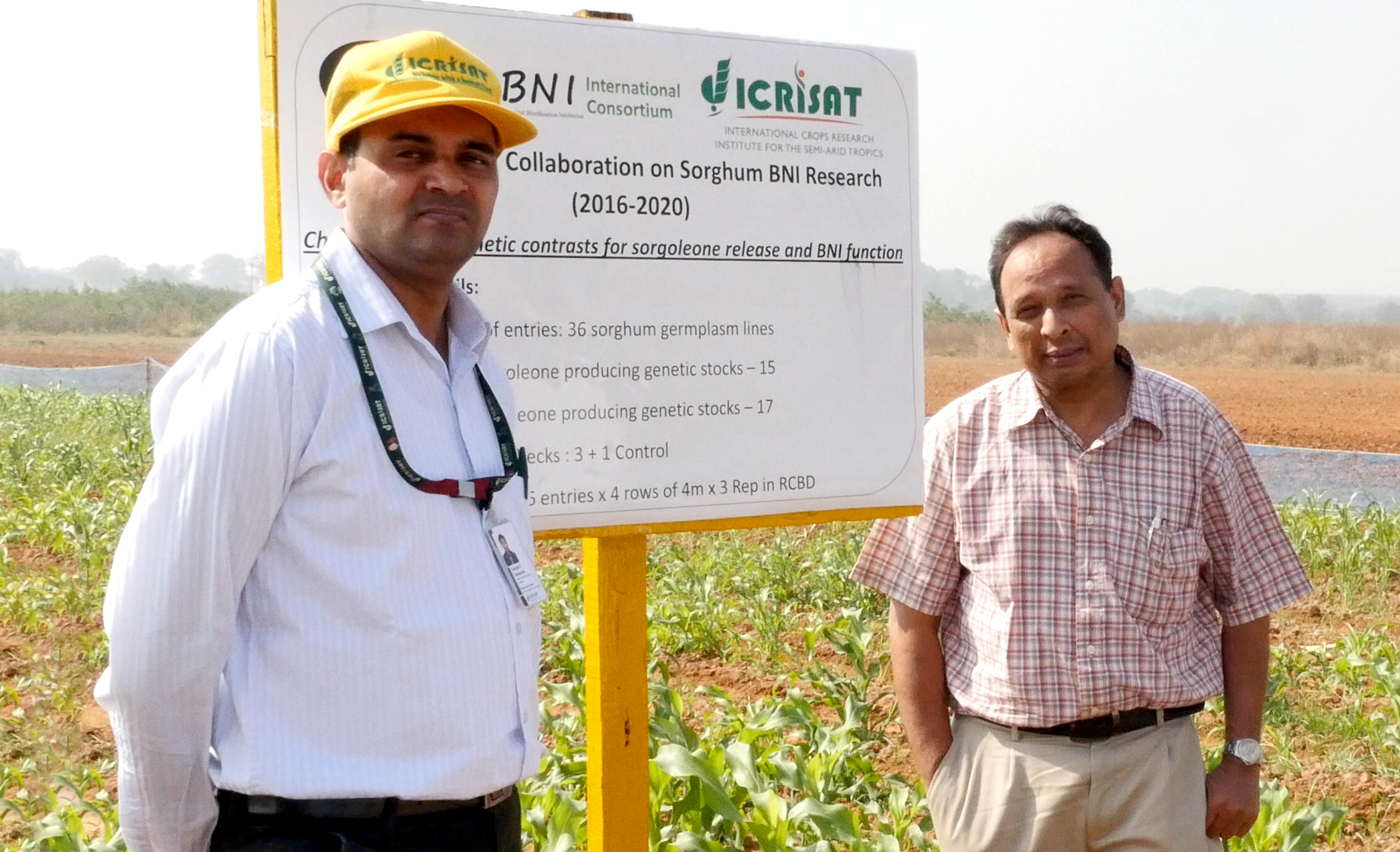 A group of scientists from the Biological nitrification inhibition (BNI) Research Consortium, of which the International Crops Research Institute for the Semi-Arid Tropics (ICRISAT) is an active member, believes that science now offers an option to boost crop productivity, dramatically reduce greenhouse gas emissions and provide an affordable alternative to farmers’ heavy use of nitrogen fertilizers, highlights the author of a report that appeared this week in the journal Plant Science.

The new study describes certain plants that possess a trait known as BNI, by which they suppress the loss of nitrogen (N) from the soil and improve the efficiency of its uptake and use by themselves and other plants.  The authors, who form part of a new BNI research consortium, propose transferring the BNI trait from those plants to critical food and feed crops, such as wheat, sorghum and Brachiaria range grasses.

“Nearly a fifth of the world’s fertilizer, for example, is deployed each year to grow wheat and the crop only uses about 30 percent of the nitrogen applied,” according to Guntur Subbarao, a researcher with Japan’s International Research Center for Agricultural Sciences (JIRCAS) and lead author of the study.

“If BNI research is successful, it could turn wheat, the world’s most widely-grown food crop, into a super nitrogen-efficient crop,” he explained. “Farmers would spend far less on fertilizer and nitrous oxide emissions from wheat farming could be reduced by as much as 30 percent.”

Work on BNI-enabled sorghum is also underway at ICRISAT. While sorghum is grown for feed (mostly in the developed world) and food-fodder (in most of Sub-Saharan Africa and South Asia), the technological intervention of BNI technology for improved nitrogen use efficiency has a direct bearing on food-fodder-feed security for millions of households in these regions.

Excluding changes in land use such as deforestation, annual greenhouse gas emissions from agriculture each year are equivalent to as much as 5.8 billion tons of carbon dioxide (CO2), or 11 percent of the total emissions from human activity (Smith et al. 2014).

Nitrogen fertilizers are a major source of agricultural emissions. About 70 percent of N applied to crops in fertilizers is either washed away or flushed into the air as nitrous oxide (N2O), a greenhouse gas 300 times more potent than CO2.

“The most widely grown crop on the planet, wheat is a major nitrogen user and N2O emitter,” says Hans Braun, director of the global wheat program at the International Maize and Wheat Improvement Center (CIMMYT). “BNI technology is one of several options we’re pursuing to reduce nitrogen losses from wheat farming, but more funding is needed.”

The grasses can be eaten by cattle, while reducing N20 emissions and improving soil fertility for other crops grown in rotation on the same land, according to Michael Peters, leader of the tropical forages program at the International Center for Tropical Agriculture (CIAT).

“It may be counter-intuitive to many, but growing BNI Brachiaria to feed cattle can actually help reduce greenhouse gas emissions from livestock production,” says Peters, adding that unlocking BNI capacity in other crops would help reduce nitrogen fertilizer use across the board, benefitting farmers and the environment at large.

But scientists at CIMMYT and ICRISAT say that BNI-enabled food crops will be a few years in coming, because it is difficult and costly to transfer the genetically-complex BNI trait into elite crop varieties while preserving high yield potential and other desirable qualities.

Subbarao and others are calling for major research investments to have high BNI food and forage crops grown widely across the globe by 2050 and thus help to meet the goal of limiting global temperature increases to 2 degrees Celsius above pre-industrial levels.

“Dramatically reducing nitrous oxide emissions from agriculture requires a complex, integrated approach that includes more precisely calculating and applying fertilizer doses,” Subbarao says. “But the beauty of BNI technology is that it works with and reinforces biological processes, and all you’ll need to do is sow a seed.”

“Feeding a global population projected to exceed 9 billion by 2050 will place a tremendous strain on agri-food systems and the environment,”says Iwanaga. “At the same time, agriculture is not merely a commodity-producing industry, but part of a larger ecosystem that offers life support and services to human society.”