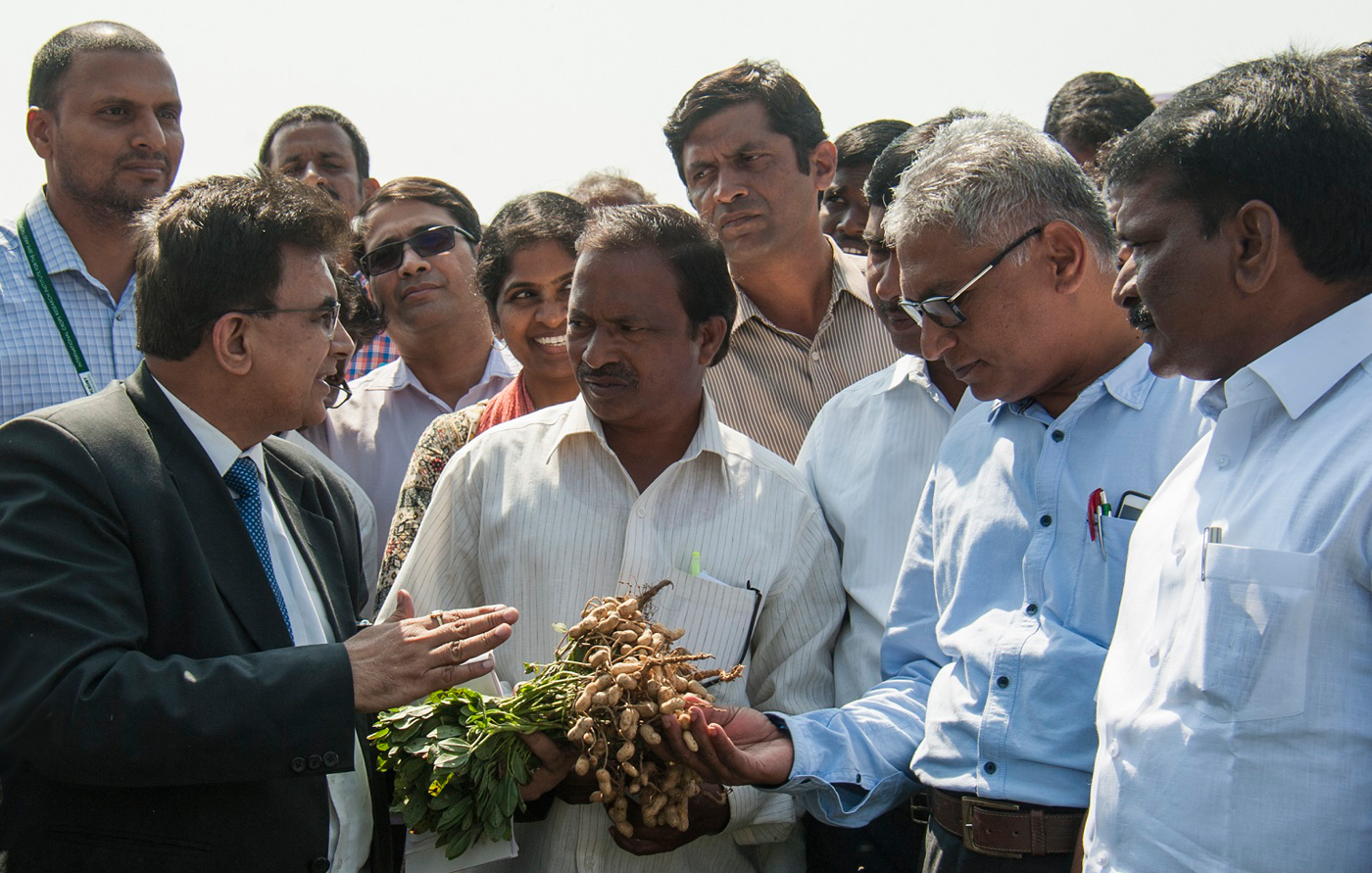 “I’m very pleased with new groundnut variety ICGV 03043 because its seed rate is low, it requires less fertilizer and pesticides, and takes less time to weed compared to K6, the variety I normally cultivate. Threshing is also a lot easier because of its thin stem,” says Mr Narasimha Reddy, groundnut farmer from Sri Rangapur village of Wanaparthy district, a 2-hour drive from Hyderabad in Telangana State.

Holding aloft a healthy groundnut plant with 30 pods, Mr Reddy is describing to 200 fellow farmers from the district at a farmer demonstration day on 20th January 2018, what he likes best about ICGV 03043, an oil-rich groundnut variety developed and released in a partnership between ICRISAT and ICAR-Directorate of Groundnut Research and Junagadh Agricultural University, Gujarat under a project supported by the National Mission on Oilseeds and Oil Palm, Government of India.

Since 2011, groundnut breeder Dr P Janila and her team have embarked on a journey to develop at a faster rate, varieties that can perform well in farmers’ fields in terms of yield and disease resistance, and respond to specific market needs, selecting traits like high oleic acid content and richness in oil.

A variety that grows well, and sells well

Yellow and green. The contrast is striking between the lush green sandy field of ICGV 03043 and the yellow patch of K6, the locally popular groundnut variety.  K6 which has been cultivated for more than 15 years in Wanaparthy, was severely hit by leaf spot this year.

ICGV 03043 performs much better than best local varieties as it resists leaf spot disease (tikka) and pests like Spodoptera moth as the small and narrow leaves are a deterrent for the moth to lay eggs.  Its evergreen foliage is also a good source of quality fodder. Excess rain after planting this year damaged the K6 crop, and farmers expect no more than half the normal production, around half a ton per acre. ICGV 03043 is more climate resilient as higher pegging (up to 40 against 15) and a slightly longer growing cycle (140 days against 120 days in the post-rainy season) means it has higher chances of recovery.

Groundnut variety ICGV 03043 has the highest oil content of 53% among cultivars grown in India. Normal varieties have about 48%, and farmers get a higher price with every additional 1% of oil in the produce.

Dr SK Malhotra, Agriculture Commissioner at the Department of Agriculture, Cooperation and Farmers Welfare, Government of India, one of the funders, explains why such a new variety is important for Telangana farmers and for India. “Every year, India imports massive quantities of oil, about 15 million tons. We need to increase our domestic oilseeds production, in particular groundnut oil which is a healthy all-purpose oil for cooking. Telangana farmers are innovative and eager to adopt new technologies that fit their farming conditions and improve their incomes. ICGV 03043 has great potential as it is very productive even under low-input conditions and responds to specific market needs.”\ Mr Swamy, another farmer who has been growing ICGV 03043 since last year, warns of the younger generation’s alienation from agriculture if they don’t see profitability, and while groundnut is an important crop for their region, local varieties give neither bumper harvests nor good prices at the market. He was pleased with the yield of the new variety and its resilience to pests. “Its richness in oil will help us get better prices. And since it requires minimum inputs, it may be interesting to go for organic cultivation, as I may get better prices for organic groundnut.”

This led to an animated conversation between farmers and the project team about how ICGV 03043 seeds could be supplied quicker to farmers. Even though it has a 20% lower seed rate than the local check, farmers still need about 150 kg of seeds per hectare. A centralised seed system would not make sense due to prohibitive logistical costs, so it was recommended that farmers keep a share of their harvest as their own seeds at home for the next growing season. Low-cost air-tight triple layer storage bags to keep seeds safe from pests may be of great interest for this purpose.

Alongside demand-driven breeding and extension efforts to ensure groundnut farm production increases, farmers, researchers and agriculture officials need to work hand in hand to create a market environment for farmers to reap benefits after harvest. “Adding value to your groundnut production has to be a continuous process. We have to first look at the low hanging fruit, grading, and make sure the crop is aflatoxin free. That is your first step for better profitability. Then you’ll benefit also from ICGV 03043’s superior oil content,” explains Dr Venkat Ramana, Associate Director of Research from Professor Jayashankar Telangana State Agricultural University (PJTSAU), Hyderabad.

However, farmers in the district usually market their own produce and several complained about not getting remunerating prices. An initiative for the collective marketing of groundnuts that are graded and certified aflatoxin-free would be of great interest to the food industry, and it would fetch farmers much better prices as well.

Farmers from Wanaparthy district have a comparative advantage. There is low incidence of aflatoxin since groundnut is grown in the post-rainy season in light sandy soils, under irrigation, and harvested in the dry season, ensuring proper drying of pods. ICRISAT plant pathologist Dr. Hari Sudini recently tested local groundnut samples which showed that the occurrence of this harmful fungal toxin was nil or under permissible limits. “Groundnut quality is crucial for the market and such low incidence of aflatoxin will increase farmers’ bargaining power,” he says.

With better linkages to groundnut markets and seeds that fit industry needs, there is no doubt that Narasimha and his fellow villagers will soon reap benefits with this new oil-rich groundnut.