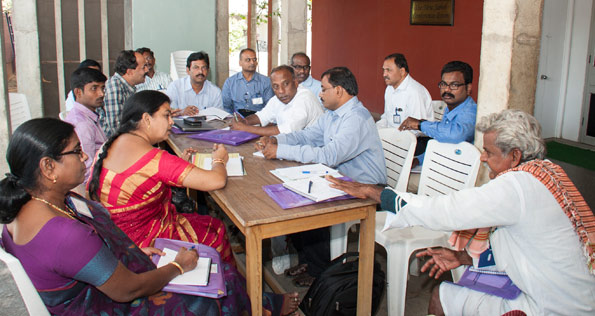 For increasing the contribution of the horticulture sector to the Primary Sector Mission in Andhra Pradesh, India, government officials, scientists and farmers came together to chalk out action plans for the rabi (postrainy) season.

Participants were divided into four groups to brainstorm the following:

The production technology team discussed and made recommendations on promotion of crop varieties suitable for export as well as for processing, action plans on how to control pest and diseases for different crops, mechanized tools and implements for farm operations, minimizing losses during post-harvest, marketing and value addition to get higher profits.

The shade net and polyhouse team requested the government to consider polyhouse farmers on par with agricultural farmers and fix power tariffs in line with the agricultural category. Farmers also requested the government to extend 75% assistance to polyhouse farmers as against the current assistance of 50%. Other recommendations included exposure visits to progressive farmers’ plots to learn best production practices, value addition, packing and exports, provision of insurance for self-financed polyhouse owners. The micro-irrigation team discussed and made recommendations on the finances required for making the existing micro-irrigation system functional. The team provided detailed cost of components and a survey format was prepared accordingly. Also issues pertaining to non-functioning of filters, non-utilization of fertigation unit, leakage of control valves and Head Control Units, and capacity building were discussed by the team. Fertigation scheduling for major crops was discussed and recommendations to start demonstration in farmers’ fields in villages were made.

The FPO team’s recommendations included formulating new policies and guidelines for FPO promotion. Recommendations were also made to improve the capacity building of FPOs, exposure visits and training programs for new FPOs, publicity and promotion support for all FPOs and provision of a one-time assistance from the government. On the final day of the workshop, seminars on different horticulture crops were presented by scientists from Indian Institute of Horticultural Research (IIHR), Dr YSR Horticultural University, Agricultural and Processed Food Products Export Development Authority (APEDA) and various other institutes. The workshop ended with each district official presenting the action plan for their respective district.

The workshop, held from 13-14 November is part of the Rythu Kosam (Primary Sector Mission) initiative of the Government of Andhra Pradesh.  A total of 203 participants representing different sectors participated.