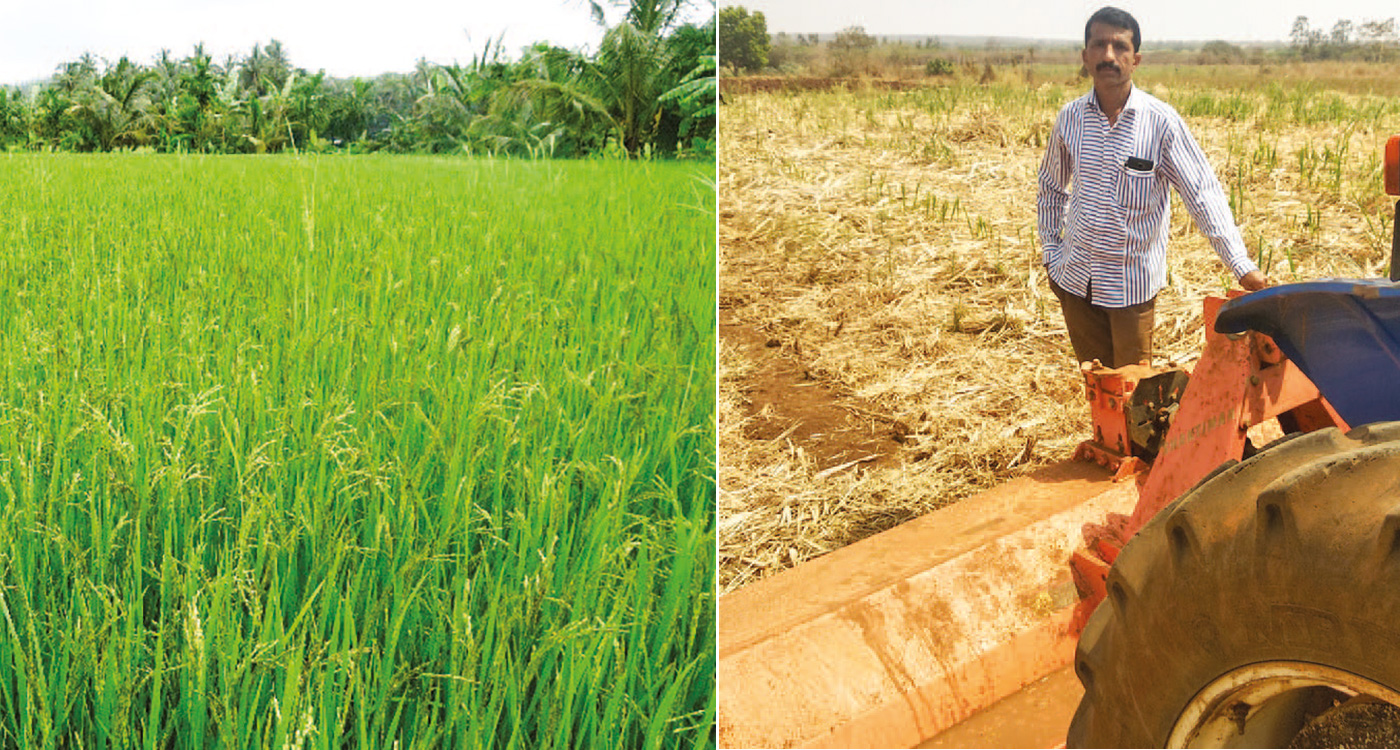 A package of climate-smart technologies implemented by a consortium of CGIAR centers has resulted in significant income gains and increased yields for farmers (see box). The impact of these technologies that save on water and improve soil organic content were shared during a review and planning meeting of the Bhoosamrudhi project for the 2019 rainy (kharif) season.

Micronutrient and crop residue application:
In Bidar district, the practice of post-harvest burning in sugarcane fields was replaced by a more eco-friendly intervention. A trash shredder was used to incorporate sugarcane residue into the soil which resulted in increased soil organic content of 700 kg/ha per annum. Farmers using the trash shredder also applied micronutrients as prescribed by scientists (borax 2 kg, zinc 5 kg and gypsum 100 kg for every 0.44 ha) and benefited with increased yields of 5 tons/ha from sugarcane. Using shredded stalks as mulch reduced fertilizer costs and improved moisture conservation in the soil.

Laser land levelling:
A total of 111 ha of land was laser levelled in Dharwad, Chikkaballapur and Bidar districts. The treatment ensures a flat table-top like surface which reduces runoff and improves moisture conservation.

Relay planters:
55 seeders fabricated by the International Maize and Wheat Research Centre (CIMMYT) facilitated raising a second crop such as maize, mustard, cowpea and chickpea through relay seeding in standing cotton. This has enabled farmers in the project to cultivate these crops as a buffer, for the cotton crop is susceptible to yield losses in the event of drought.

The Bhoosamrudhi project (2015-2020) was launched at the request of the Karnataka State Government to ICRISAT to lead a consortium of CGIAR institutions working in India and to operationalize impact-oriented research for development to improve rural livelihoods in four districts – Chikkaballapura, Udupi, Dharwad and Bidar. As part of the project, improved cultivars were introduced to benefit farmers and capacity building programs are being conducted on land management, integrated nutrient and pest management.

Mechanization: Dr ML Jat, Principal scientist and Systems Agronomist, CIMMYT, gave a presentation on various farm mechanization techniques and the use of multi-crop planter, laser leveling, relay planters and power tillers. He said that in Karnataka state, 4,035 ha had been laser leveled. A precisely leveled surface leads to uniform soil and moisture distribution resulting in good germination, enhanced input use efficiency and improved crop stand with an increased yield of about 30%. “About 95 laser units are owned by farmers (service windows) and the numbers are growing exponentially,” he said.

Dr Barun Deb Pal, Project Manager, International Food Policy Research Institute (IFPRI) spoke about the benefits of laser land levelling and DSR technology in paddy during a drought year. The findings showed that laser land levelling had the highest adoption rate in 2018 and farmers were slowly moving towards DSR in that drought-hit year. In 2018, there was a 55% adoption rate in laser land leveling. Speaking about the perception on climate variability, impact and adaptation techniques, he said that almost 65% of the farmers had reduced income losses by 66% using laser land leveling technology and 75% of the farmers adopting DSR said they had reduced crop loss during the drought year. 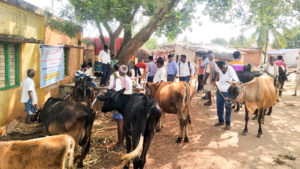 More than 70 livestock owners obtained animal healthcare services for about 230 animals in a veterinary camp organized recently in Lokur village of Dharwad district, by KVAFSU, Bidar, Department of Animal Husbandry and Veterinary Services, Dharwad and ICRISAT.

Horticulture: Dr PC Tripathi, Principal Scientist, Indian Institute of Horticultural Research (IIHR) said that in July 2019, a scion bank was established. As many as 150 plants were given to each of the four Krishi Vigyan Kendras in the project area to be demonstrated on 0.2 to 0.4 ha. He spoke of demonstrations for fruits such as guava, papaya, avocado, custard apple and vegetables like yard bean, tomato, brinjal and french bean. Special mention was made of the successful cultivation of mushrooms and flowers. 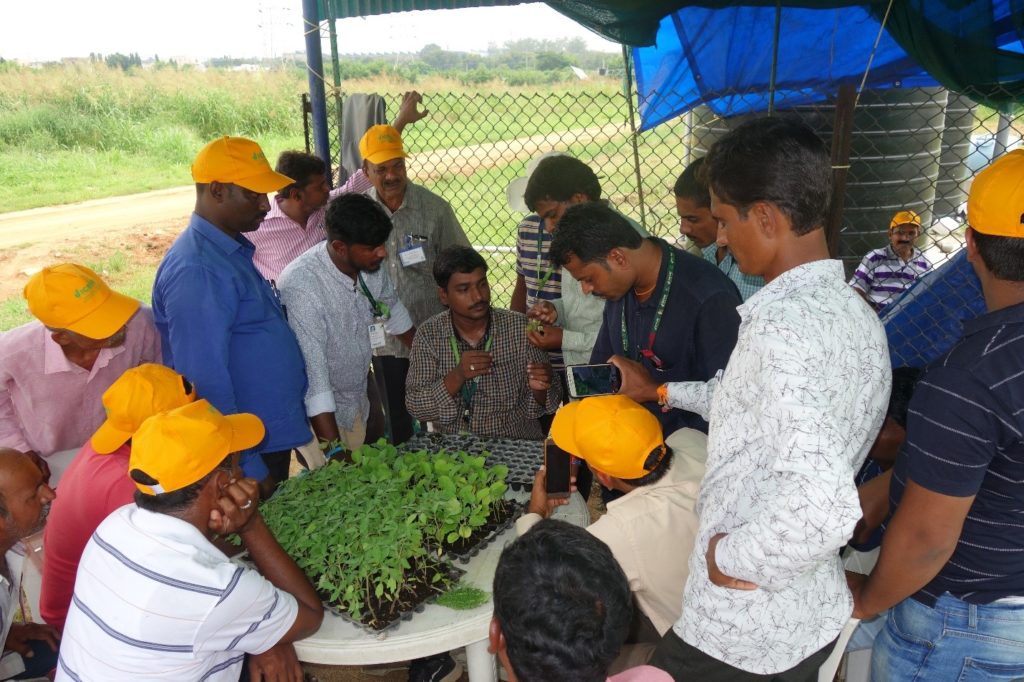 Prior to the meeting, a 3-day vegetable grafting workshop was held at ICRISAT. Five farmers from each of the four Bhoosamrudhi districts were given hands-on training in grafting vegetables like tomato, cooker beet, and chili. The technology helps increase yield, longevity and build disease resistance.