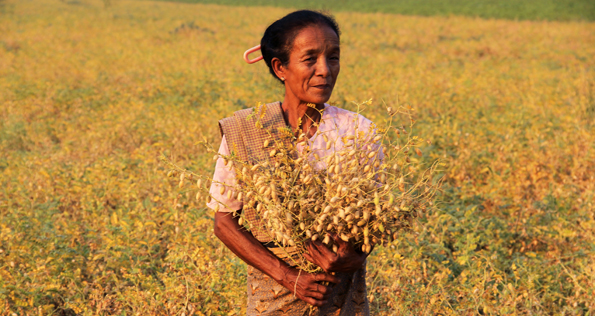 Developing legume crops that can withstand climate extremes i.e. both scarcity and abundance of water and rising temperatures topped the research priorities identified at the International Workshop on Promotion of Pulses in Asia.

Other constraints and challenges in legume crops that were identified in the context of climate change include tackling new types of diseases, enhancing crop production with less resources (land, water, etc) and providing farmers access to superior technologies.

To address these issues, the coordinating institutions of Collaborative Legumes Asia Network (CLAN)—The World Vegetable Center (AVRDC), International Center for Agricultural Research in the Dry Areas (ICARDA) and ICRISAT shared their work plans in a separate meeting. The participating CLAN countries came up with a plan for undertaking the following:

The workshop was organized by Seoul National University (SNU) in collaboration with CLAN coordinating institutions from 30 November to 3 December.

In conjunction with the workshop, the Steering Committee of CLAN also held a meeting coordinated by Dr Rajeev Varshney, Research Program Director, Grain Legumes, ICRISAT. Dr Ashutosh Sarker, Regional Coordinator and Food Legume Breeder, South Asia and China Regional Program, ICARDA, said, “We are glad to see the revival and revitalization of CLAN after a gap of more than 10 years.” Dr Ramakrishnan Nair, Vegetable Breeder-Legumes, South Asia Regional Office, AVRDC, said, “It is great to see a network of like-minded organizations to enhance the productivity of legume crops in Asia.”

New mandate crop: The committee approved inclusion of soybean as one of the mandate crops, the others being chickpea, pigeonpea, groundnut, lentil and mung bean. Black gram, faba bean, cowpea, grass pea and adzuki bean have been included in the ‘Tier 2’ legume crops after detailed deliberation and considering the importance of various legumes in Asian countries.

New countries included: The committee also approved the inclusion of three new countries – Afghanistan, Uzbekistan and Kazakhstan – on the recommendation of ICARDA. Chickpea, lentil and mung bean are important legume crops in these countries.

The committee adopted and approved the name of CLAN as Collaborative Legumes Asia Network after detailed discussions. Dr Tun Shwe, Director of Food Legume Section of the Department of Agricultural Research, Ministry of Agriculture and Irrigation, Myanmar, was elected as the Chair and Dr Zong Xuxiao, Professor and Group Leader of Food Legumes Research Group, Institute of Crop Sciences of Chinese Academy of Agricultural Sciences was elected as the Deputy Chair. The members also discussed their support and collaboration to the CGIAR Research Program on Dryland Cereals and Legumes Agri-food Systems (DCLAS) and also capacity building activities in collaboration with APAARI.

Plans are being made to organize a workshop on pulses in Myanmar or China in view of 2016 being declared by the United Nations as the International Year of Pulses. CLAN is co-facilitated by ICRISAT, ICARDA and AVRDC with the support of APAARI.