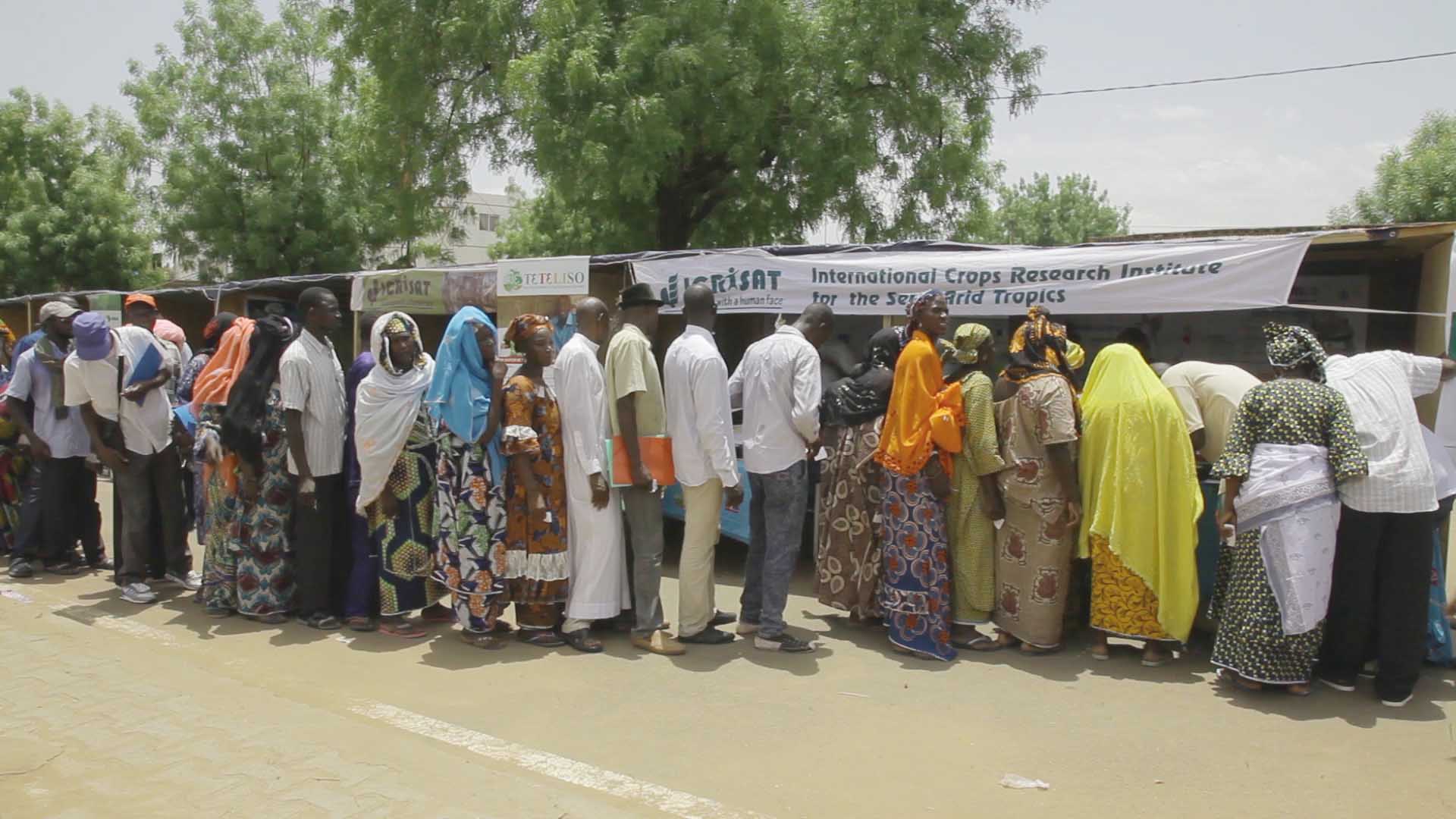 Aiming to increase awareness of farmers on climate resilient varieties of groundnut and maize and create opportunities to network with diverse players along the value chain, two seed fair programs were organized at Sikasso and Kayes regions of Mali recently.

The objectives were to:

The fairs included plenary sessions, group discussions and exhibition stands where 65 partners, including government agencies and private sector, exhibited their products and services to about 400 participants. The fairs offered an opportunity to create linkages that will help promote processing and value addition in Mali, Niger, Nigeria, Burkina Faso and Cote d’Ivoire.

“The seed fairs have helped create partnerships among stakeholders for a better dissemination of new varieties,” said Mr Siaka Dembélé, Representative of the Regional Agriculture Directorate, Mr Dembélé also stressed on the continuity of such events as it provides training to extension agents, so they can advise more producers.

Around 300 farmers received mini-packs of improved groundnut varieties from ICRISAT through a voucher system. Along with the seeds farmers were exposed to appropriate agronomic practices and market links.

“I came to learn more about the new improved seed varieties. But more importantly I learnt about new practices. For example, I keep my seed with the rest of the crop that is highly vulnerable to insect attack. I do not measure the extent of damage caused by these insects on my seed. Now I am aware of that,” said Mr Seydou Diallo from Nangola village, rural commune of Niéna in Sikasso region.

Farmers discussed the challenges, constraints and opportunities in the seed production systems in West Africa. The dangers associated with aflatoxin contamination and how to mitigate it was stressed. Farmers were made aware of diet diversification and climate change resilience strategies. Commercial seed producers and processors were able to understand farmers’ needs, tastes and concerns.

“I learned that you can turn groundnuts into nutritious food. This encourages us to embrace this cultural advantage in Cote d’Ivoire. During the exchanges, we also learned that market access is a transboundary challenge for all stakeholders, including producers of all countries,” said Mr Diedhiou Augustin, a farmer from Korhogo in Côte d’Ivoire.

Ms Mariam Sissoko from the village of Same in Kayes region appreciated the participation of women during the fair and said “Women have spoken and expressed their views on important issues such as production, processing and marketing of seeds.”

The farmers were interviewed using structured questionnaires to evaluate the impact of the seed fair. Farmers were also willing to be part of the after-fair impact assessment study, intended in August 2016, after the planting period.

The fairs in the Sikasso and Kayes regions were declared open by the Governors of the respective regions, in brief opening ceremonies. Delegations from Institut d’Economie Rurale (IER), Direction Regional de l’Agriculture (DRA), Conseil Regional and various stakeholders including farmers, representatives of farmer associations  and cooperatives, seed companies, seed processors, local and international NGOs and other Mali agricultural professionals attended the events. The participants expressed that the program should be conducted annually.