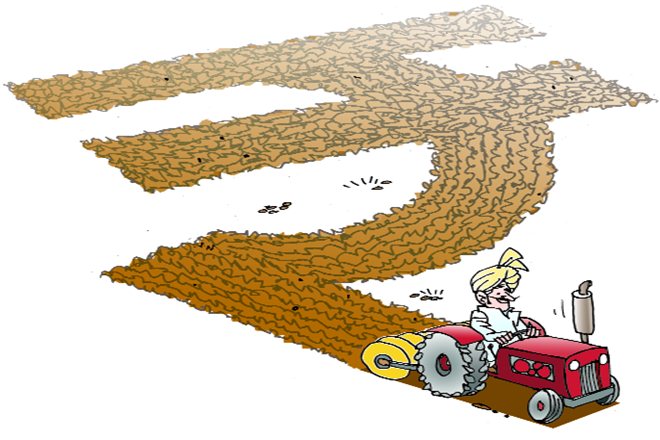 At a time when weather variabilities have become quite common, government interventions to assuage the farmers from price-volatility, apart from climate-risks, have to be at the forefront of policy agenda.

Reforms on agri-marketing, contract farming, and land leasing apart from an aggressive export policy are what driving agri-growth requires.

In the general Budget this year, the Centre had announced that Minimum Support Prices (MSP) will be fixed to give a profit margin of 50% over the “cost of production” in major kharif crops. With the onset of the southwest monsoon and the sowing of kharif crops having already begun, the Cabinet approval for hiking the MSP for 14 kharif crops could not have been delayed further. In line with the Budget announcement, the increase in the support prices is a welcome move. With the forecast of a good monsoon this year, this could substantially help in raising the incomes of farmers across the country.

As per the Cabinet decision, the MSP for common grade paddy has been raised by Rs 200 from the existing Rs 1,550 a quintal, which is a 13% hike over that of last year. Similarly, the hike in the case of coarse cereals (consisting of millets, now referred to as nutri-cereals after the April 2018 notification of the Government of India) as well as for cotton has been very significant. In case of finger millet (ragi), jowar (sorghum) and bajra (pearl millet), the increase in MSP is 52.5%, 42% and 37% over last year’s prices of Rs 1,900, Rs 1,725 and Rs 1,425, respectively. With the Centre aiming for the ‘nutritional security’ of citizens, this is indeed a very significant step, more so given it comes in 2018 that has already been declared as the national year of millets. With increasing preference for nutritious food crops from consumers, mostly from urban areas, cultivation of climate-resilient nutri-cereal crops may get a push in the coming years. Among the pulses, moong has seen a quantum jump in its MSP, increasing by Rs1,400 from last year’s price of Rs 5,575 per quintal. The increase in tur (arhar or pigeon pea) and urad MSP has been of Rs 225 and Rs 200, respectively. The new MSP for medium- and long-staple cotton has been raised by Rs 1,130 (for both) from the existing Rs 4,020 and Rs 4,320 per quintal.

To make the MSP mechanism sustainable, and to truly address concerns of the farmers, we list here a few suggestions that may rejuvenate the agriculture sector in India:

At a time when weather variabilities have become quite common, government interventions to assuage the farmers from price-volatility, apart from climate-risks, have to be at the forefront of policy agenda. Ensuring remunerative prices for marketable farm produce is one of several pathways to achieve the ambitious doubling of farmers’ income (DFI) objective of the Centre by 2022. However, higher MSP alone cannot solve the myriad problems Indian farmers face today. Doable policy initiatives suggested above, coupled with an efficient procurement of the food grains and agri-commodities at declared support prices with the help of technology tools, can make Indian agriculture both profitable and sustainable.