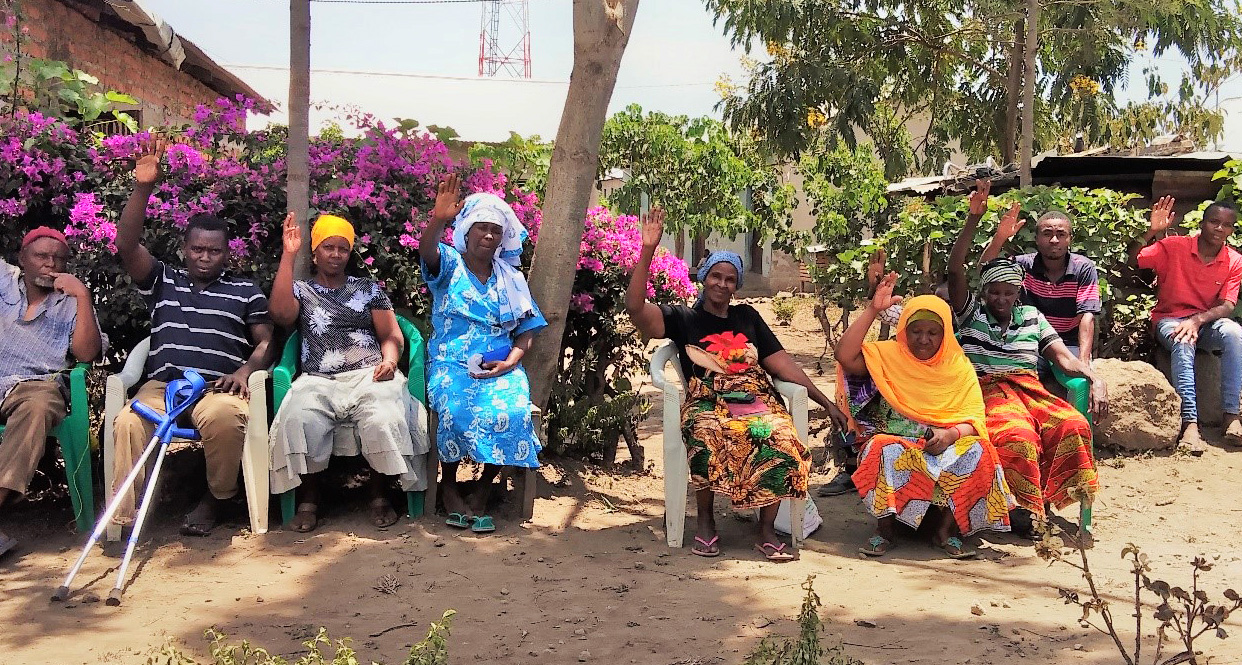 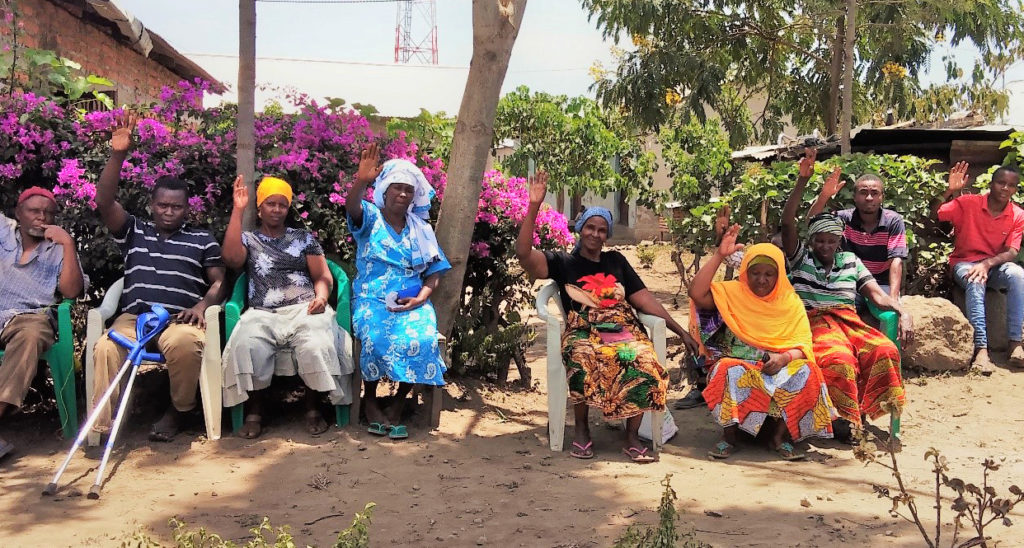 Kikatiti farmers who were motivated to grow pigeonpea. Photo: Jayashree B, ICRISAT

Ashish Goswami looks reflectively at the large godown, in Arusha, Tanzania, the white bags accentuating the lines of concern on his face. When the going is good, there would be over 200 people working in that space. Now, two security guards open up the locked door for us to take a look at the lonely bags gathered silently in the storehouse. The company Ashish works with is one of the leading exporters of pigeonpea from Tanzania. The raw pigeonpea exports go mainly to India, where, known as toor or arhar, they form an important part of the daily diet of millions of Indians.

The past couple of years have been tumultuous for the global pigeonpea industry. India is the highest consumer and was also the highest importer of this legume. Approximately 50% of these imports come from Myanmar, while another 50% come from Africa – with Tanzania contributing the maximum. There was increased domestic production – pigeonpea production in India almost doubled in 2016-17 from the previous years. Along with this there was a change in trade regulations by the Indian government to support domestic farmers/production leading to a drastic dip in exports of pulses to India. This led to off-set producer prices in Tanzania. As much as 90,000 tons valued at about US$ 80 million, were being exported to India from Tanzania two years ago. In the previous year, it was just about 30,000 tons. Farmers in Tanzania produce pigeonpea with their eye on exports. So this year, exporters are holding much of the previous years’ stock after processing and hoping for movement. 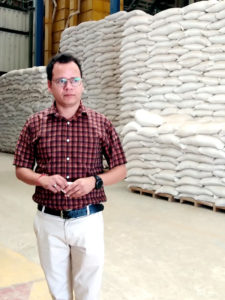 Right now, we have one thousand tons of pigeonpea packed and ready. We are hoping that soon a window will open up for sending several such batches to India.
– Ashish Goswami, Manager, Export Trading Company Ltd. Tanzania

About 50 kilometers away, the same concern is mirrored in the eyes of farmers of Kikatiti. They practice maize and pigeonpea intercropping, mostly with their eye on the market. Across most of sub-Saharan Africa, maize is easily procured and consumed as a staple. Traditional pigeonpea variety (Babati white) grown by farmers however, succumbed to Fusarium wilt. High-yielding wilt-resistant varieties introduced a few decades ago from Kenya through the years, became increasingly popular fetching a good market price and progressing well as a complementary crop to maize. While experts put consumption rates in the African region at 67%, small farmers are usually growing these to reach export companies. Now with trade changes, procurement rates have fallen at least by 50% and the farmers are unsure about the season ahead. “Why has this happened?” they ask us. “What should we do now?”

Dr Stephen Lyimo, known in the scientific community as the ‘father of pigeonpea’ in Tanzania, is visibly upset as he talks to them and facilitates the discussion. “I told these very farmers to cultivate pigeonpea; we helped them with better seed varieties and they got a good profit till two years ago. Now after the export market has fallen, these same farmers are affected. I owe them an answer.” As he explains the global trade dynamics, the group listens unsure of what to make of it. Most of them, small and marginal farmers, own about 2 hectares of land on an average. It seems they would like to continue their maize and pigeonpea crops this year as well. Thousands of miles away, actors beyond their sphere and policies beyond their country, would now decide the fate of their crop.

In Babati District in Manyara region, it was evident that pigeonpea farmers have not stopped producing the crop despite the decline in prices from farm gate price of TSh 2800 (about US$ 2) in 2014 to a mere TSh 300 (US$ 0.13) in 2018. Veronica P Aloyce, a farmer in Gendi Barazani sells her pigeopea produce at TSh 300/kg but apparently, purchases dehulled pigeonpea at TSh 7000/kg for her restaurant where she prepares pigeonpea products for local customers. Dehulling loss is a mere 20% and she feels that she makes a huge loss because of her incapacity to dehull by herself. Perhaps one of the constraints to consumption of pigeonpea is the lack of avenues for local value addition.

It’s a catch-22 for institutions like ICRISAT that are working both with Indian and African farmers. In 2015-16, prices of pulses became a major political issue in India. Farmers in the country motivated to cultivate pulses to achieve self-sufficiency, found prices dropping due to imports. The Government of India had to step in and limit import agreements with Tanzania to deal with huge buffer stocks from previous years’ production/imports in India. This had a cascading effect on farmers in other countries. ICRISAT has also been promoting improved pigeonpea varieties through the NARS across different Indian states and with good rates of adoption.

Step back to Tanzania, companies are now provided a window each year, when they can export to India. The market for processed pigeonpea is still available in countries such as Canada, USA, UK and UAE, but this market is relatively small, compared to the raw pigeonpea that only India imports. Ashish who procures the best quality pigeonpea available in Tanzania for his company from farmers of Arusha, now obtains them at between 400 – 900 TSh per kg, (US$1 = 2300 TS), with the reduced trade prospects. This is not viable for farmers. During the previous season, many farmers did not even harvest their crop as the price they were offered would not even cover the cost of harvesting. For companies, with possible storage for about a year or a little more, if a window does not open up for imports, it is unlikely they can hold on indefinitely. This puts the fate of millions of farmers, cultivating pigeonpea on 273,597 ha across Tanzania at risk – a scenario, which they are not in a situation to face. 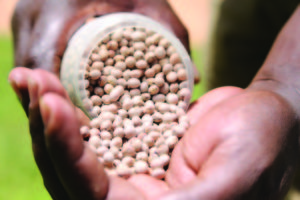 Domestic consumption has huge potential, however. The Smart Food project has taken on the challenge in Tanzania to reduce the risks to farmers by building domestic demand and expanding markets. At the same time this will focus on diversifying staples with more nutritious and environmentally sustainable crops for the drylands. An analysis by the Smart Food project economist showed that schools in Tanzania have a potential to create a market for 700 metric tons of pigeonpea per week valued at US$ 300,000 and 140 metric tons of sorghum and finger millet per week valued at US$ 200,000.

Some concerted efforts were taken to deal with this situation. One, the Government of Tanzania initiated a process to encourage domestic consumption of pigeonpea. This was through procuring this for schools. About 79 institutions were roped in to take this effort forward. Also, the government encouraged schools to procure pigeonpea and included it in the cooked meals for school children. These efforts reached about 23,000 farm families through 79 institutions.

Pigeonpea recipes were piloted through the  Smart Food project led by ICRISAT in Tanzania, with positive feedback from rural schools where over 2,000 students were surveyed noting that 87% of students changed their perception of pigeonpea and 91% voted to keep them in their school meals. The project in collaboration with the Somni project undertook similar analyses with entrepreneurs and the food service industry in urban markets of Arusha, also identifying strong domestic consumer acceptance.

Also, a series of initiatives were taken to push more export market within Africa, in countries such as Malawi and Mozambique. “The domestic market for pigeonpea has huge potential. Rather than focusing our attention on the exports, by increasing consumption we can make a big difference to the incomes of smallholder farmers,” says Dr Moses Siambi, Research Program Director, East and Southern Africa, ICRISAT. These efforts however, still need to be further strengthened to boost consumption within the country. The volatile prices dominated by an export-oriented market indicate an uncertain future for farmers. 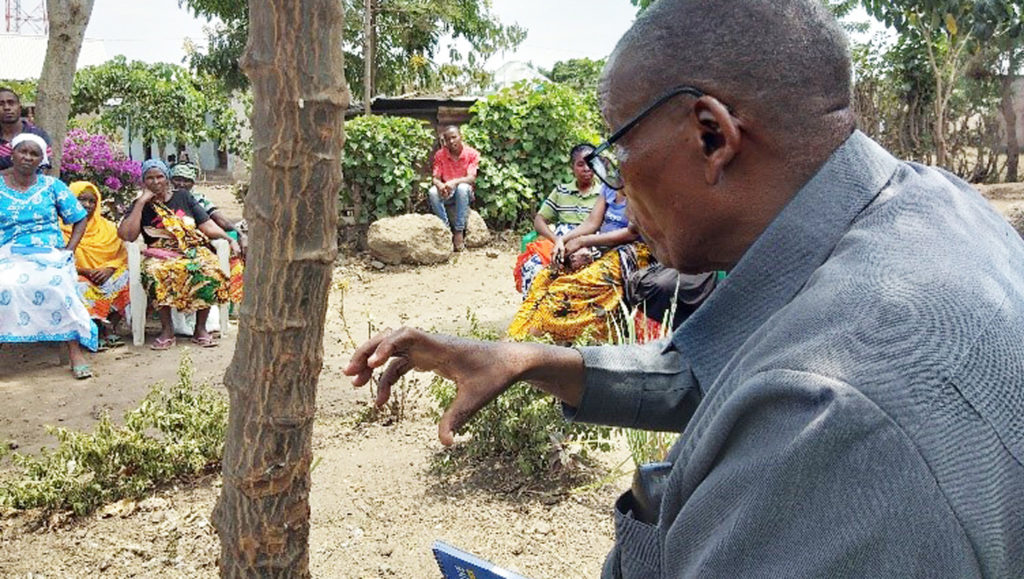 Stephen Lyimo talking to farmers of Kikatiti about pigeonpea.

How is this being dealt with? Farmers in Tanzania consume pigeonpea both as green peas and dry grain. In coastal areas during Ramadan, green pigeonpea is one of the preferred relishes. However, use of mechanical shellers and dehullers at community level will help increase utilization. Promotion of simple recipes at household and community levels will enhance price stability and nutritional security.

The long-term production and import trends in India indicate that soon India is going to open imports. However, this may still not be a complete solution from both nutrition as well as the economic perspectives for Tanzania. For long-term sustainability, food product diversification, value addition, local consumption and looking for alternative markets will remain the key.