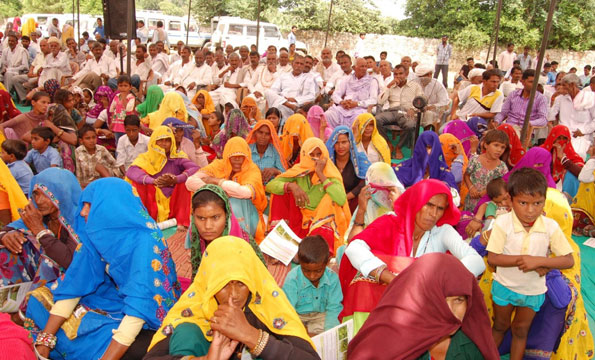 Farmers in the Indian state of Rajasthan consider short-duration pigeonpea varieties a boon as the crop requires fewer inputs, thrives well even under limited water conditions due to its deep root system, and matures in 120 days. This gives farmers the opportunity to grow postrainy season crops like wheat, chickpea and mustard.

Earlier, farmers avoided pigeonpea due to its long maturity period. But introduction of short-duration varieties in the region have encouraged more farmers to grow pigeonpea. Villages of Jaipur district (Padasoli and Badwa) are known as pigeonpea villages as traditional crops like pearl millet have been replaced by pigeonpea.

Karauli district of Rajasthan was originally a traditional area for pigeonpea. But over the last two decades farmers have stopped cultivating pigeonpea due to unavailability of quality seed. A progressive farmer Mr Himmat Singh of Malupada village of Karauli was selected to demonstrate the short-duration variety, ICPL 88039, developed by ICRISAT.

During the 2015 cropping season, more than 1,500 ha has been covered in nine districts of Rajasthan (Jaipur, Dausa, Alwar, Karauli, Sawai Madhopur, Bharatpur, Tonk, Dhaulpur and Ajmer) by the short-duration pigeonpea variety. Under the project, the area under pigeonpea in Rajasthan has expanded to more than 5,000 ha and its performance has encouraged more farmers to adopt this variety.

Dr CV Sameer Kumar, Coordinator and Senior Scientist, ICRISAT, elaborated on the package of practices in pigeonpea cultivation, selection of suitable variety for dryland conditions of Rajasthan. He explained the ‘one village one variety’ concept for seed production and also about farmers’ participatory seed production program, which can help farmers get quality seed at village level.

Dr Anupama J Hingane, Principal Investigator and Special Project Scientist, ICRISAT, briefed farmers about project activities and improved pigeonpea cultivation technology along with short-duration varieties and hybrids developed for Rajasthan. Further, emphasizing the role of women farmers in agriculture, she encouraged women to take up pigeonpea cultivation in their fields, and also get involved in various activities like seed production, post-harvest processing and other value addition activities like weaving baskets out of dried stalks of pigeonpea. She urged male farmers to support their wives and daughters. Convinced by the returns earned by the farmers in Jaipur district, 150 women from four other districts have expressed their willingness to take up pigeonpea seed production on their farms.

Mr Vijay Kumar, Senior Manager, ICRISAT, explained the advantages of early pigeonpea and dual cropping system. On this occasion, farmers shared their experiences in  pigeonpea cultivation. Officers from Department of Agriculture, Odisha, were also invited to the field day.

Visits to the pigeonpea fields were organized by Mr Uttam Chand, Scientific Officer, ICRISAT, and team, giving farmers an opportunity to see on-farm performance and also interact with scientists.

The field day was organized on 15 October by ICRISAT in collaboration with RARI, Durgapura.